This morning, we woke a bit later than usual, but still with plenty of time for a calm breakfast. I made the spaetzel and cheese that I had bought at the Hallstatt grocery store yesterday. The process wasn't too different than boxed mac n cheese, but the spaetzel had a completely different texture, the cheese was less sharp and more earthy, and the color much yellower than bright cartoon orange.
Today I had to drive again through light rain to get to our destination. It's a pity we didn't pick a more central place to stay in order to cut down on the driving, but we really were hoping to see some amazing sky. 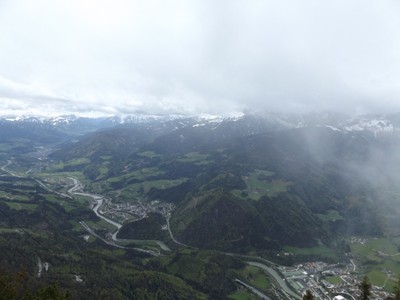 Eisreisenwelt is well-signed from the highway and we had no problems finding it or parking. In order to get to the parking, we had to drive up a mountain road full of switchbacks and hairpin turns. From the parking lot, we had more uphill to walk in order to get to the ticket building. From there, it's another 20 mins of uphill walking to get to the cable car (according to the map, but we found it to be less.) 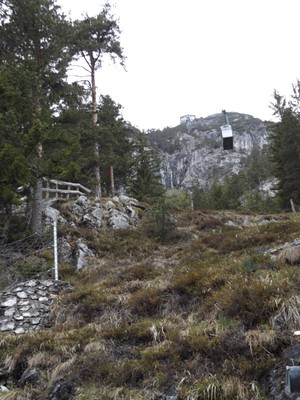 The cable car ride is only a few seconds, but it thankfully saves a bunch of walking. Still, it's another 20 minutes of uphill walking (again per the tourist map but we did it less) to the cave entrance. As it was raining still, we took a shortcut tunnel to shrink the "20 minutes" even more. Still, that's a lot of uphill walking just to get to the entrance. Despite shedding any winter gear, I was still plenty warm when we got to the cave entrance. 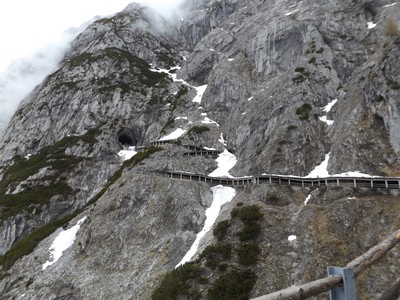 Hike to the cave


It's supposed to be 0° F/ 32° C inside the cave, and the entrance is also chilly enough to see your breath. As we waited there a bit for the tour to start, I started cooling down. The seating by the entrance was mostly wet, so I stood around, trying to find a comfortable spot. Periodically, I'd catch a whiff of something that wasn't quite sulfur and wasn't quite strong garlic. We couldn't figure out what it was, but it seemed to us as if the cave had it's own odor. 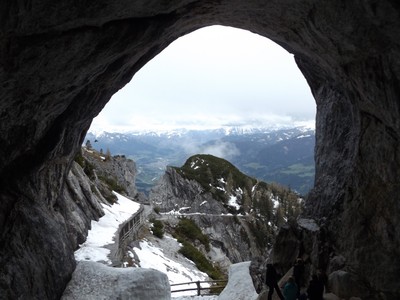 waiting at the entrance

The guide popped out of a little room in the cave. It looked like a lounge of sorts from the tiny peek I got. I find it funny to think that somebody built a modern-style resting space inside a cave.
Once we were gathered together, the guide told us that we'd be climbing 700 steps within the cave. After all the uphill from the previous days and all the uphill just to get to the mouth of the cave (which was about 1500m in altitude), I was not looking forward to more. But, I am certainly willing to do as many stairs as it takes in order to see something cool (pun intended).
The guide also equipped us with carbide lamps-as in small flames with a mirror behind them. Every 4th person was supposed to take one and share. I guess I was fourth, but I kinda wanted my hands free to hold the handrails and already had enough stuff to carry, so I let somebody else hold it. Apparently, they do this out of tradition, and not for any good reason. Also, at various points throughout, we'd stop and the guide would light up a big piece of magnesium wire so we could see that specific area well. Its ashes just fell where it was burnt, and there were piles of ash in the areas where the tour guides regularly stopped. I have to question why they wouldn't just use rechargeable LED lights or something modern that didn't pollute the cave or require burning fuel. I don't think it adds "romance" or adventure to carry the old-style lamps, but maybe that's just me.
In any case, once equipped, we entered into the cave and started climbing the stairs. The guide would stop every few minutes to let us catch our breath and to explain what we were looking at and how it got there.
Basically, water flows in to the cave through holes in the rock, but also as moisture as the wind bows through the cave. The moisture gathers into layers of ice, some of which are 5000 years old and look like sediment layers or tree rings. The condensation of the air moisture also turns to frost on the rocks of the cave, making them sparkle. And some of the water that drips in forms ice stalactites and stalagmites, or freezes in place in what looks like a frozen waterfall. Other features are formed as the winds blow through and carve away at the ice that has built up.
All of these phenomena combine to create beautiful features that change from year to year as the ice melts a bit or refreezes with the seasons. It was worth every one of the 700 steps each way to see the cave features. We even got to walk through a big ice tunnel at one point. And the stairs were surprisingly dry and not slippery, making for an easier climb. We were able to touch the ice, and at one point even get off of the wooden walkway and walk on it a bit.
I'm betting that they have to redo the walkway each season. It looked really new and I would imagine that the ice sometimes forms over the old one and so the pieces have to be replaced. Or maybe they just come and melt the ice from the stairs regularly.
Whatever they do, I appreciated their maintenance. We walked so many stairs that I actually stripped off my fleece and hoodie and hat and just climber in my regular long sleeve t for most of the way. At the top, we were no longer climbing, and I did eventually throw on some gloves and my unzipped fleece, but that was plenty. I didn't feel a coat was necessary at any point.
They wouldn't let us take pictures, but their site has some. Keep in mind, that these pictures are bright for some reason, but it was much darker in the cave.
By the time we emerged from the cave, the sun had come out again and the view was stunning. To extend our enjoyment a bit, on the way down, we stopped at the restaurant on-site. Even though it's clearly for tourists, the food was really good and not ridiculously priced. My spaetzle and cheese was amazing. They had all these little pieces of caramelized onions and chives in with a super gooey cheese sauce. My guy got a goulash that he really enjoyed, although he fed his bread to some crows that had perched nearby. As soon as he started, more came. And he fed them. And more came. At some point, they were all swooping around trying to take the food that we weren't trying to share with them. And they were hopping on our table. I felt like I was in the Hitchcock movie. 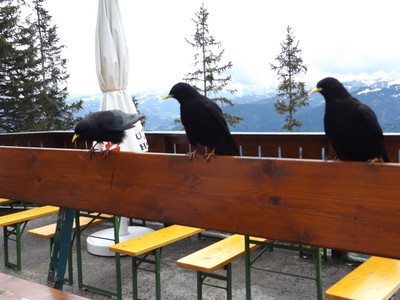 birds who want to steal our food

The next potential site on our list was the Grossglockner Alpine Road. But, we've been driving and hiking and cable -car-ing through the alps for days now and didn't feel the need to pay $35 to do more of the same.
We did take the scenic route to Innsbruck though. We had a bit of rain, but for the most part, we had bright sunny views of the alps and the verdant mountain valleys. 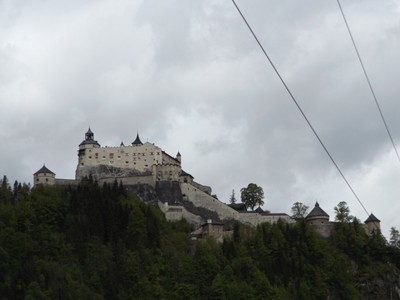 In Innsbruck, we wanted to see a traditional slap-dancing show. The hotel reception told us that there should be one in the downtown area and marked the map. She also mentioned street food in a street market, which sounded exactly like what we wanted for dinner.
We tried to find the building marked with an x, but it didn't seem to exist. What we did find was some sort of massive street fair with blocks and blocks of crowds enjoying the entertainment. We decided to check that out instead. 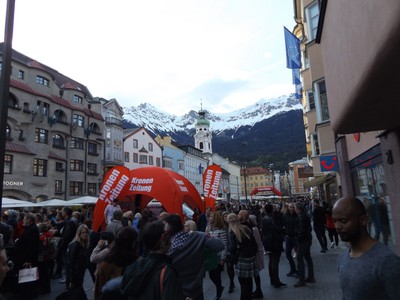 
We watched groups of kids prepping for their dance routine on one block. On another, a band covered American pop hits. A different corner featured a flamenco guitarist with an accompanying stomper. When we went back around, the entertainment had changed and there were stilt dancers in place of some other performers. My favorite entertainment was the large crowd in one of the squares that was all dancing to Gente de Zona's Macarena. When that song ended, someone said some stuff in German, and then Daddy Yankee came through the speakers and the crown danced again. I feel very connected here because they listen to the same music as me. Even the radio stations I've been hearing as I drive have a ton of Latin American music. 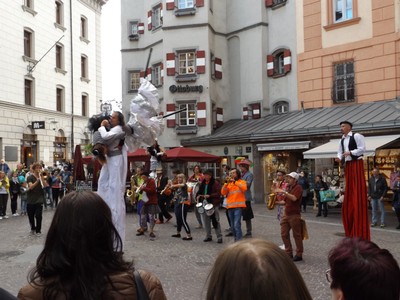 The big difference between this street fair and most of the others I have been to is their lack of street food. For a fair that stretches several blocks down the main street and then spills onto several side streets and plazas, 2 hot dog tents didn't seem like enough food. Where are the fried stuff-on-a-stick stands? Where are the people roasting cinnamon rolls or selling cotton candy or pretzels? 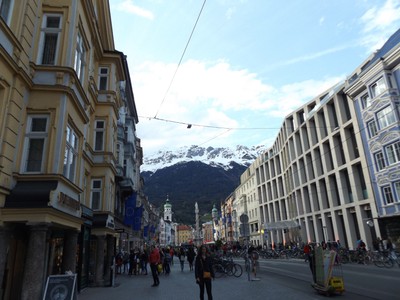 We ended up going into a shop to get the beginning of dinner, still hoping to find something else on another side street somewhere. We thought we were getting a slice of pizza to split. Technically, we did. This "slice" was about the size of a normal medium pizza- much more than we were expecting. Plus, we didn't just get plain. We got "ruccola" which basically means they take a salad- dressing and all- and dump it on top. I was surprised at how much balsamic dressing improves pizza. So now, we had each had a full meal, while intending to have a snack or appetizer.
We kept walking toward the market hall though. As we walked down the path by the river, looking across at the neat tidy houses in front of an almost too-good-to-be-true idyllic mountain backdrop, we understood why people would want to live here. I'm not sure one could ever tire of looking up at those majestic peaks that are visible everywhere in the city. 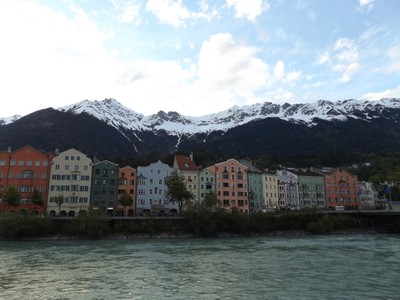 Innsbruck by the river

The market hall was open, but most of the individual stands were closed and covered sheets or tarps. One vegetable stand remained open for late evening shoppers, but the only other businesses not shuttered served prepared foods. We popped into a cute little food bar with a simple 3-choice menu written on a chalkboard. The waiter out front piqued our curiosity with his mention of veggie balls. They arrived on a bed of cabbage that was either caramelized or mixed with caramelized onions, yet was still a bit pickley and under a frothy veloute. The sauce and bed were so amazing that we didn't notice that much about the balls. This is a dish I need to figure out how to make at home. So far, it's the best thing I've eaten the whole trip.
Having wandered circles around old town and seemingly exhausted that entertainment, as well as any street food stands, we went to the mall to see if we could find ourselves some apple strudel for dessert.
As we entered, a DJ blasted pop music as about a dozen kids danced on a marked-off dance floor. I don't mean teenager kids. He was mostly playing to the under-6 crowd. I found it amusing to watch 3-year old children toddle-dance while the speakers screamed "it's Britney, bitch.
In the end, we didn't find our strudel, and walked back to the hotel without it.