This morning, we were super-efficient due to our preparations last night. Upon waking, I immediately made the leftover almond bread, eggs, and milk into French toast while my guy cleaned his stuff up. We ate it with the leftover fig jam and some vegetables. We released the boat and my guy drove us back while I got showered and dressed.
We had some water issues where the pressure would be ok for a few seconds and then barely a trickle would come out. I had to turn it off and repeat. I'm guessing some air got into the water lines when we were low yesterday. Still, I was able to finish showering and dressing by the time we needed to park at the Homps base.
My guy cleaned the outside of the boat while I finished the dishes, cleaned the bathrooms, and got the inside stuff packed. We could have sprung for an add-on where they take care of the cleaning (other than the dishes, which you still have to do), but we didn't mind the work. And it was kind of neat to "swab the deck" like a pirate.
We were ready at 9, but so was everyone else, and they were in front of us in line. As the office didn't even open until 9, it seemed they didn't much care if people were exactly on time or not. The checkout was easy. They basically just see how many hours you used the engine (10 in our case) and give you some of your fuel deposit back based on what you used. Then, you're on your way.
We got back on the road. We passed a baguette vending machine at a gas station. That goes on the "only in France" list.
The drive wasn't so different from the rest of the driving we had done- lots of vineyards and farmland dotted with the occasional small town. 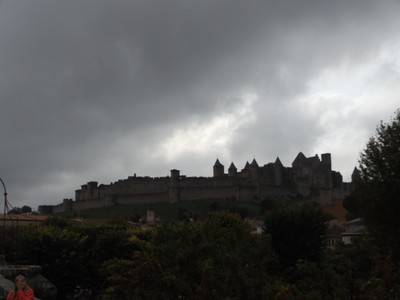 We parked in downtown Carcassonne and walked to the castle. The downtown is actually a decent walk from the castle, as opposed to inside the castle. I found out on the tour that when the French/Aragon (Spanish) border moved south so that Carcassonne was no longer a border fortress, the castle ended up in disrepair and filled with rubble houses and the main city was built up nearby. Even though people kind of lived inside of it, it needed serious restoration before it became a tourist attraction.
The audioguide to the castle spent quite a lot of time talking about the restoration and the research that went into it. But I learned all sorts of other information from it as well. The base of the castle goes back to Roman times, and they just built more parts on top of and around the original, which isn't so different from any other castle I've seen. What is a bit different is how it was built. The Romans started the base of the walls with rubble rocks (not stones cut into blocks). In order to level them, they put in a layer of bricks. So the bottom of the castle has a red stripe running through the stone. 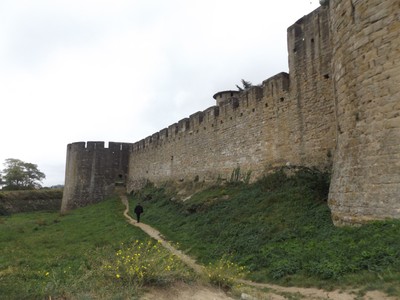 When the Romans were done, the French used the castle, although the family that ruled the castle was far from the French king. They added lots of defenses so that the castle actually had double walls, plenty of "murder holes," and towers that one could see all the way to the Pyrenees mountains from. 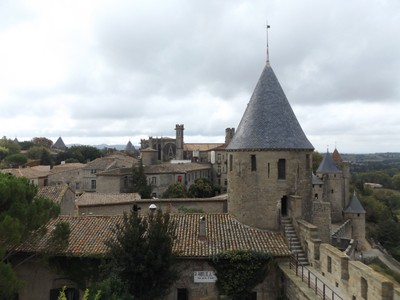 The Trastavere family ruled the area until the Pope got upset by a Christian sect he decided were heretical, the Cathars. He decided to send the French king on a crusade (around the 1200s) to massacre the Cathars and remove the Trastavere family from power, as they were tolerant of the Cathars, even though they were Catholics themselves. The castle was sieged and Trastavere chose to surrender it and himself in exchange for the people being allowed to leave alive, although they weren't allowed to bring anything with them.
After that, the castle was never taken again. In fact, the French king fortified it more, the the point it was so imposing nobody wanted to even try. It stood as a French outpost on the Spanish border until the border moved, at which point the castle declined. 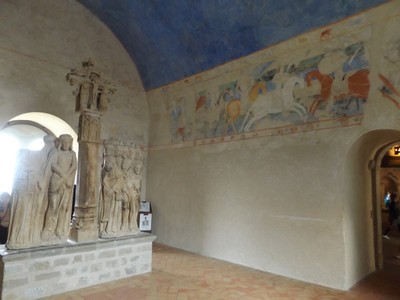 I'm guessing it's the closeness and the border fluidity that causes the people in this are to share a lot of the Catalan/Spanish culture. I've seen lots of Catalan flags here, as well as paella restaurants, and up until now, I really just associated paella with Spain.
From Carcassone to Toulouse is only about an hour or so drive, and it's back on the highway. The speed limit on the highway is 130 km/hr when it's sunny and 110 km/hr when it's rainy, according to the signs. But our rental car seriously struggles with 130. If you had a decent car, it's probably less than an hour.
I enjoyed driving in the pleasant weather. The radio here plays a nice mix of English, Spanish, and French hits, which made the drive feel not so long. 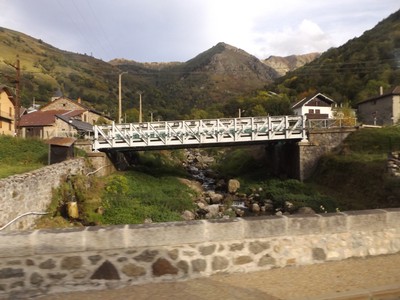 We got to the airport with plenty of time to spare before the bus left for Andorra, so we sat and read. The bus, which is more like a hotel shuttle than a mini-bus, arrived on time and loaded up. It has wifi, although they limit your data. It does not have a bathroom, despite the long ride.
We did make a stop at the Andorran border where some people used the restrooms, but I'm pretty sure we only stopped because two people on the bus had passports that required it. The rest of us just stayed on the bus while those two people were taken off by an official and processed. In about 10 minutes, we were on our way again.
The scenery had changed from rolling hills and farms to mountains covered in forest with the occasional grazing area. We passed through some small mountain towns of similar size to the towns we have been visiting in the French countryside.
In Andorra, we started passing huge ski lodge areas instead of small towns. It's not ski season, so they didn't seem to be operational, but any one lodge could contain more people than most of the towns we passed, and we never just saw one lodge by itself. They always came in herds.
Andorra la Vela, the capital of Andorra is much bigger than these small towns or even the lodge areas. It has proper traffic and more than just one road running through. Some of the buildings have enough stories to warrant elevators.
Surprisingly, the city is fairly flat. It's surrounded by mountains on all sides, but the main part of town isn't built into the mountainsides. Our hotel was "uphill" from the lower part of town, but that really just meant climbing 2 flights of stairs.
We're staying at a cheap simple hotel, and while it's clean, the room is tiny and the window opens up onto a cement wall. But, compared to the boat, it's huge. More importantly, the water pressure is great and we can take longer showers. 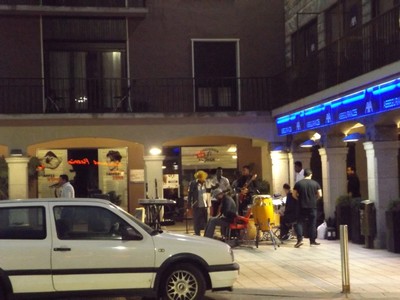 After getting settled, we headed out to find dinner. There are so many choices, even just within a few blocks of our hotel. I heard some music, so we headed towards the sounds to check it out. A band was playing in the street and a small crowd had started to gather around. Some people were dancing and others just sat at the outdoor tables for a nearby bar/restaurant and watched. We decided to eat at that bar/restaurant to continue to enjoy the music. My guy got some tapas and a burger, while I got burrata and patatas bravas. While it was certainly not the best burrata I've ever had, it was impressive for bar food.
By the time we left the restaurant, the crowd was much bigger and was dancing much more. We danced a bit in the back before heading off to explore more of the city. 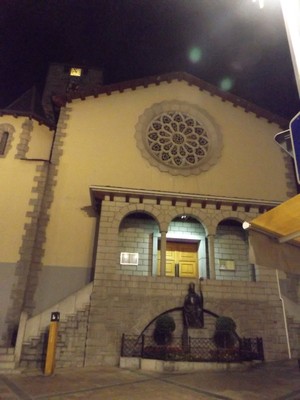 As we wandered around, I was surprised at how many shops were still open late on a Friday night. Mostly though, tons of restaurants fed hungry patrons. Before the night was over, we had stopped in two more of them to get another burger and some dessert. Compared to French food, the food we've eaten here is not so great. If we hadn't just been in the south of France, I'd probably be more complimentary towards it.