Sunday, I finally said goodbye to the Caribbean. While I can say I was sad to leave St. Kitts, I wasn't all that upset at leaving Barbados. The other islands had been nice, but I much prefer traveling with friends. Also, I was headed to see my little sister in San Francisco, which I was pee-in-my-pants excited about. The first day in San Fran, my sister took me to the pier and wharf. I was especially excited by the food market. There were all sorts of foodie-fun things to look at, taste, and buy. Also, we saw Alcatraz, the seals, and the shops in that area. We ate at Boudin, THE San Fran sourdough restaurant. Unfortunately, my camera died and so I have no pictures. Also, I've been to San Fran a few times before, so I was being less of a tourist and doing more catching up with my sister. Tuesday, we mostly hung out, but I went down to Stanford to visit my cousin for dinner. Wednesday, I met a friend to go on a tour of the Winchester House. Apparently, the lady who married the guy in charge of Winchester guns felt that “people don't kill people, guns kill people.” She went to a psychic in order to determine how to pacify the ghost of the victims of gun violence. The psychic said that she must start to build a house and never finish building. So, for the next several decades, she built and built. The result is a HUGE mansion with all sorts of crazy architectural features. There are doors to nowhere, windows that have a view of a wall, towers good for spying on the kitchens below, and furniture painted with a feather to look like a different wood. The tour itself is pretty interesting. I wish I could show pictures of the inside, but they ban those and with only 2 people on the tour, I wasn't going to be able to sneak any. 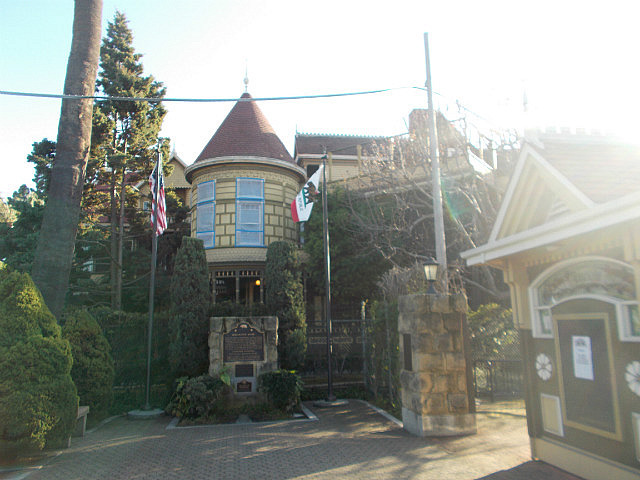 The Minnesota State Fair is quite a sign to see. There are acres and acres of display buildings, random food on a stick, and events. While we didn't get Journey tickets, they were playing the night we were there and we could hear them from by the stadium.

Highlights of the fried crap on a stick we ate/saw (and other foods): bucket 'o cookies (we just got the mega cone) deep fried fruit on a stick (actually, pretty bad) fried pickles pickles on a stick lefse (potato dough with cinnamon sweetness rolled up in it) fried cheese on a stick ginormous hot dogs mineapple pie on a stick nut rolls pork chop on a stick alligator on a stick corn on the cob (drenched in buttery goodness) fried rice balls deep fried beer and of course, a local favorite, deep fried cheese curd.

Even though we walked around a lot, I'm pretty sure all the crap we ate cancelled out any benefit the walk might have provided. 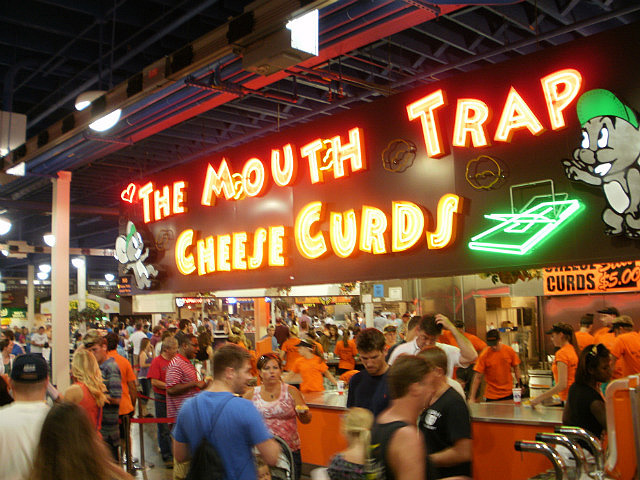 We had some time between connecting flights, so we first explored the airport as we waited for a friend to call and let us know where to meet her. The airport has a cute little airplane museum and library. There's also a "zen lounge" where cell phones are banned.

After waiting, we headed down town. We stopped by a little art fair and had Alicias tamales off a cart. They were some of the best tamales I've had. One of the artists at the fair suggested we catch the bus to Haight Ashbury, so we did.

Apparently, this is the "hippie" part of town. That's ok, I found the Anarchist Bookstore so I was happy. There were also record stores that actually sold vinyl, and of course the "dispensaries" that the area is famous for. It was artsy and neat.

We didn't have much time there though, we had to catch the bus back to the airport. We were about 60 seconds away from having our seats given to the people on standby for the flight, but we made it! 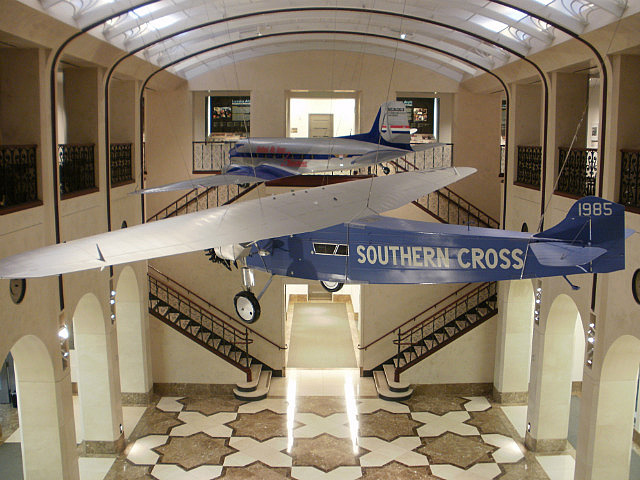 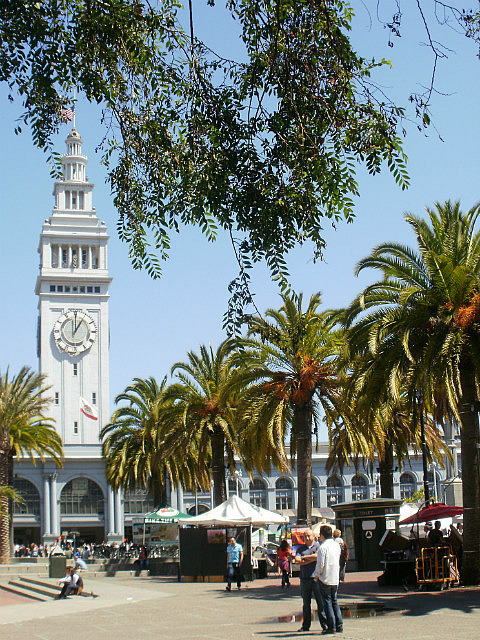 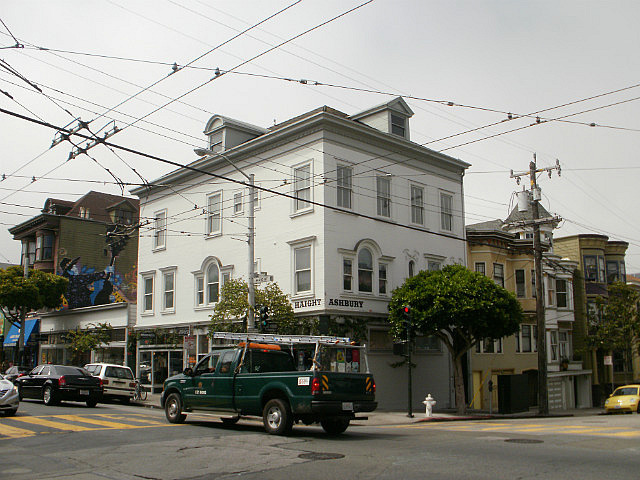 I bought a direct flight to Israel from NYC, but thanks to Irene, the plans got changed a bit. I was pretty exhausted from exertion (see a picture of my flooded basement) and lack of sleep, so every little thing that went wrong was a tad flustering. I took the bus to NYC and tried to take the train to Newark, but the train wasn't running, so I went back to the bus station and took a different bus that I had to wait in line for 45 minutes to get. I spent my bus ride calling companies to come clean up the flood mess in my basement. From NYC, I flew to Atlanta and from Atlanta to Amsterdam. Fortunately, the flights themselves were pretty uneventful and I was able to get some sleep. 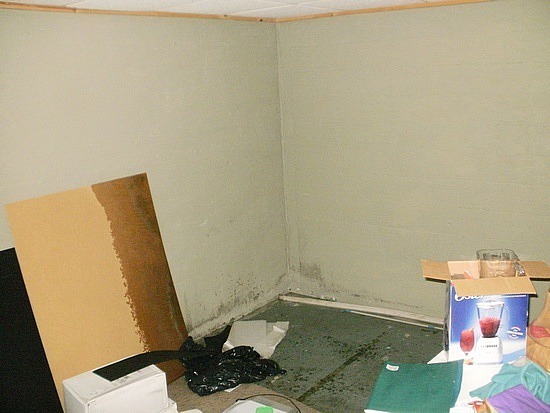 Due to excessive traffic, my time to transfer buses to get to the airport was reduced from 20 mins to -10 mins. To catch the next bus wasn't too long, but I'd end up pushing it at the airport. Not cool. Until, I got a call from Spirit that my flight had been delayed about 4.5 hours. I've never been called by an airline before, but thought that was really nice of them. Ultimately, that call saved me money as I took the slow bus to the airport, they fed me dinner, and even gave me a credit (without me having to ask for it. I was actually impressed with the way they handled things. Things actually turned out ok. Instead of having a stressful rush, I was already starting to decompress, relax, and get into my book. The original plan was to spend the night at Mike's in Miami, but since I wasn't getting to the airport until 4am, and he is dealing with finals, I figured that wasn't such a great idea. Instead, I slept on a bench in the airport for a while and then he and I went to breakfast at a more reasonable time. As I was going to sleep, I was thinking to myself "thank goodness I have the ability to sleep anywhen, anywhere, or I would not be so ok with this." I seriously dread the day that I lose my sleeping skills, because that would mean the end of my adventures. It was nice to catch up with my brother, but then it was time to be back at the airport for the rest of the trip- the Bahamas!

Upon arrival in the Bahamas, there was a live band playing in the airport. There was just something about the weather and the calm attitudes of everyone there that allowed me to begin decompressing almost instantly. Ilana and I got a taxi to downtown because there are no buses (oddly). It was pouring outside and there was dock traffic as everybody was there to see the new largest cruise ship. It took way too long to get downtown because we were stuck in traffic, but I didn't care. It didn't matter and I didn't even sit there and try to calculate anythign about the road efficiency in my head. We just chatted and chilled in the car.

We got to the Towne Hotel, where we were staying and got settled in. It was actually a pretty nice place, especially for what we paid. The walls were covered in Bahamian arts and crafts. While it might be considered gaudy or tacky by some, I thought it was more of a "character" adder. There was a macau in the lobby. While they had free internet, I really didn't feel the need to use it right away, as I was in relaxation mode.

The rain had just stopped, so we went foraging for food. There were folks using industrial brooms to sweep the water into drains all over the place so that it wouldn't puddle up and the floors/streets would dry faster. It also meant that they wouldn't be slippery sooner. What a neat job!

The food in my first Bahamian meal wasn't super Bahamian except for the Bahamian Goombay soda, which is really good. The restaurant was outdoors, which was nice. They were playing standard american pop music though, which disappointed me until I realized that they were only playing the good stuff and none of that kids pop and fake rock that the stations at home play.

The straw market happened to be right near where we ate. We walked through the straw market and admired the crafts. In some stands, the ladies were sitting there and making them as they waited for tourists to come through and buy. I asked one of the ladies where she learned it and she said that her mom taught her. I think it's a lot cooler when the people who are making it are selling it, as opposed to many places I've been where they have some room full of "artisans" making the stuff and completely separate people hawking the goods. There were a lot of little straw bags and baskets available, mostly with various Disney princesses or Dora the Explorer embroidered on them. Maybe that part wasn't completely authentic. Also, all of the stands had knock-off designer bags. If anybody ever wanted a "Coach" bag, this was the place to get it.

We wandered around town, doing a little shopping for souvenirs. We happened upon a mall that was decorated for Junkanoo. The Junkanoo stuff was really colorful and exciting. Eventually until we found ourselves near some of the tourist sights, so we wandered over to them. We walked around a little fort until we happened upon a tour group who was going into it. So, we followed them. We had a pretty nice view of the city and surrounding area. Right next to the fort was the Queen's stairs, another tourist attraction, so we climbed them.

We went back to town and got groceries. In the store, there were mostly standard foods that you could get at home (boxed mac & cheese, Lay's chips, Little Debbie treats). There were a few Jamaican spices, more beans, and some interesting jellies, but not anything crazy.

After our uber-Caribbean dinner of PBJ (and of course a nap), we wandered around the dock area. None of the night clubs were open yet, so we sat on the pier. In the night, we could see straight through the water to the bottom. There were a few neat big fish and a ton of tiny 2 inch long fish. All of the sudden, a whole school of the little fish would jump out of the water in unison. Then, silence. Several minutes later, this would repeat. We didn't plan on seeing the jumping fish, but they were actually really cool to witness.

We wandered over to the Hilton, which used to be a British Colonial building of some sort. Inside, there was a huge gingerbread village. This thing was super detailed and covered an area as big as several rooms. Some of it was even motorized. We didn't know it was going to be there, but since it was an we were, we spent some time admiring it. When the clubs opened, we headed over to da Balcony, which was playing some good music. We hung out on the balcony and watched the midnight traffic jam on the street below. I don't quite understand what the traffic jam was all about, but we thought it was funny.

Eventually, we found our way back to the hotel and drifted off to more sleep in the gorgeous weather. 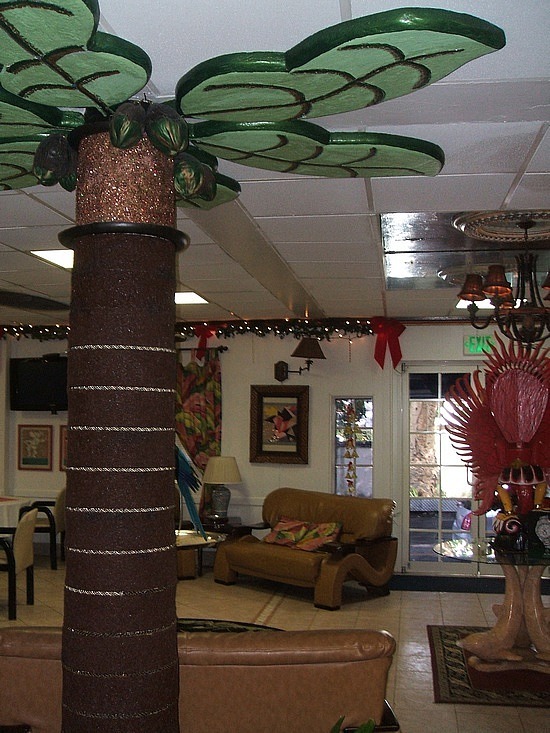 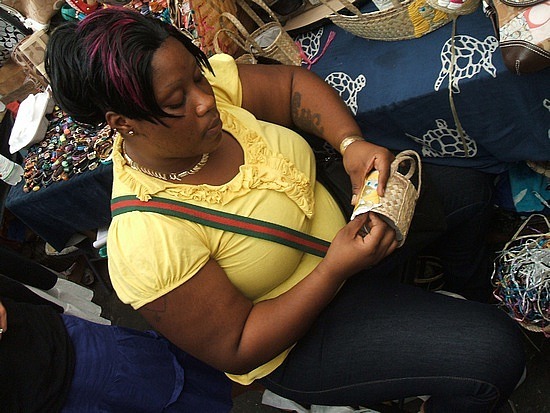 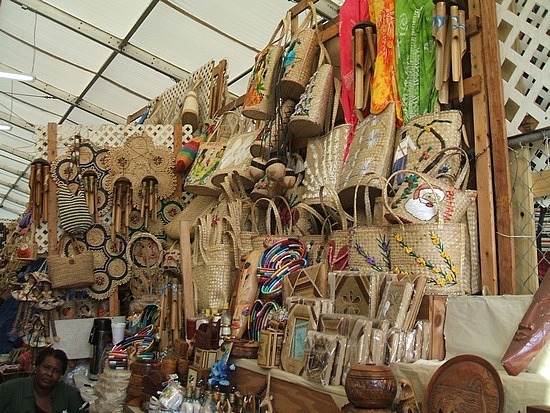 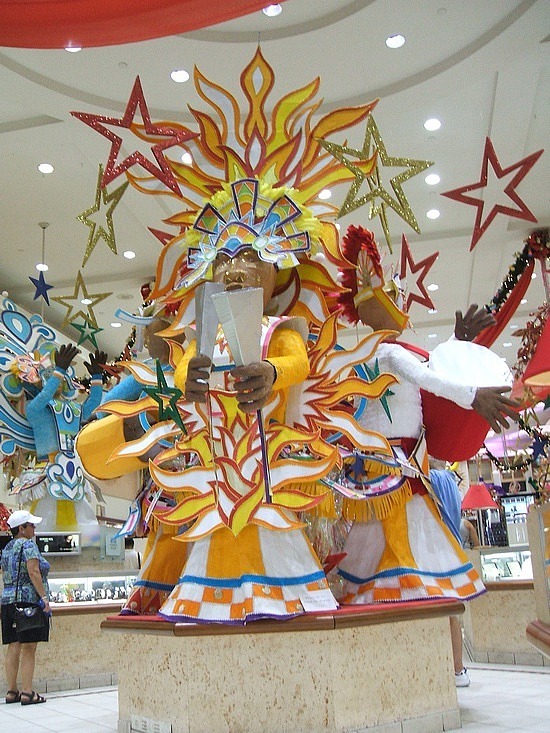 Junkanoo at the mall 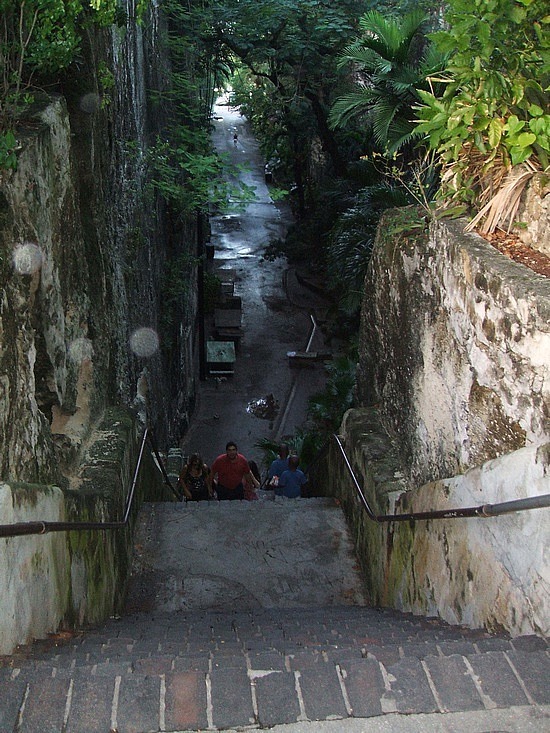 from the top of the queens stairs 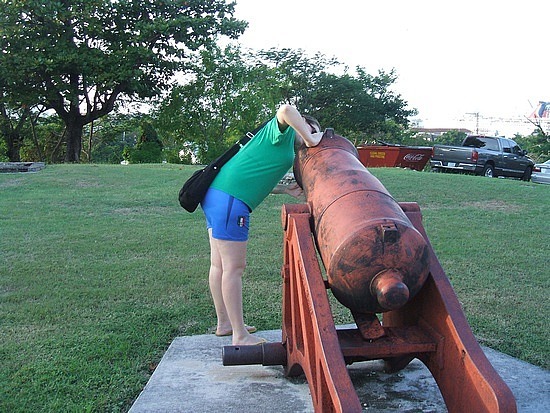 Looking in the cannon 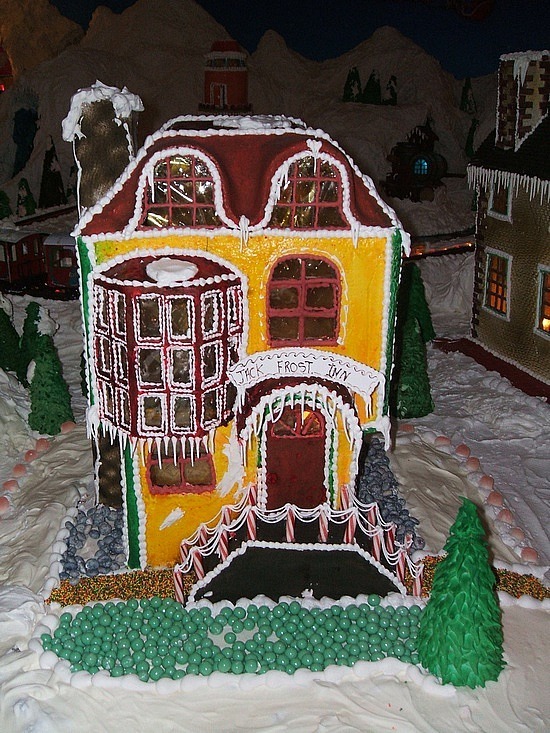