We got off the plane, paid our visa fee (really just an entrance fee) and were on our way downtown. It was actually quite easy to take the metro to the tram that dumps you right in the center of all of the major tourist sites. The only thing to note is that you need a seperate token for each, so get two. The tokens are only 1.75 lira, so it's not breaking the bank. Plus, the tokens are bright red plastic, so they're fun anyway. The ride was nice and took us through some neighborhoods. One area reminded me of the Soviet-style block apartments in Poland.

At the airport we had met another person with the same layover as us and was also on our train. Since I had Rick Steves and a map, I asked if she was interested in joining us (yay for me being social). We ended up walking around the park by Topkapi Palace together. We were actually trying to get into the palace, but apparently we didn't take the right entrance. We turned back. On our way out, we passed a science and math museum. Alexis, the girl who was walking with us, suggested we stop in, partly because it looked like it would interest us, but also because it was cold outside and looked warm inside. Mostly, the museum contained models of items. The place was somewhat interesting though. Just a hint- even though the perpetual motion machine looks like you're supposed to touch it- don't. Just by the gate to the park, we met a guy with a couple of rabbits and a chicken. We weren't quite sure if he was there to do magic tricks or what, so we asked. Turns out, he is a fortune teller. Alexis and I each paid him 5 lira, and he had the rabbit select a folded sheet from an array. That sheet contained the fortune. It was the same price as the museum, but it was also the same amount of fun. Her fortune said something about getting revenge, and mine about winning the lottery or some other prize. We wandered up a street that seemed to be filled with artists and even a free "art museum." Finally, we found the entrance to Topkapi palace. Phil and I decided to go in, but Alexis wanted to check some other stuff out. I was glad we went in. Even thought it was winter, the garden area was pretty and the buildings were really neat too.

Each section of the palace had been turned into a display. One room (supposedly) contained Moses's rod, King David's sword, Abraham's turban, and Mohammed's footprint. I can buy that the last one is legit, but I'm not sure exactly how they would have obtained Abraham's turban. Another room was filled with gems. There were swords with gens, jewelry with gems, and just general gems. Honestly, I think this collection puts up a fair fight in competition with the Smithsonian's gem display. My sister would have loved the display on various sultans' clothing. Really, what I was able to appreciate was that there was one jacket that had math written on the sleeve and that some of the outfits were so excessively big that I could probably have fit my whole body in just the sleeve. Personally, I was amused by the amazing ceilings and tilework. It must have taken forever and cost a fortune to complete. Also, in the king's room, there was a truly king-sized bed. This thing was bigger than my whole bedroom. The only part that I found a little odd was the sultan portrait room. The whole room was covered in single-up portraits of various sultans, but also family tree-style portraits of multiple sultans. My understanding of Islam is that thy can't have images of people or animals because they could be misconstrued as idols. Maybe the sultans were above the law or something- if somebody knows, please let me know. As we were walking through certain areas, there was a guy chanting the Koran, beautifully. Apparently, it is chanted 24 hours a day in shifts. The live incantation really added to the beauty of the museum area.

After the palace, we went foraging for lunch. I was a little disappointed that all of the restaurants that were playing music were playing American music, but we stopped at one anyway and hoped that we'd still get a good, Turkish meal. We did. I got a bunch of mezzes- dolmes that also had currants and pine nuts inside, some sort of rolled bureka, some caponata-like eggplant, and the waiter's favorite that can best be described as chili pate. I also asked for the "most Turkish" drink on the menu, which resulted in a small glass of Raki. If you don't want all of the rest of your food to taste like licorice, don't drink the Raki until the end of your meal. On the other hand, that might mean that you will be burping licorice flavor all afternoon. Even though the glass was very small and I had food in my stomache, I definitely a just a bit of a buzz going over to the Blue Mosque. The mosque itself is gorgeous. There are all sorts of intricate designs on the walls, ceilings, and windows. Afterwards, we picked up another Turkish drink (sahlep) from a street vendor. The drink is hot and tastes like milk with vanilla, cinnamon, and sugar, but had a gooey texture to it.

By the time we picked up the drink, we were getting to the point where we would have to head back to the airport to catch our flight to India- the real purpose of the trip. We were only able to make a quick stop inside the Hagia Sofia mausoleums. The whole area was set up like there were several mini-mosques connected with a large courtyard. It was neat to see how nice the insides were, because the Hagia Sofia itself seems pretty worn down from the outside.

The last item on the agenda was some souvenir shopping. We looked at some carpets that turned out to be way out of the range that Phil wanted to pay (we're talking thousands of dollars out), and a glasswork shop. I got a clock for my kitchen that was made in Turkey.

We caught the metro back to the airport. We were pretty exhausted and I definitely was wishing that Shanaenae was there, just so that I'd have somebody short to lean on (I know, that's bad). It was fortunate that I was able to pass out on the flight, because the next day started very early... 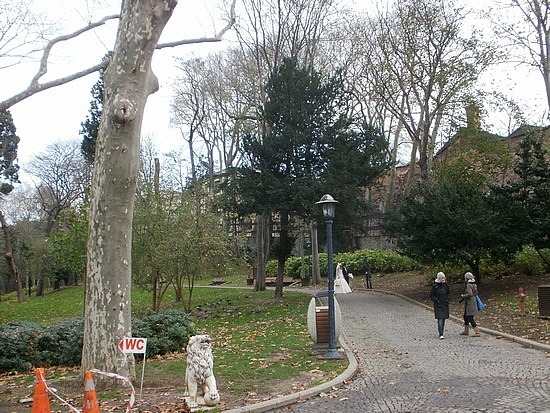 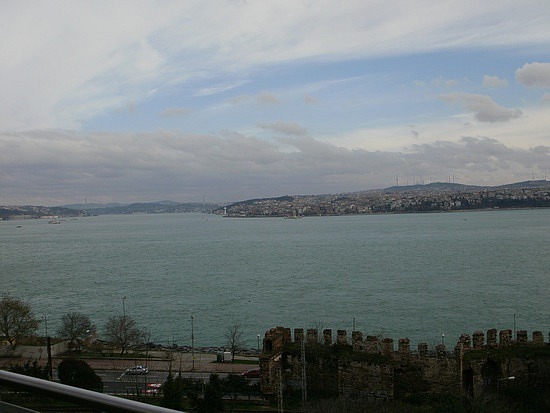 View of Asia from Europe 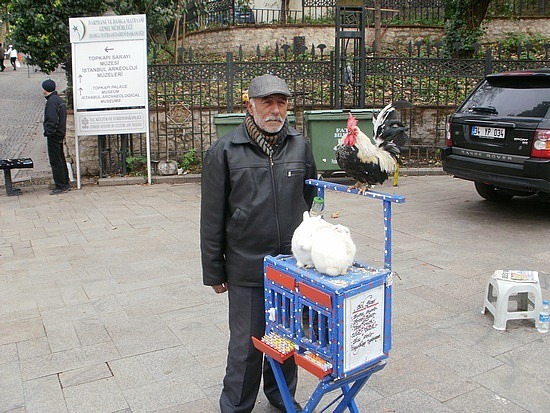 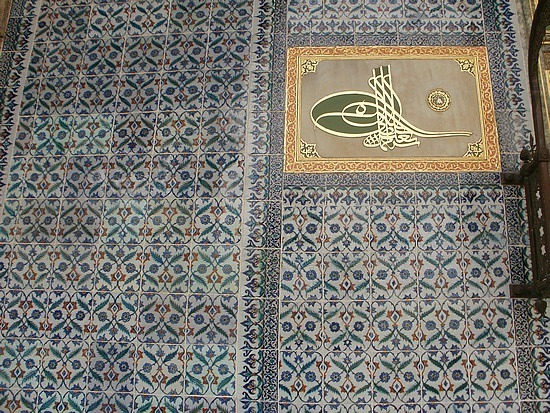 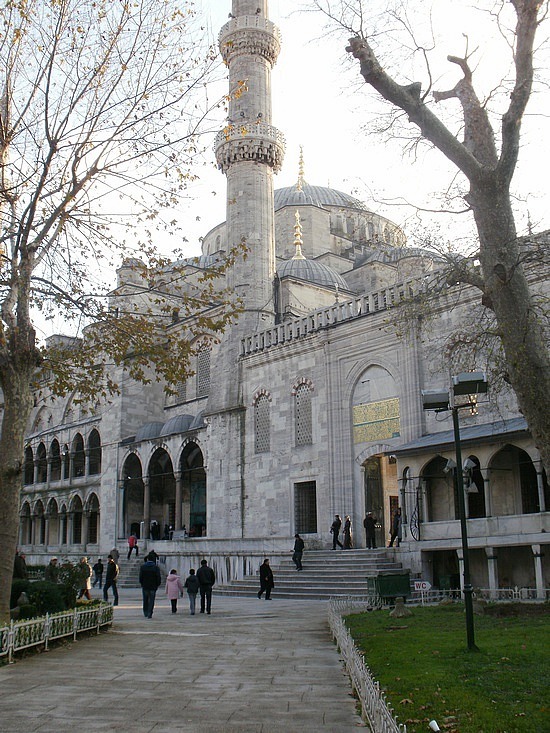 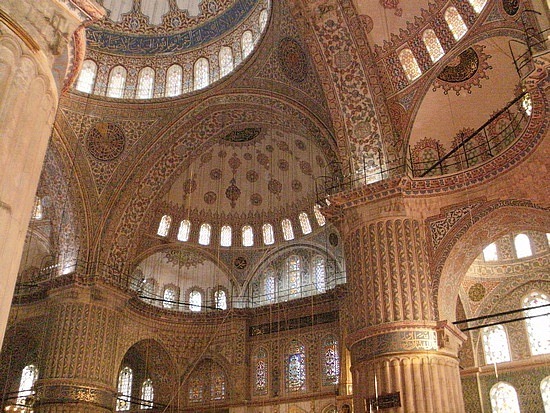 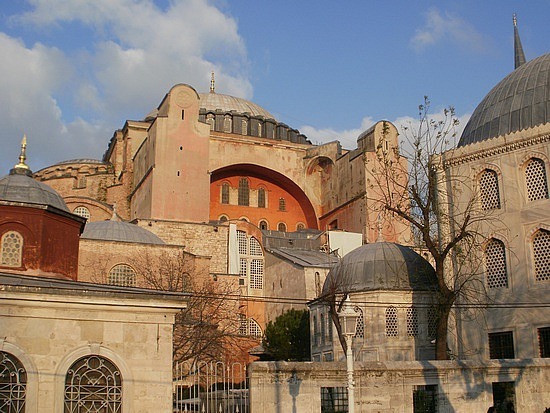 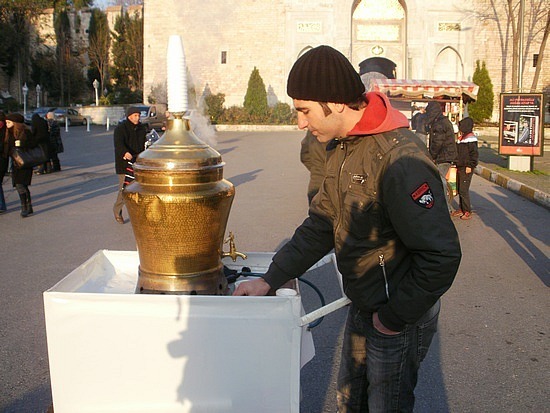