While I would have much rather been at my cousin's henna party, Amsterdam is what I got, so I was determined to make the best of it... The excitement started from the sky. As we were approaching Amsterdam, I noticed an interesting diamond of dots in the ocean. As we got closer, I noticed that they were windmills. I find the concept of offshore wind farms pretty exciting. From the sky, the Amsterdam area appeared quite different than most cities. As the plane went inland and closer to the airport, the area was mostly green, with some watery areas lined with tight clumps of houses with burnt-sienna colored roofs. It was as if the city area was clustered around all of the waterways, and anything not touching the water was a farm. As a result, the area seemed to be more mixed-use than most areas. The first question that popped into my mind though, was "how do they do that?" I was very curious to know if they had water and somehow built houses on it, or if the waterways were man-made. (I found the answer on the canal tour later in the day.) Even the airport in Amsterdam was neat. The airport has some nice amenities. There is a free art museum (with about 9 paintings, but hey, it's something), a nice lounge area with very comfy couches and “fireplace,” and even a shower area. The amenity that got me excited was the luggage locker area. I love being able to drop my stuff off and not have to haul it around the city. Before I left the airport, I wanted to make sure that I was checked in to the next flight segment, as they couldn't check me into the flight in NYC. The one drawback to Schipol airport is the transfer service. I wasn't able to just print a boarding pass and go. I had to get some ticket from a machine, wait in line, get a number for another line, and check in with some other person. In the end, I walked away with a boarding pass, but it took about 30 minutes longer than it should have and cut into my time to see the city. Because I was short on time, I took the fast train to the center of Amsterdam. It cost a little extra, but not that much, and it took less than 10 minutes to get downtown. In my case, it was probably worth it. If you're a budget traveler and not in a rush, the "slow train" is probably a better deal, and it's not that much longer.

As I hadn't planned on being in Amsterdam, my pre-trip research consisted of asking 3 people “What should I see?” The unanimous verdict was “the red light district.” So, I grabbed a map at a cute litle map machine at the train station, and just headed in that general direction. the machine prints free maps of the area, and prints right on the map a black line showing you how to get to whatever ourist location you enter on the computer screen. The red light district is basically just across a canal from the train station, so the line was almost non-existent and the area was extremely convenient to get to. The first street I walked down had 2 McDonalds and 1 KFC restaurant, which did not excite me. This was not what I came to see. It did, however, have a fast food place where the burgers were in little vending machine slots, so you didn't even have to wait in line for them, and the line was only for the fries. Because I was told that the fries in Amsterdam were fabulous, I got a tray. Honestly, I was happy that they were very potato-ey and soft, but they didn't taste that different from other fries or that fabulous. Mayo is better than ketchup on fries, in my opinion, so maybe that's where the reputation comes from- the sauce. Otherwise, I can't see why the fries are so highly rated.

I wandered around the area, admiring all of the neat architecture, bridges, and canals. It did seem that pretty much everybody was smoking, which meant that the air wasn't that great, but that was about the only damper on the day as the weather was gorgeous- perfect for the shorts and t-shirt I was wearing. I was lucky about that, as I hadn't even had time to check on the weather before I left home.

Overall, the red light district had three main types of "entertainment"- gambling, weed, and raunch. I didn't really see any working girls themselves, but I was also there in the middle of the day. What I did see was a large quantity of porn stores; stores with "upscale" adult toys; stores hawking sexual-shaped egg molds, pasta, and mugs; and several Chinese massage parlors. Unlike in other areas, the R-rated material wasn't hidden in some curtained-off area, there were images right in the windows for anybody passing by on the street to see. Additionally, all of the souvenir shops contained t-shirts that were pretty raunchy, and mostly unfunny, although a few were at least clver. To give an example of the type of shirts there ere... one I saw in several shops was of a not-fully-dressed lady asking Pinocchio to tell her lies. In addition to the raunchy souvenirs, every shop had weed souvenirs. In addition, there were plenty of stores selling cannabis lollypops, "special" cookies, and marijuana seeds. There were a ton of coffee shops that I'm not sure even sold coffee, and then there were stores that didn't even try to pretend, they just said "headshop" on the sign. (For those looking for other kinds of souvenirs, there were plenty of stores with tulip, cow, and cheese-themed trinkets, but not as many as with the raunchy trinkets.) In the middle of all of this "XXX entertainment" there was a very gorgeous Buddhist temple. The temple seemed to be in the "Chinatown" area of the red light district, which makes sense as it is a Chinese Buddhist temple. The temple itself is small, but very ornately decorated. There is one very large big Buddha in the center, and there are several smaller Buddhas in glass cases areound the sides. For a small donation, I was able to pic out a "fortune paper" that gave me advice like a fortune cookie would.

After visiting the temple, I walked around areas of town that weren't completely filled with smoke. There are actually quite a few great cheese shops around the main tourist area. I tasted sampleed of absolutely delicious gouda, and in one shop got to see each of the steps to make the cheese. The Reypenaer store had delicious big chunks of fancy cheese that I would have loved to have picked up to bring back to the US. However, as I wasn't going straight back, I restrained myself.

A waffle completed my food tour of Amsterdam. Again, I was told they were fabulous. While it was good (and covered with strawberry icing as the guy at the waffle place said that was his personal favorite), it reminded me of a stickless waffle from the waffle-on-a-stick place in the mall in Columbus, OH, and didn't live up to its reputation.

Now that I had done all of the things I had been told I should do and would have time to do, I just wandered around. I ended up seeing some palace, plazas, a church that looked old and important, a very fancy (from the outside) mall, and a quiet residential area that was devoid of crowds.

Eventually, after hours of walking, I decided I needed to sit, and that a canal tour boat was probably the best place to sit as I would still be able to see the city. The boat tour probably would have been a good way to start off the day as it gave me a better idea of the city layout, what was in the city, and where all of the museums were. Also, it was warmer in the morning. By the time I was on the boat, it was cooler, plus there was wind due to the motion of the boat. I put on my sweatshirt and was fine, but recommend doing things in the other order. The tour guide explained to us that there are over 100 canals and 1000 bridges in Amsterdam. He pointed out all of the museums and other sights, including the leaning houses. Apparently, the ground is very soft due to all of the water. In order to build the houses right up on the canals, the people fill in the mud with wood piles, and build the houses on the wood piles. However, the houses still end up sinking sometimes, which means that they start to lean. It's neat to see from the canal, but must suck for the homeowner.

After the canal tour, I had to get back to the airport to make sure I caught my flight. As a result, I ended up eating the Chinese food at the airport for dinner, which I don't recommend as it was so salty it would have been inedible if it weren't so expensive and me so cheap. Fortunately, the flight to Tel Aviv had a vegetarian pasta option for the main course that was pretty decent. However, the salad that came with the vegetarian meal was topped with a shrimp, so pretty much nobody ate it. (What genius came up with that idea?) I was able to sleep for most of the flight after the meal, which felt great after a long day of walking. 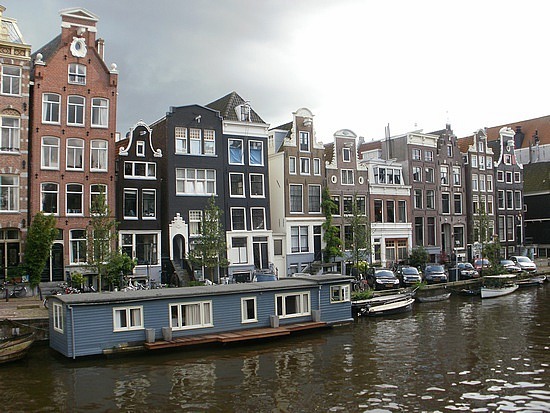 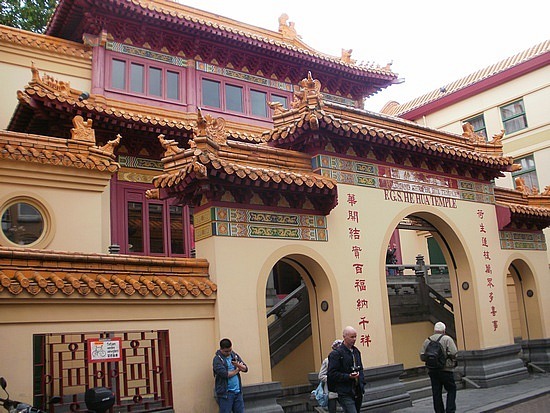 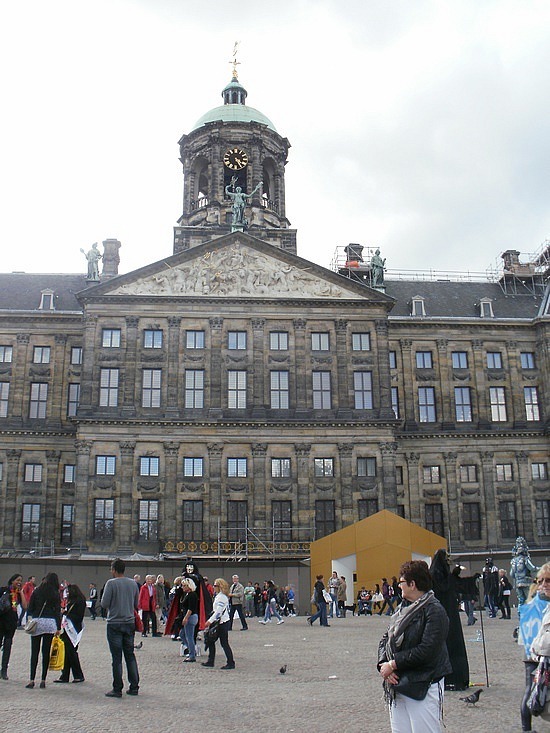 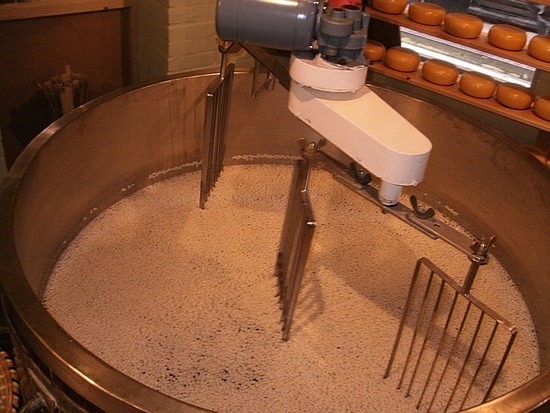 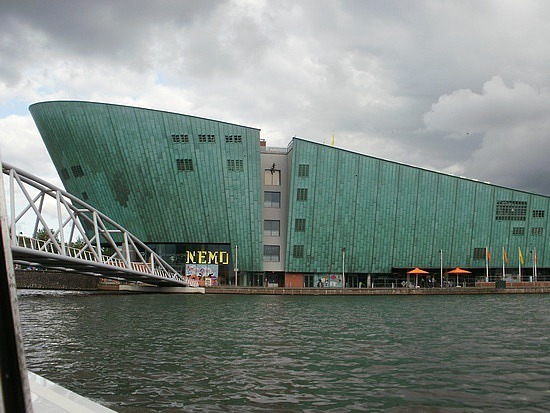 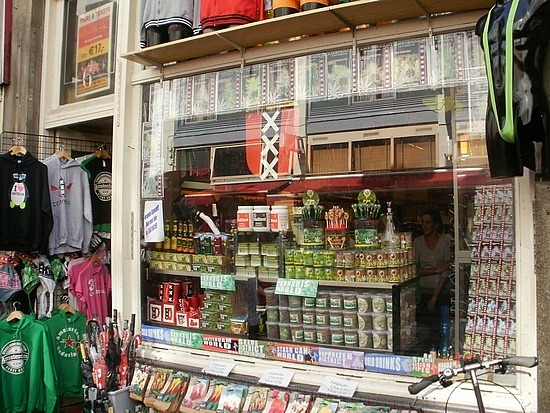 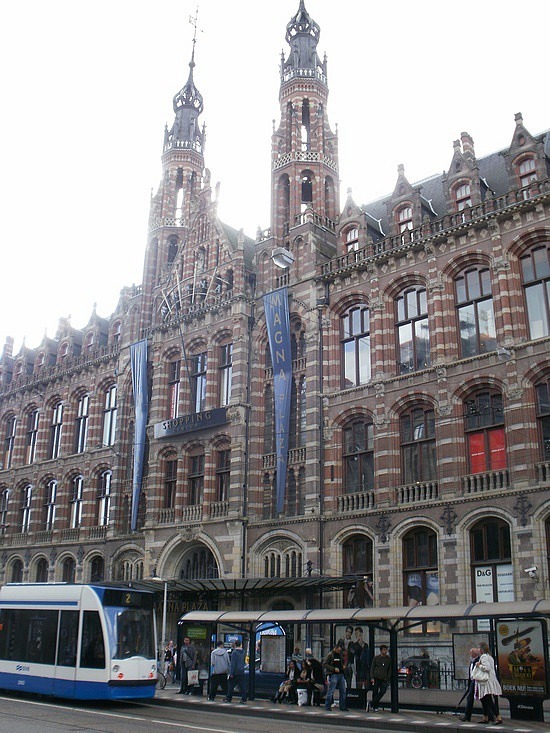