I landed in St. Kitts for the first time today. Getting off of the plane, I had a gorgeous view of the ocean and the mountains. The weather was pretty nice too. It was a tad overcast, but it was still clear, and the temperature was tropical. It was too hot for what I had made the journey in, so I changed (as planned) in the restroom. Warning- there is only a single stall in the ladies room on that side of customs, so there was a line. There was also a long line to get through passport control. The officers weren't rushing and there weren't enough of them to expeditiously take care of the 2 planes that landed at the same time. It was a great introduction to “Island Time.” It was also a great introduction to the heat as it was very icky in the waiting area when you didn't happen to be standing right in front of the fan. Overall, the airport was reasonable for a small airport. When I got through, a guy from work met me and brought me to my hotel, the Sugar Bay Club. Wow. This place is non-ostentatiously beautiful. The room reminds me of the studio apartment I had in college, but better. It has a nice seating area for meals, another for chatting and watching tv, a bed area, and even a stocked kitchenette. The freezer already had ice in the trays, the fridge had baking soda in it, and the kitchen cabinets were full of dishes and cooking tools. The d&eacute;cor of the whole place was pretty tropical, with brightly colored linens and furniture that reminds me of the beach. The best part though, is the balcony. Mine overlooks the pool, some mountains, and palm trees. The mountains here really do remind me of the Pirates of the Caribbean movies. It is obvious that the place isn't new, but that doesn't really bother me. After unpacking, I was taken to dinner by the plant manager. We went to the Marriott nearby and grabbed a bite at a little cafe they have. I was actually impressed with the vegetarian chili. It had just enough spice to make you know it was there, but not so much you couldn't eat it. It was very vegetabley, but also had plenty of beans and was served with rice and pita. It was so filling that I was full before it was finished, and am still full a couple of hours later.It has only been half a day, but so far, it's nice being in St. Kitts. I feel like I got a good start on the trip. 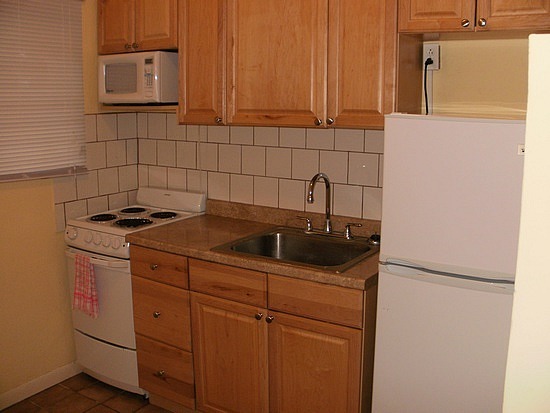 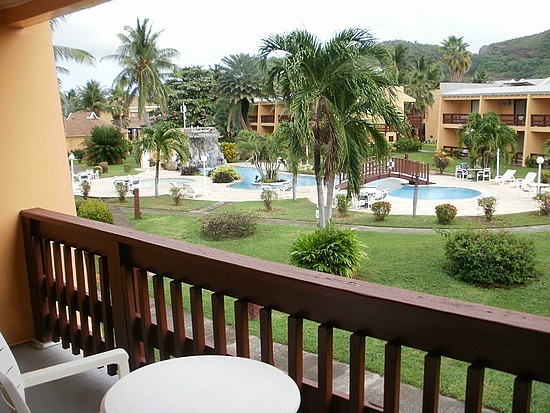 View from my deck