When I first got here, one of my goals was to try every restaurant on St. Kitts. I've made some progress there.

Waterfalls at OTI is elegant, and I was pretty impressed with the food. The view is pretty great too.

There aren't a lot of places open for lunch on Saturdays, but the Marriott has Cafe Calypso. The food was pretty good, although the place was air conditioned so it was actually a bit chilly.

One Friday, we got off work early and I got to eat lunch at Waterfalls inside Ocean Terrace Inn (in Basseterre). The food there was also very good. The scenery is great- they have a little garden and you can get a seat that overlooks the water.

On Sunday evening, there aren't a lot of places open, but Rock Lobster in Frigate Bay is. The food was good, but what was exciting was that they have a lot of Mediterranean choices. I really don't know where else on the island you can get mezzes, real olives, or some of the other choices they had. I will definitely be going back there. I'm actually at the point where I can't decide if my favorite restaurant on the island is Rock Lobster or Ciao.

Right between Rock Lobster and Ciao is a little art studio that I had never been to before Les Maines D'or. They use local clay to make all sorts of neat pottery, have some cool paintings/drawings, and had some very unique jewelry. Since I was told that the pottery pieces are dishwasher and microwave safe, I actually picked up some.

This past Sunday, I was looking to try someplace new for dinner. The French restaurant has always intrigued me, and their sign was lit up. There were some lights on inside, but it didn't really look like the dining room. There was another guy also who saw the same thing as I did- their hours sign said they should be open, but they looked pretty closed. It's a little frustrating as I don't know if that means they're permanently shut or just that day. Places here keep such bizarre hours and you never know how long they'll stay open as a business. For example, Calabash, which I really enjoyed in December, was closed shortly after and replaced with Taste Kittitian (not as good). Bangkok in Frigate Bay closed (Twist in Port Zante is still open as far as I can tell) and there is something new going in there. Right next to the Marriott, ther was some open beach where we moved the water aerobics class the other week when the waves were high in Timothy Beach, and now there is a beach Bar, Karma there. Things here seem to go up and down pretty quickly.

I actually ended up at La Cucina in the Marriott. They let me in, even though I was wearing shorts, but made sure to tell me that this isn't a shorts restaurant. True, it was nicer. The food was elegant, but pretty bland. I suppose if you're into very light flavors, this would be for you. It wasn't bad, just I like bolder flavors and more seasoning. Plus, it wasn't cheap. I'm going to say that if you're in the mood for Italian in Frigate Bay, Ciao (if it's open) is a better choice financially and taste-wise.

Yesterday (Firday night) was a bit on the awesome side. December is Carnival time in St. Kitts. There are events all month long. I heard that some of my co-workers go every night. I'm not doing that, but last night, we went to a "launch party." The day after Christmas is jouvert morning (pronounced "joo-vay"), which is a morning full of fun and parades and dancing, I'm told. I expect that it's similar to what I went to in Cayon in May, but scaled up. To "lead" the parades, I guess, there are jouvert troups. Each troop has a big party where people can go to see costumes and sign up to be in the troop. The goal of the evening was to get signed up for a troop (and of course, enjoy the parties.) We started at Fat Tuesday in Port Zante, which is known for its alcoholic slushee drinks. From there, we headed up to Cloud 9 (which is right up the stairs) and partied there for a while, but as it was still early, it was pretty empty, especially compared to what I'm used to. Next ,we headed up to 17 degrees, which is an outdoor venue. It was early, so that was pretty empty, but they did have a stationary party bus with a DJ playing pretty good music from the top of the bus. This is where the jouvert launch party was supposed to be. After a while, we headed to KFC for some snacks and then back to 17 degrees. There were a lot of people there by the time we re-arrived and that party was definitely going on. However, there were a lot of kids, so my friends and I decided to go over toe Potential, a bar by Independence Square. The party at Potential was great for the first few minutes we were there. There are 2 major bands in St. Kitts- Sugar Band and Grandmasters (Nu Vybes). Personally, I prefer the Grandmasters live and Sugar Band's recordings. Grandmasters were at Potential, and I think that's what made the party fun. However, they finished at midnight, which is very early for St. Kitts and just after when we got there, so a lot of people left at that point, and the party kind of dwindled. We headed back to Fat Tuesday, then Cloud 9 again, and I was wondering what kind of bizarre bar crawl we were on- it seemed like we were going everywhere twice (except the strip). Finally, we ended back at the launch party. They were out of sign up papers, so we didn't get to sign up for the troop, but they told us where in town to go to sign up later. They did have a "costume launch" where they had a bunch of girls walk down a catwalk and show off the "costumes." They consisted of boy-short undies and a t-shirt, which most of the girls had town in various fashions to make unique. They were also wearing light-up horns as the theme was "Red Devils." At this point, the party really took off, and we were even caught behind a mosh-pit at one point. Honestly, just being with my friends at a big party where everybody is in a good mood was fabulous. As an added bonus, we weren't all sweaty and gross as it was pretty cold outside (which in St. Kitts means 75 degrees F). If you are ever here and have an opportunity to attend something like this, I highly recommend it.

I slept away the morning because I had partied into today. When I did wake, I went into town to sign up for the jouvert troop, but the place said that they hadn't yet received the papers. I grabbed a bite at the American Bakery on Fort Street. Last night, we passed it a bunch of times and it always smelled soooo good, so I thought I'd check it out. The food was decent, but it smelled a lot better. I also grabbed some ice cream at Scoops in Port Zante, which was good ice cream, but I have to admit, I had higher hopes since it was advertised as homemade.

I took a drive up the peninsula, just to enjoy the weather. 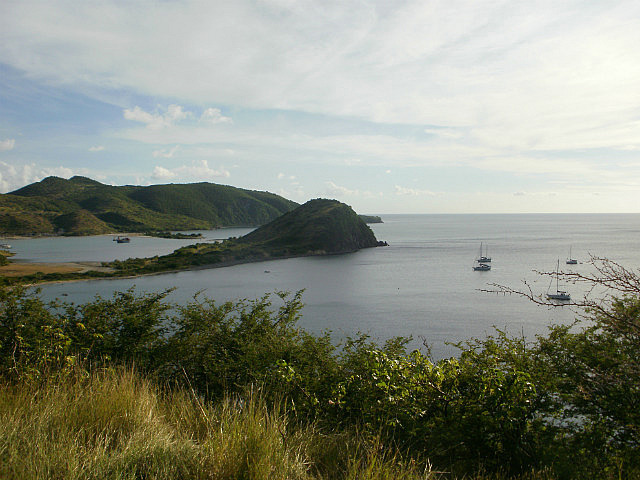 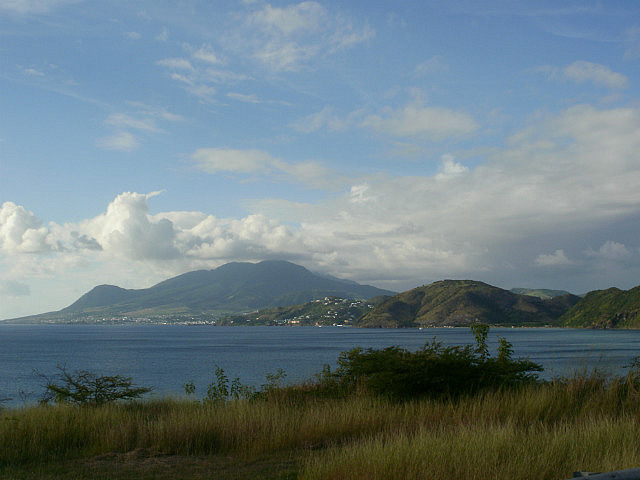 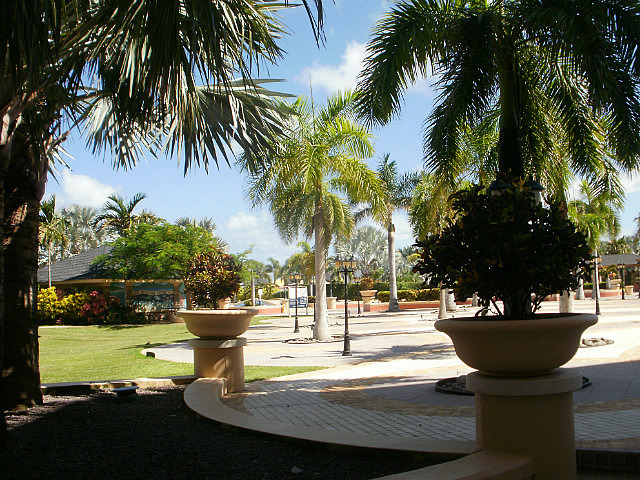 in back of the Marriott