Yet again, I find myself in Paris for a short trip.
Like other times, we had breakfast in a little cafe that opened up onto the street.

All of the last times I was in Paris, I missed out on the D'Orsay Museum. This time, I got a chance to walk around it and check out the art. I used the Rick Steves audio tour and got a good feel for the different types of artwork contained in the museum. My favorite was a Henri Edmond Cross painting that caught my eye before I realized it was him. I guess I must really like his style, as my favorite from the Thyssen-Bornemisza in Madrid is also by him (I even have a poster of it on my wall at home.) The museum had plenty of more famous artists' work, like Cezanne, Van Gogh, Gaugin, Seurat... 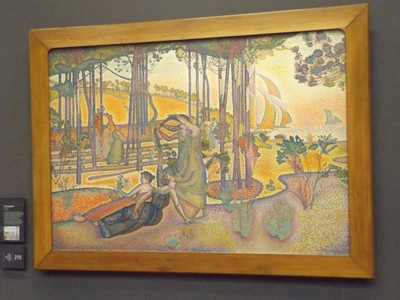 The building itself is pretty cool too. It used to be a train station, and it still reminds one of a train station due to the spacious, open middle passage that runs straight through the museum. 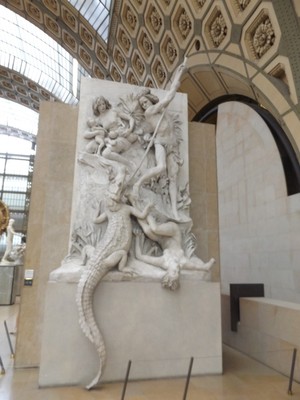 Another important sight that I hadn't gotten a chance to see was the Palace of Versailles. It's a short ride out of Paris, so we got on a bus tour that took us there. The tour came with a guide who showed us around some of the rooms of the palace and explained the kind of life that the royals lived. I found it interesting that there was a ceremony for everything in the royals' lives. The king would ceremoniously go to bed in certain chambers, but then could go through hidden doors to private chambers. Then, when he woke up, he could scurry back in time for him to ceremoniously wake up. When the queen gave birth, apparently there was a whole crowd in the room waiting for the young (hopefully) heir. I can't imagine giving birth with dozens of people crowded into the room watching. 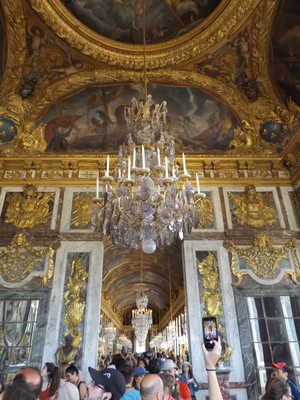 The rooms are pretty typical palace rooms for the most part. They are covered in artwork that must have taken lots of artists lots of time to paint and install. The main exception is a room that is covered in mirrors. Apparently, at the time the room was built, mirrors were extremely expensive. So for a king to basically wallpaper a room in them was a clear sign that he was showing off his wealth.

After the palace tour, we walked a bit around the gardens. The flowers and topiaries were beautiful. And the gardens were pretty expansive. We only saw a small portion of them before we had to get back to the tour bus and return to Paris. 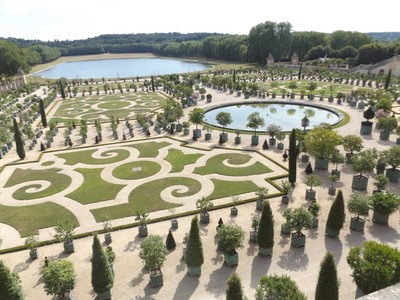 Saturday morning, my sister and I started the day with a walk to a local street market. We were hunting for food for a picnic later in the day. Just next to the market, we saw a cheese shop. We love cheese! We bought some cheese using my typical method- asking the store clerk what their favorites were. The top favorite was Comte, so we got some of that as well as a few others.
We then went to the outdoor part of the market. We picked up some delicious berries. (The blueberries were so good that they didn't quite make it all the way to the picnic.) And of course, we picked up some more cheese. At this other cheese stand, the lady's favorite was also Comte, but a slightly different one. We got it as well. 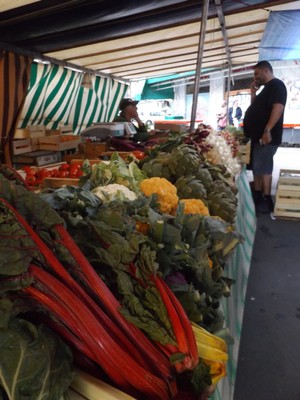 After dropping the food off at the hotel, we took a cab up to Sacre Coeur. Other than Sagrada Familia (which is in a class of its own), this is my favorite cathedral/church stained glass in the world. I've seen it before, but am happy to see it again. This time, when I was inside, there were other people inside (last time it was super-early in the morning and the church was empty). I got a chance to hear a choir sing, which made the experience extra special. 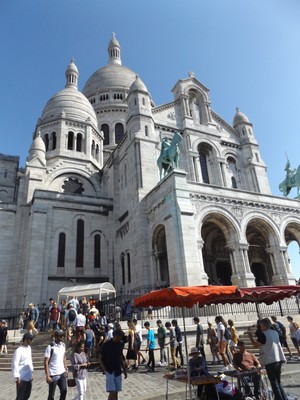 Just outside the church, we caught sight of a kiddie-style train. We hopped on and enjoyed the ride as the train took us all around Montmarte. The audio told us about the various sights that we passed by, like the Moulin Rouge. For anyone who wants to see the area, but doesn't want to walk a lot of hills, it's a great choice. 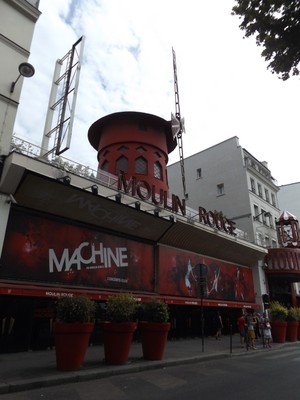 We caught lunch just down the hill from Sacre Coeur and a cute little restaurant that only probably seated 20 people. My buratta was delicious and creamy on the inside, and my friend was super-happy with his pork chop with some kind of fruit pickles.

But really, lunch was the appetizer. After walking the rest of the way down the big hill that Sacre Coeur sits on and taking the metro back to the hotel, we picked up all of the picnic food we had gathered in the morning and headed to the Luxembourg Gardens. We ate our picnic on a park bench, watching the people pass by. We moved a bit to a different park bench and watched the kids playing with boats in the pond. Even when it started to drizzle a bit, some people covered up or went under trees, but mostly people stayed outside. 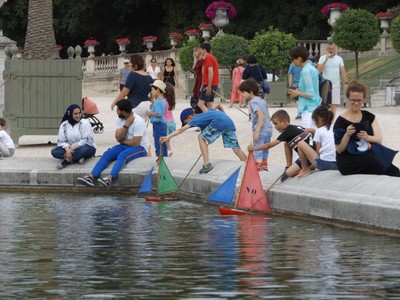 When we were finished in the park, we headed back to the hotel to rest up. Everyone else was staying longer, but I had to catch my flight back. I actually had some trouble as the metro station I needed to change at was undergoing construction. First, I tried to follow the signs to the entrance, but it didn't lead anywhere. Then, I asked someone, who directed me to a secret elevator that didn't have signage except when you were right there. But I couldn't get a metro ticket at the entrance with the elevator because there were no working machines. I had to find a different exit to get a ticket from. But I couldn't get out to the ticket area without having a ticket. I wasn't the only one with this problem, so there was a whole line of people waiting to tailgate out of there. Eventually, I was able to get a ticket, come back in, and then catch the train to the airport. But it was certainly a complicated adventure to do so.