The breakfast at the hotel was exactly the same as it was yesterday, which is ok because there is so much variety. Shortly afterwards, our guide met us in the hotel lobby. We had booked the guide through a private company, because we wanted a tour of areas that aren't usually on standard Olso tours. The first place we headed was the Kongsberg Silver Mines. The road there was a little over an hour, but it was all gorgeous. The area is covered in pine forest and it is hilly, making for great scenery. We passed only one city, and the rest of the way was just forested mountainland. We arrived at the SIlver MInes a few minutes before the mine train left. We saw the display center (English translations available) and learned a bit about the mining operations before we got on the train. One note- mines are like caves in that they will be cold, even if it's not cold outside. I was chilly, but ok in my jeans and long-sleeve shirt, but most people would probably be most comfortable in at least a sweatshirt. Even the guide was wearing a coat. The train took us through a mine shaft for several minutes with nothing really to see. I had expected little lights so that we could see a bit of the shaft on the way down, but it was pitch black outside the car. (Inside the car they had a little light so we weren't completely in darkness.) When the train stopped, we got off in an area that was used as bunkers in WW2. The government stored the archives, including the constitution, and a whole bunch of art here so that it wouldn't be destroyed in the war. Next, we went on a tour of the mines. The guide showed us them while explaining the history of the mines and what the lives of the miners would be like. The silver was originally discovered by two farmer's children who saw something shiny and brought it home. The father got arrested when trying to sell it because everybody thought he must have stolen it. He explained where it came from, and the king came to set up a mine. For a long time the mines financed the country. Miners were always needed, so they were given great benefits. Of course, there were hazards of the trade, such as black lung, stone lung, and pneumonia. However, they had free medical care. Also, they got pensions that were transferable to wives and jobs to kids. However, the wages got to be too high in the 1950s, and the price of silver dropped. It was no longer economical to pay people to mine, so they stopped the mining. We were able to see 2 different styles of mining- one where they cracked the rock with fire and makes sideways tunnels, and one where they blasted through the rock with dynamite and made vertical tunnels. We were also able to see the ladders and elevators they would have used to get down to work. The elevator was working and the guide demonstrated it. It reminded me of a Super Mario move, the way she had to jump back and forth in order to get up and down the "elevator." Above ground, we actually got so participate in some mining. The tour guides have a tunnel that they are demonstrating the method of cracking the rock with fire. The rock that came out is so brittle, you can break it with your bare hands. They also had a large rock that you could hammer away at and keep chunks of. Some of the chunks even contained tiny garnets.

On the drive to the next place, we saw all sorts of beautiful lakes, bucolic farms, verdant forests, and adorable villages. In one, we stopped to see the stave church. This is a traditional wooden church built in a style borrowed from the Russians.

Towards the end, we passed through an area with wooded gorges and an incredibly scenic lake. There were several waterfalls. Really, the scenery was just stunning and there's no way that pictures can capture the beauty. Finally, we reached Rjukan. They have a little bus that takes you from the parking lot to the building, but we hiked because there was no bus schedule, and the hike was very nice as well. The plant itself looks like an old castle or palace building more than a factory. Inside, they have displays and a video about the Norwegian resistance to Nazi Germany and also about some industrial topics. The story behind the importance of Rjukan is that in WW2, heavy water was one of the keys to atomic research. One of the only heavy water plants in the world was in Rjukan, Norway. So, the Germans increased the production of the plant in order to supply their researchers with the tools for atomic research. The allies carried out a failed attempt to sabotage the plant. Then, they carried out some more successful raids and air bomb attacks to shut down production. Finally, when the Germans were transporting what they had produced (since production was down from the other attacks), some people set bombs on the ferry that carried the heavy water barrels and sunk them. Of course, the plant at Rjukan was also very important to the local economy. It was originally a hydroelectric power plant. Some of the turbines and machinery is still in there and available to be seen and touched. Additionally, there was some information on the lives of factory and industrial workers, both historic and more modern. Completely unrelated to why we were there, but equally cool, in my opinion, on the way down the hill from the site, our guide saw some edible berries called rips that we got to taste, straight from the bush. They kind of tasted and looked like pomegranate seeds.

On another foodie note, we had dinner at a fast-food bakery place at the mall across from the hotel. I thought I was getting a Greek-style spinach and feta "calzone," but instead it ended up being more like a spicy saag paneer hot pocket. Very delicious! 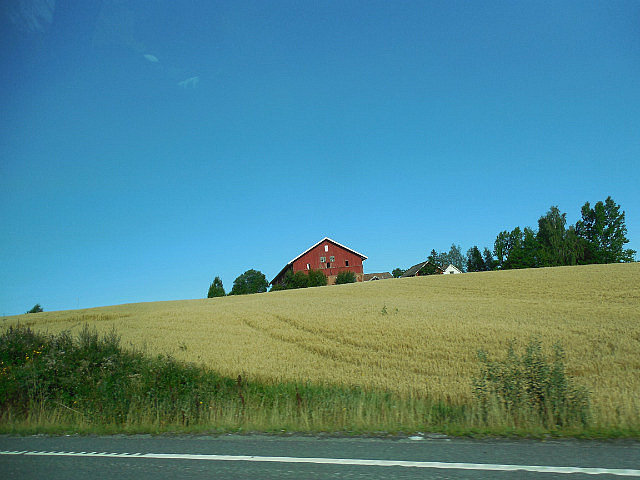 Pastoral scene between Oslo and Kongsberg 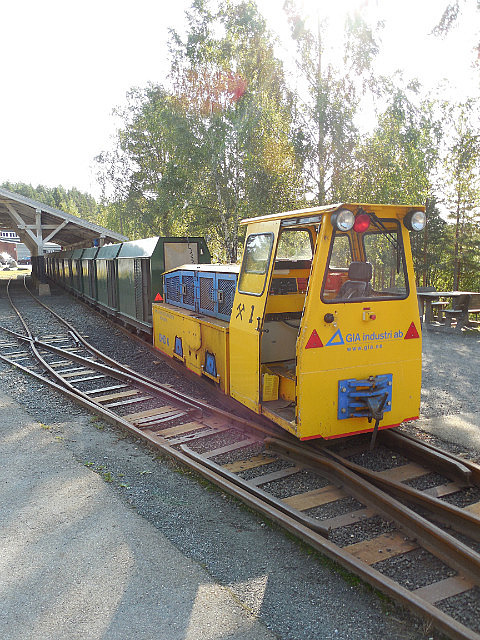 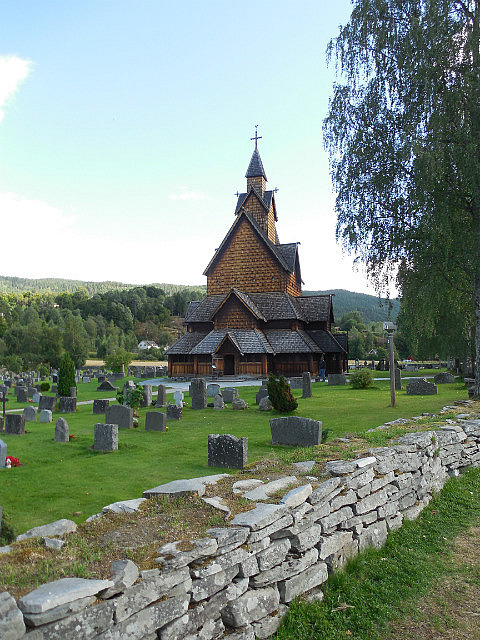 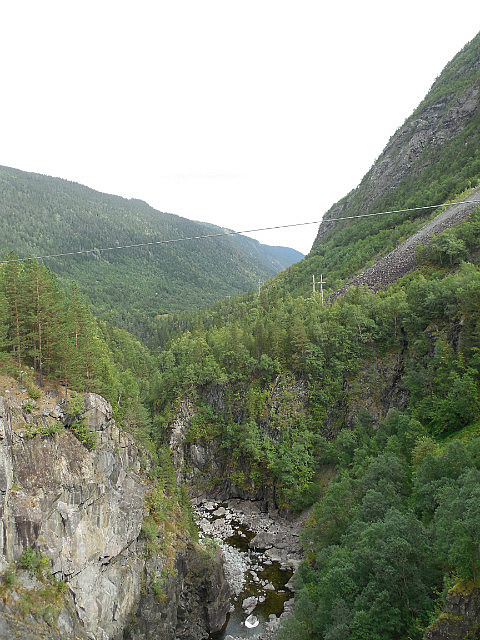 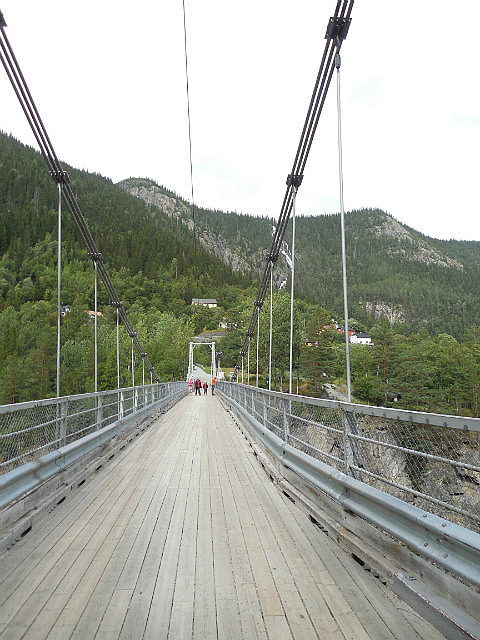 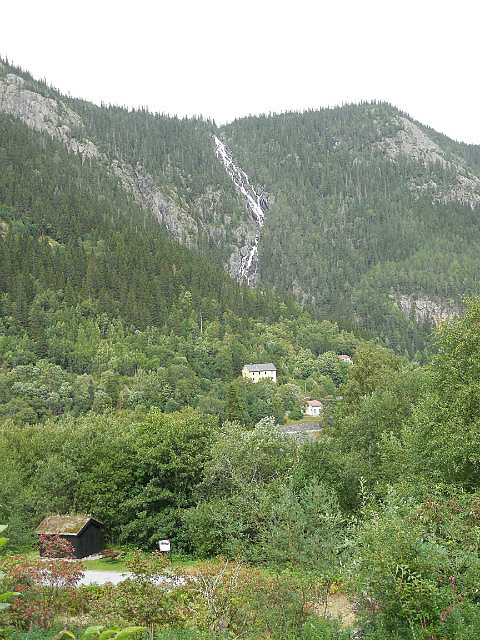 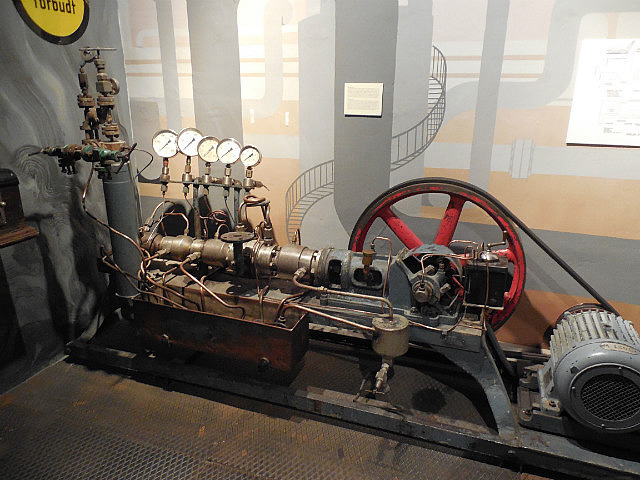