This morning, I foraged for breakfast and ended up getting it from the same fabulous bakery as yesterday. As usual, I asked the person behind the counter what his/her favorite was and then ordered that. That meant that I ended up with a rhubarb pastry 2 days in a row, but I can see why it is the favorite of 2 different people. Since everybody here keeps talking about the brown bread, I also got a brown bread covered in pumpkin seeds (fabulous), brown bread with chocolate (interesting, but I probably wouldn't get it again), and brown bread chips (salty and good). After breakfast, we went to Town Hall to meet our bus for the bus tour. We got seats on the top (better view) and the left side. While we didn't get good views of some of the stuff in town or the water, we did get good views of all of the houses and buildings the guide pointed out to us on the way to the first castle. Also, the bus windows were sparkling clean, so pictures through the window turned out well. I was very pleased with the company for that. I was also very pleased with the guide. The guide was excellent and had amazing energy. In town, he told us about all of the things we were passing and knew tons of interesting facts. For example, there is a law in Copenhagen to preserve the skyline that doesn't allow buildings to be more than 5 stories tall. However, the Radisson Blu got special permission to be taller. Throughout the whole drive, he never seemed to stop. He had all sorts of things to say about Danish history, culture, sport, architecture, and lifestyle. It was fascinating! He pointed out the thatched roof houses (yes, people have modern houses with thatched roofs). He pointed out a Danish cemetery, which actually looks more like a shrubbery maze. He pointed out that all of the Danes who went to Tour de France lost their titles due to doping. (I promise this was relevant to what was out the bus window at the time.) He had a lot of insight and I learned a whole lot just on the bus ride.

We got to our first stop, Kornborg Castle, which is the castle from Hamlet. (He kept pronouncing it like Cornwall- I was so confused.) Again, he was great at explaining life in the castle. He pointed out where the grain would be and why they would turn it (to keep it from burning). He also pointed out that they used the grain to make beer because the boiling and the alcohol killed all the dangerous germs in the water. While the beer was super-light, it kept people alive in a way that water wouldn't. He had great stories about why the display table was set with lemons (expensive, to show off), how they would use the table cloth to wipe their hands, and how their knives were not only for eating, but for showing off wealth. He had stories about the great ballroom and how Shakespeare's players visited it, and reported back very accurately. (Of course, they didn't report everything accurately- they thought that Helsingor was the capital of Denmark because it was a big nearby city, but it wasn't.) One thing he kept pointing out is what in the building was original, restored, accurate, and incomplete. This is because the castle (like pretty much everything in Denmark, I'm learning) burned down. It was restored, although there are still original pieces. One of the people important in the history of the castle is Christian the 4th, king of Denmark. Apparently, he started his reign with full coffers. During his reign, he sponsored the arts, architecture, women, and other expensive things. At the end, the monarchy was close to broke. However, his legacy lives on through vast public works, such as the restoration of the castle. You can tell which other ones he sponsored because the all have his symbol (a 4 inside a C) all over them. He's worse than the graffiti artists who want their name everywhere. We skipped a lot of the castle in order to see the dungeons instead as we didn't have infinite time. The pre-dungeons were actually very nice and well-lit by the natural light. They contained a statue that would supposedly come to life and protect Denmark if it ever was in trouble. The actual dungeons though, were very dark. They were dimly lit with candles, but I agree with the guy I overheard who pointed out that this would never exist in the US because people would sue. It was dark, easy to get lost, and a touch slippery in places. Of course, that's how dungeons are supposed to be. The next stop on the tour was Fredensborg Palace, the Queen's summer residence. Of course, since she's living there (in theory) we only got to see the outside, and not the inside.

The last stop started with lunch. We were pretty starving, so instead of waiting in the long line with the rest of the bus, we ventured into the town a bit and found a nice cafe to eat lunch at. We were a bit rushed, but the food was good and we got to sit down. Frederiksborg castle, like the others, burned and was restored. Also, at various points it was sacked but the Swedes, so many of the items that were originally there are in Sweden currently, or were stolen and melted down. We started in the church, which was amazing. Unlike other Protestant churches of the time that were built as stark as possible so you could only think of God, this one was where the Danish kings were crowned, so it was gilded up the wazoo. Everything is covered in paintings, gold, ivory, or other decorations. To show off, the king purchased what was (at the time) the world's largest portable organ. It was so large, you couldn't move it. Also, this is where the shield awards are kept. Apparently there is a Danish Order of the Elephant where the Queen can give out special awards (or maybe knighthood?) to people who do special things. All of the shields are located in this church and they are quite a sight to see. Next, we headed to the palace itself. The palace was a "show off palace" where the king could bring guests to impress them with his wealth. The whole thing was decorated with tapestries, leather wall paper, fancy carvings, and paintings. Here, we got a great look at the opulence of the time. Again, the guide had a bunch of interesting stories. When in the king's bedchambers, he pointed out that the bed was short because it was fashionable to sleep sitting up in those days. It was believed that if you slept laying down, evil mares might come in the night, sit on your chest, and smother you to death (night mares). He explained that there were people paid to be "bedders." They just sat in the bed all day and kept it warm until the king needed it. He also explained why the spice chest was in the kings' bedchambers- spices were worth their weight in gold, so he needed to keep tight control of them. On the way back from the castle, we took the highway, which wasn't as scenic as the coastal road we took out. However, everybody was tired, so it wasn't a big deal. The guide didn't say much on the way back either, but he did come around to see if anybody had any questions about anything on the tour. He was a great guide, and it was a great tour.

Upon arrival back in Copenhagen, we decided to go see the Little Mermaid, Kastellet, and Gefion Fountain. Since it wasn't close and I had woken up with sore feet, we decided to take the S train, even though it was only 2 stops. What a pain! First, the machine wouldn't take bills, so we had to go get coins. Then, it didn't want our coins. Since we were struggling, we decided to let somebody else go in front of us before we used a credit card. Lucky for us, the machine gave her credit card problems and so we learned not to use it. We tried to pay, but it wouldn't let us, so we just got on the train. Fortunately, the machine on the way back let us pay properly. I have to admit that I'm a little disappointed at how unsigned the tourist attractions are. There are no signs telling you where things are, even when you're right on top of them and everybody wants to see them. You just have to know where these things are by following the crowds. We did find the Little Mermaid and the fountain though, as well as several other interesting statues worth going to see. The fountain was very impressive. Legend has it that Denmark and Sweden were split from each other by a lady (maybe a godess) driving oxen down the middle. This scene is captured in the fountain. Next, were determined to have pizza for dinner since it was Friday. The Italian restaurant in one of the hotels near us had pizza, pasta, and salads. None of it was impressive, but it was all ok. 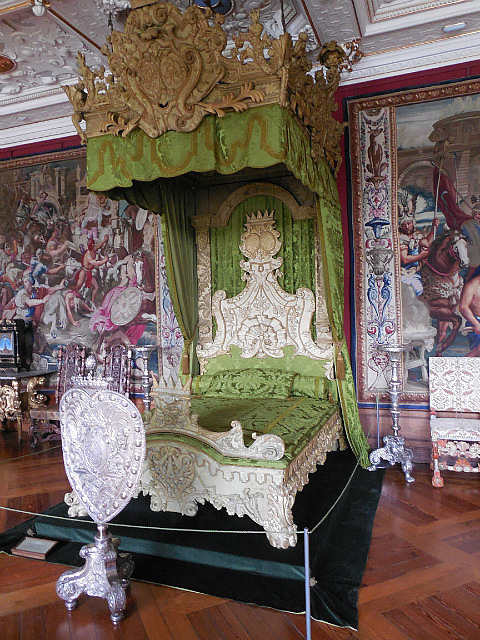 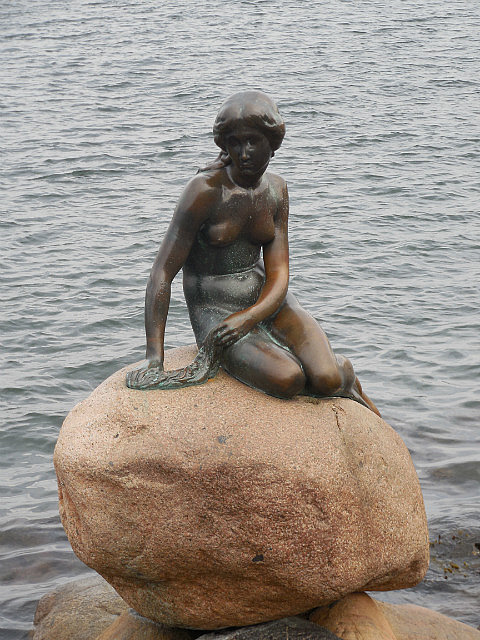 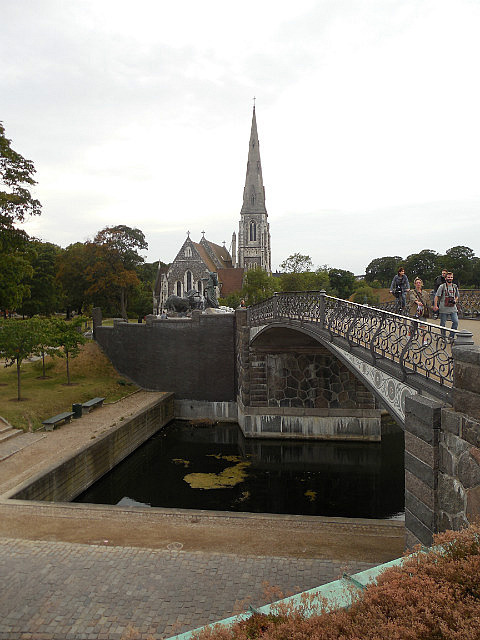 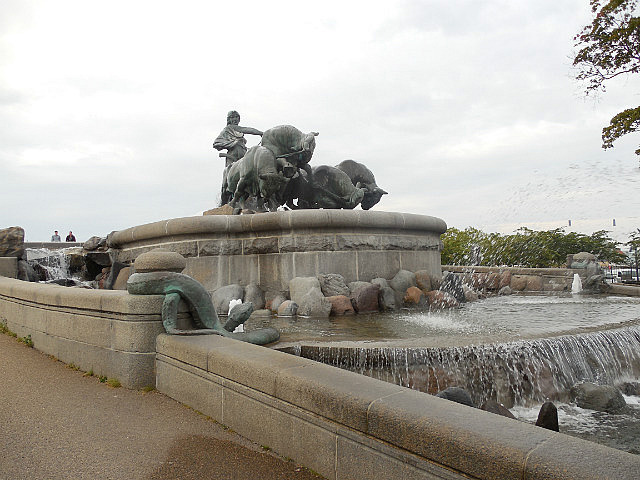 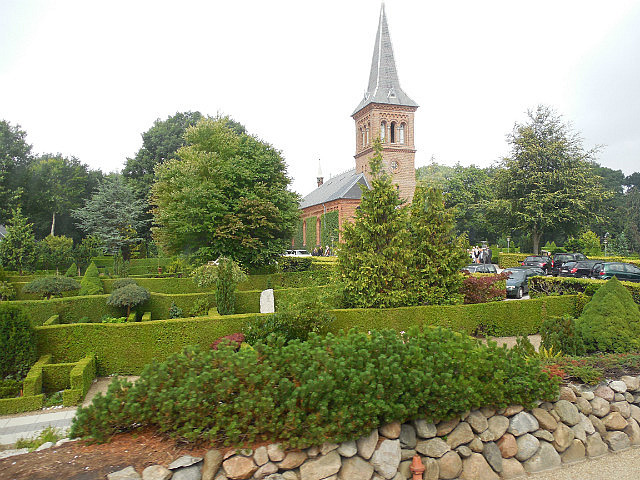 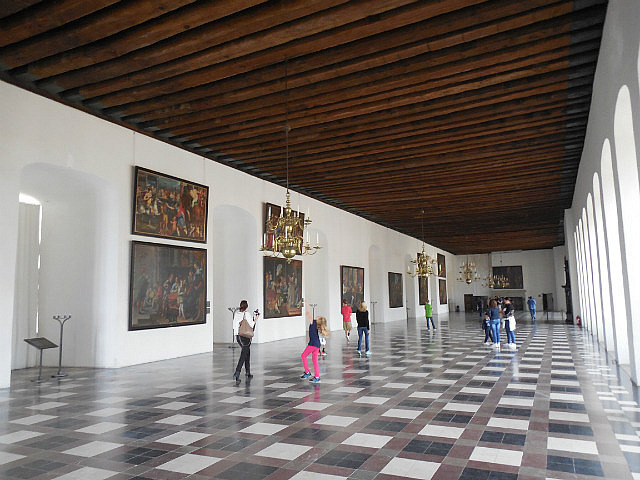 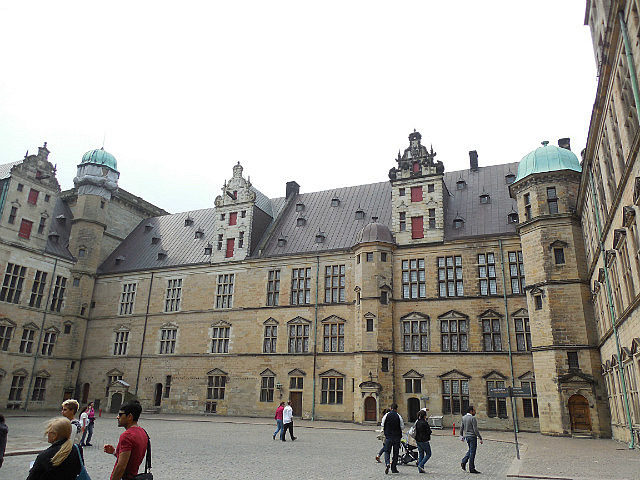 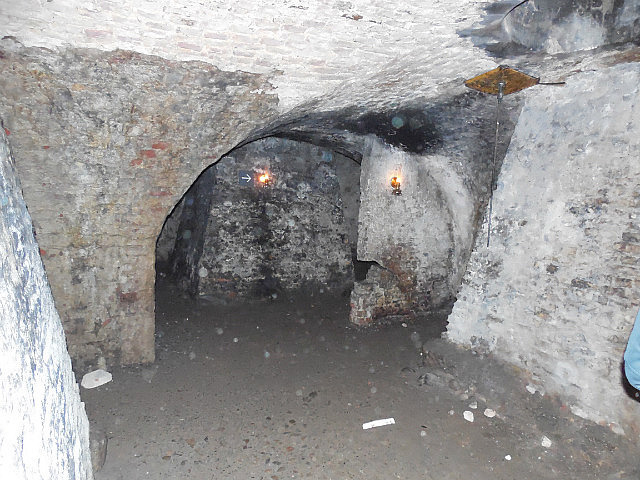 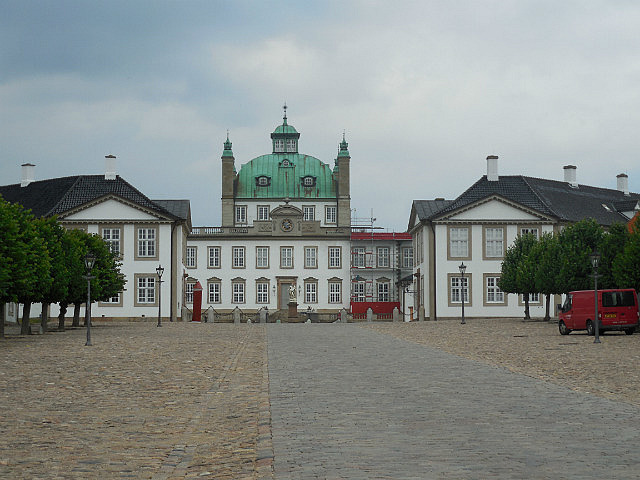 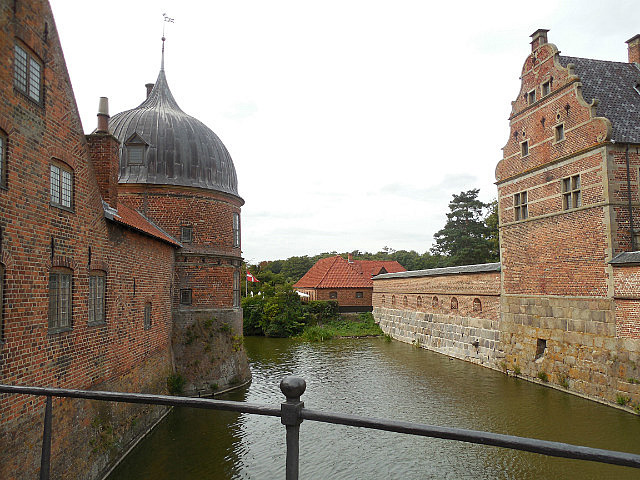 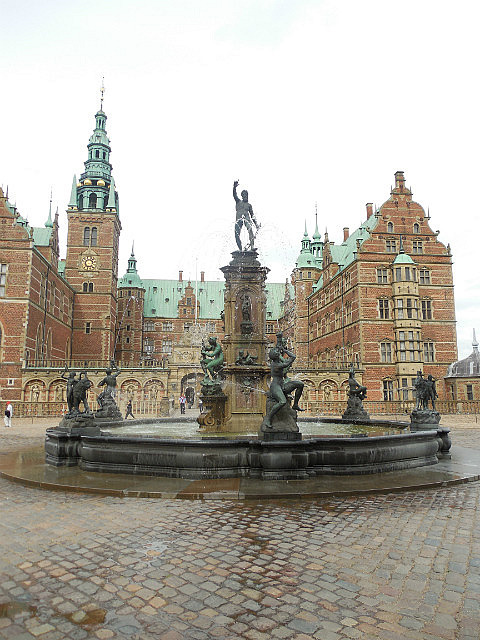 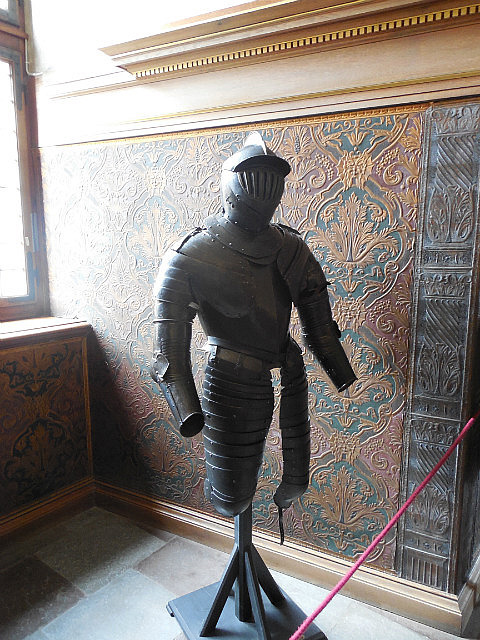 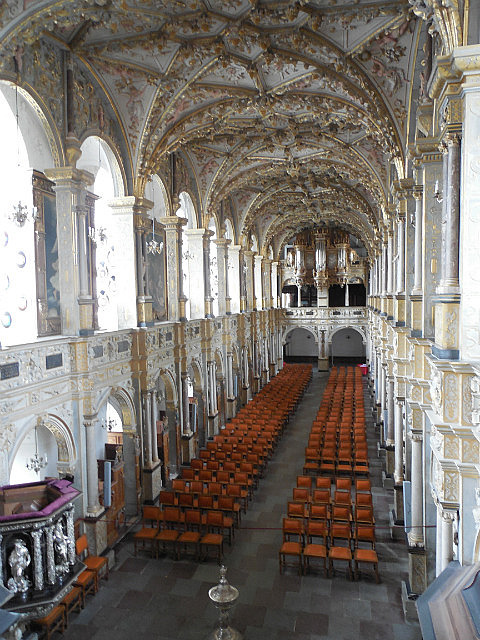 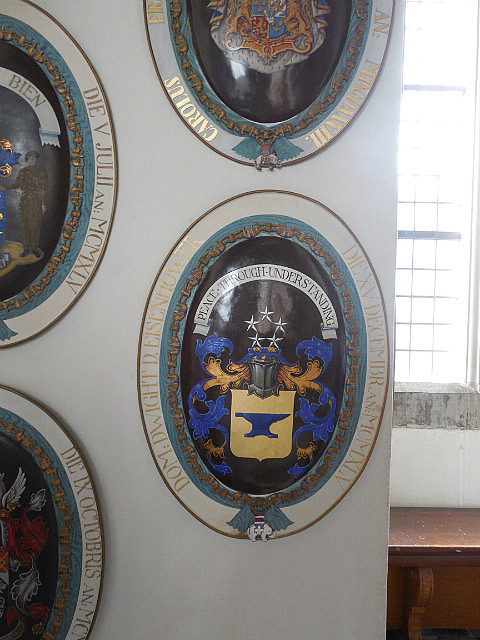 Eisenhower's Order of the Elephant Shield 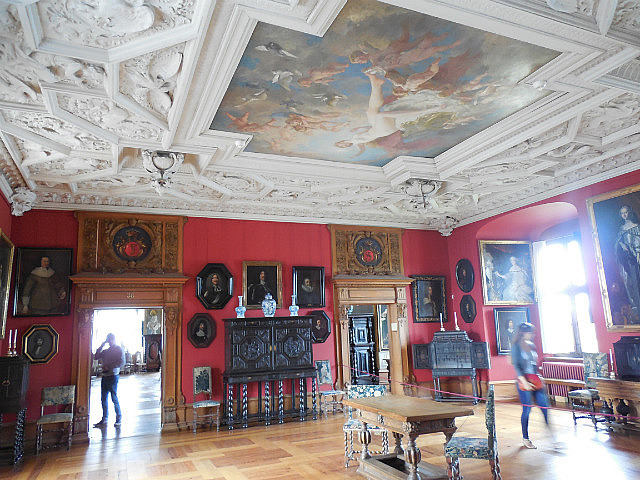