I got up, had pre-breakfast out of my packed food, checked out, and stored my luggage at the front desk. I grabbed a bus ($2) to Simpson Bay where I was picking up a ferry to St. Barth. I had forgotten about morning traffic and it took longer than expected, but wasn't ridiculous. There are probably ferries from P-burg, but I didn't know of any and AquaMania's The Edge came recommended and I could book online. The sign was pretty hidden, so it was a good thing I had a local who was helping me to make sure I got off the bus at the right place and got directed to the pier, which is behind some hotel. From Simpson Bay, the ride to St. Barth was pretty bumpy. I can see why each seat comes with a plastic bag. Nobody on the boat seemed to have problems though. For whatever it's worth, I was the only under-30 on the boat. There were 2 couples I'd put in their early 40s, but everybody else was retiree-aged. On the way out, I got a view of St. Maarten that I can imaging being Frigate Bay in 20 years. We then passed a bunch of other islands before landing in St. Barth. Upon landing, we went through the cutest little immigration booth. There was no paperwork, but they did stamp my passport. I hadn't really planned anything ahead, but right at the entry port there is a tour desk that will book you for various tours. I got a ticket to ride the Yellow "Submarine" later and then checked out town while I waited. The town area is very shopping-oriented. There are a lot of upscale stores. If you want to buy a Louis Vuitton hammock, this is the place. However, for those of us who aren't so into overpaying for everyday items, there wasn't much. I grabbed real breakfast at a little French cafe. The tomato pesto quiche was really good. It didn't particularly remind me of the eggy-gross that passes for a quiche in the states. I also had a cupcake that I was impressed with. It wasn't so sweet, but the icing made up for it. At 11, I caught the Yellow Submarine. It's not really a submarine, but more of a glass-sided boat where the sides are under water. It was better than a glass-bottomed boat in that we were lower and the fish were all around us. However, diving in the middle of a school is way cooler than being on a boat in the middle of a school of fish. On the other hand, we had somebody who was identifying the fish for us, which is hard to do while diving. Also, we got to go to more sites than we would have on a standard dive. I think that even if you're a diver, the Yellow Submarine experience is still worth it. The first site we stopped at, we saw a shipwreck with a ton of fish around it. We saw several sharks, which were very cool. The second site consisted of some light coral on the volcanic rocks. The rocky bottom was pretty different than what I'm used to. There wasn't a whole lot of coral though. However, again the guide was telling us the names of all of it, which nobody on a dive has ever been able to do. It was neat to finally put a name to all of the stuff I've seen. The last site was out in the sandy area where there was some seaweed. We were looking for turtles and we weren't disappointed. We probably saw a dozen or so. At one point, we saw an eagle ray, which is apparently so rare that the guide who does this for a living only sees them 3 times per year. I guess I brought some luck because this is the second time this week I've seen some. (The first being my Sunday dive in St. Kitts.) After the boat, I went walking around town again, this time to the museum. On that side of the bay, there are fewer shops. Also, there are fewer big-name expensive brands and more local artsy-type of shops. I looked in the a bit on my way to the museum. However, everything closes for the afternoon nap, so by the time I got to the museum I would have been kicked out shortly. I decided to grab lunch in the meantime. In addition to being short on shops, that end of town is short on restaurants compared to the other side. What did exist was crazy expensive and didn't look too interesting. I finally settled on Bagatelle, which is halfway back around. I was pretty happy with the truffle and cheese pasta, although the bill was very high. For some perspective, a glass of Sprite was 4 euro (they didn't have tap water as a choice). My lunch ended up being more than I'm paying for a hotel room some nights of this trip. It still wasn't time for the museum to reopen, so I decided to hike to the fort I had read about. The fort by the museum is apparently the wrong one. You can hike to it, but since it is in use, you can't get in past the police guards. So, I read a bit and napped on a park bench by the museum for a few minutes until it reopened.

The museum is 2 euro and not worth that much. The displays are pretty sparse. Most of the museum is words in French, although each panel has at least one picture. The guy handed me an English translation booklet, but if I wanted to read about the island, I know how to use a library. There were only a few artifacts and not nearly enough pictures. If you're into models, there are 4 models in the museum (1 boat and 3 buildings) that you might like. Beyond that, there's a video of still photographs of views of the island, but you could just go view them yourself. I was pretty unimpressed and can't recommend this museum, even given that there isn't too much else to do for the non-shopper. Next, I headed to the correct fort, which is on the other side of the bay. The hike is pretty short, and it's easy to find because there's a lighthouse sticking out the middle and you follow the road almost all the way to the fort. There were 2 cannons and some ruins with no signage. The view was great and worth the short hike. By the time I made it back down, it was about time for the ferry to return to St. Maarten. The ride back is much less choppy as we're going with the wind instead of against it, which also makes it shorter. It was nice timing, because even with the afternoon traffic, I had plenty of time to get back to the hotel, grab my bags, repack for the flights, get a taxi to the airport, check in, and then just sit at the airport. Liat- Leaves Island Any Time. At least they had some nice steel pan musak playing in the waiting area.

The flight to Dominica was short. The drive to the hotel was long. It was an hour and a half, which surprised me as the island isn't huge. However, we were going max 40km/hr as the roads are extremely windy and challenging. The taxi took other people to town as well, and each of us paid $40US/$100EC. It was late and I was tired, so I went straight to bed. 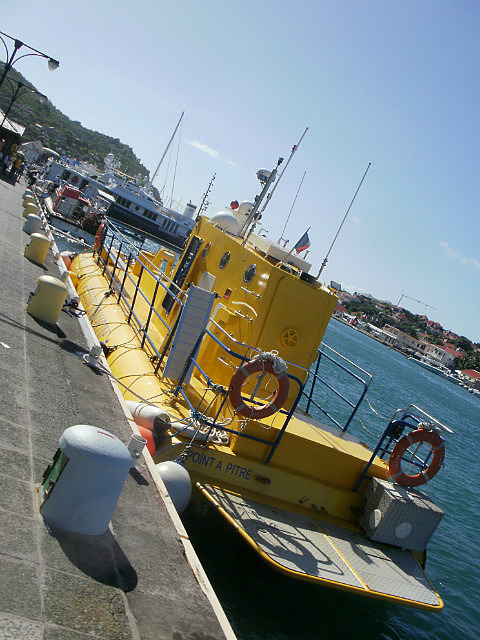 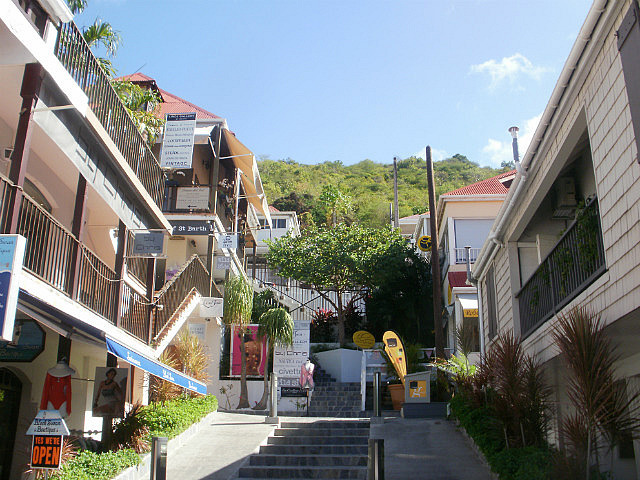 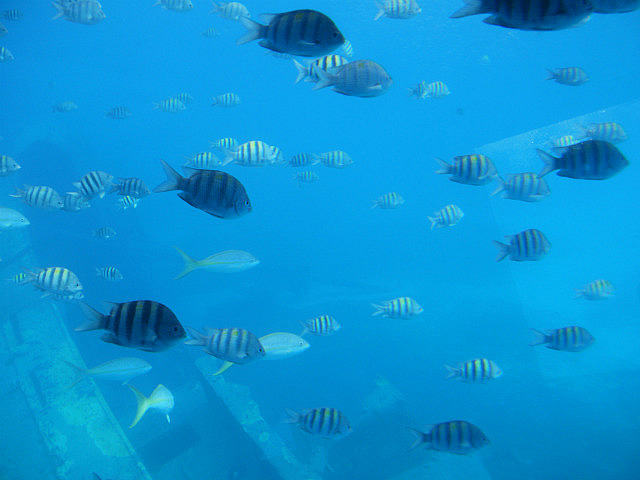 Fish at wreck from Yellow Submarine 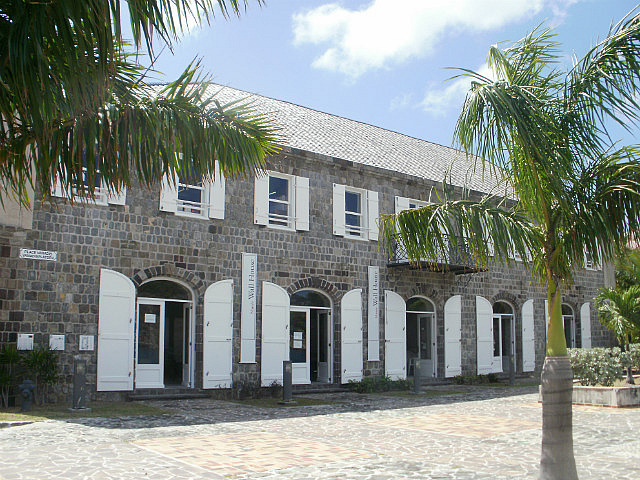 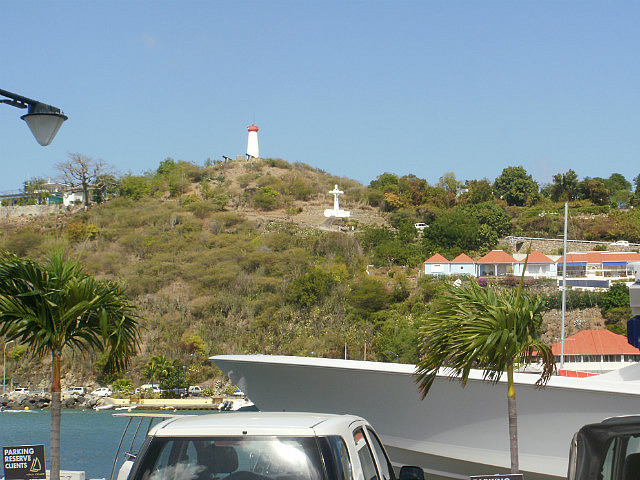 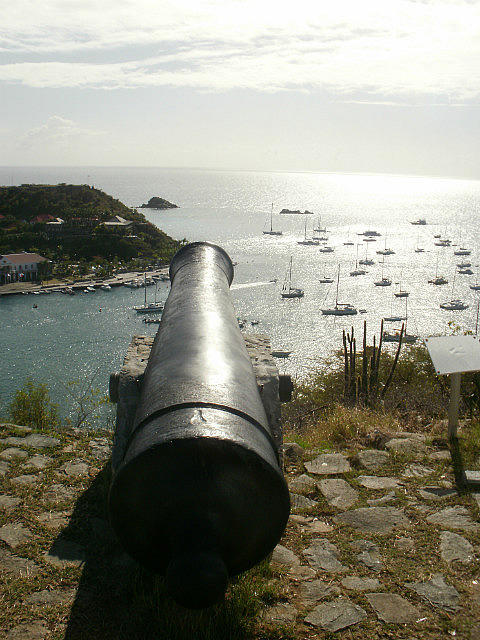