In the morning, I got up, had breakfast, and went off to the local mall to square away my phone situation. Unfortunately, the Orange desk at the mall couldn't help me un-deactivate my sim and referred me to some other place 20 minutes away with no directions. Most of the other cellular stores (including the one I originally got the sim at) didn't have prepaid sims, and wouldn't give me a sim with any sort of plan without an Israeli ID, which I don't have. They kept referring me to another store until I finally found one that would sell me a new sim card and put some minutes and texts on it. I also picked up a paper road map so I could find my way around.

I headed to another cousin's house that was up past Nazareth. I had never been to Nazareth (and really, I still haven't as I'm not sure driving through counts.) However, from what I saw, it is a pretty city with very windy mountain roads and nice views.

My “quick visit” with the cousins turned into a longer stay as I was invited for “lunch.” This meal was not a noonish meal, but a meal for much later, when the kids came home from school. It was good, standard Israeli fare. After a nice chat there, I headed to Tiberias much later than I had originally wanted, but it was totally worth it.

Upon arrival in Tiberias, I drove around the city for a bit, just taking in the lovely views. One of the reasons I love Tiberias so much is that the Kinneret (Galilee) and mountains meet in such a majestic way. Several of the locals I spoke with said that one of their favorite things about living here is the Kinneret or the beauty, and they each had their own way of wording it. Beyond the natural beauty, the city has a lot of charm because it is very old. Even the modern apartments remind you a times past, both from their age and from the laundry hanging out to dry. I passed a cute little vegetable market that offered local fruits, veggies, meats, and fish out of little stands. In the states, it would be the hip little farmers' market filled with yuppies, but it seemed more like the market in St. Kitts where the everyday people go to get their food, which further added to the charm. Not all of the “old” is new-old either. A lot of the tourist sites are really ancient- graves of famous Rabbis, Crusade-era churches, Roman-era ruins. After my wandering, I checked into the Panorama Hotel, which I found by coincidence earlier as I was driving near the waterfront. The hotel is in a really fabulous location and some rooms have great views towards the Kineret, I suppose. My room has a view of the city, which is still pretty neat. The room is small with a very compact bathroom, but it was very clean- not a drop of mold anywhere. As I only really needed to sleep there, the smallness was fine by me. (It also had a TV and mini-fridge, for those reading who find that important.) The guy at the front desk was interesting. We had gotten to talking and when I asked about book-related activities he said, “you still read? Nobody reads anymore. All the information is on the TV.” He was pretty amazed at how “backwards” I was. (Despite those comments, there is at least one bookstore in Tiberias that I saw, and the lady there mentioned a couple of libraries, so I know it's not a view everybody here holds.) Fortunately, he also warned me about the rude guy at the restaurant next door. When I went out, the guy was very pushy and really wanted me to eat there, despite the fact that I wasn't nearly hungry yet. When I turned him down (politely) and kept walking, he definitely called me a bad name, which may have given me a bad view of locals if I hadn't been pre-warned that he was like that.

As some counter examples- everybody else I spoke with throughout the evening was extremely nice- I even got an invitation into a home on a future trip. Like midwest USA, many of the drivers were stopping for me to cross, even when I wasn't in a crosswalk and was waiting patiently or when they had the right-of way. (Not all of them were like that, so don't go running out in the street like you might in podunk USA.) The other people hawking food were friendly about it and most certainly didn't say anything bad when I declined. One local I spoke with even said that one of his favorite things about the city is the friendly people, which leads me to believe I'm not the only one who sees it. The meat restaurant guy seemed to be the exception to the rule, but there always is at least one.

Despite being dark out, there were tons of people out and about as this is a tourist town, and I was in the touristy part. Plus, it's Birthright season, so there were several swarms of college-aged young adults milling about. I wandered around that end of town, stopping to look at all of the old architecture. It's just blended into the city, which I think is so neat. You might be walking around a little shopping center and- BAM- right in the middle is an ancient stone building that was an important building 500+ years ago, just sitting there like another shop. Some of the ancient buildings have other uses today and house restaurants or other businesses. I just think that it's so cool that the history is right there and so easily accessible. By serendipity, I wandered past the town's art gallery, Amdur Fine Art, and popped in for a look. The pieces there were very cool- several of which were definitely my taste. It made me wish I had my home to put art in. My favorite was a HUGE painting that reminded me of nature and would have gone perfectly on the wall behind my couch, although it may have been bigger than my wall and not actually fit now that I think about it. There were also some with the shiny that reminds me of the stuff I LOVED when I saw at Kunst Haus in Vienna. Plus, it had some cool sculptures. It's definitely worth a look if you're in Tiberias. For dinner, I stopped on the Promenade at Coffee Bar Bolenat, which has a very cool-looking wooden counter. It reminds me of a fence made out of petrified forest wood or something. In any case, that was the coolest part. As they also had homemade pasta, I asked the waitress what her favorite was and what her favorite sauce was and ordered that (gnocchi with sweet potato sauce). It was good in concept. The gnocchi tasted right and had the right texture. However, the sweet potato “sauce” appeared to be creamed and mashed sweet potatoes. The flavor was nice, but it was unexpectedly gritty, there were skins in it, and not all of the sweet potato was mashed all the way, so there were chunks of it in addition to the gnocchi. While I most certainly will go home and try to make something similar because I really like the concept, it just wasn't well-executed here.

After dinner, I passed through the tourist markets selling toys, skirts, and souvenirs and went to the area of the waterfront where they have a light show every hour starting at 7:30. They use fountains to squirt up water either as a misty screen to project “movies” on. It was a cute show about the history of Tiberias and the music suited it well. It was a nice end to the day for me.

I really really really love Tiberias- everybody was so friendly, the city is very charming, the views are gorgeous. I think that this is a fabulous city. It's both great for a visit and, as I was told by several people from a restauranteur to the guy in the hotel lobby who invited me to play poker on my way in to bed, it's a great place to raise a family. Some day, I would love to have a little bed and breakfast here (or very close-even better would be someplace greener but nearby) overlooking the Galilee. I think it's my dream to someday be here (but not something I'm ready for now). 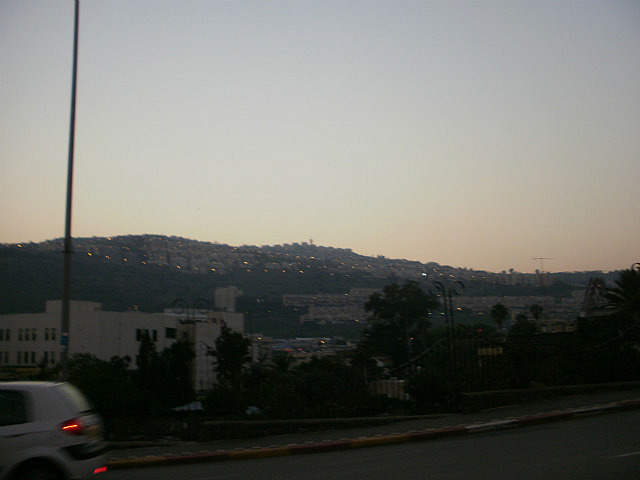 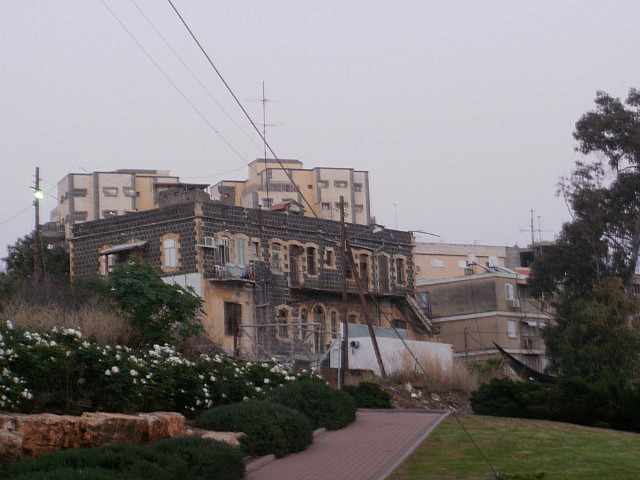 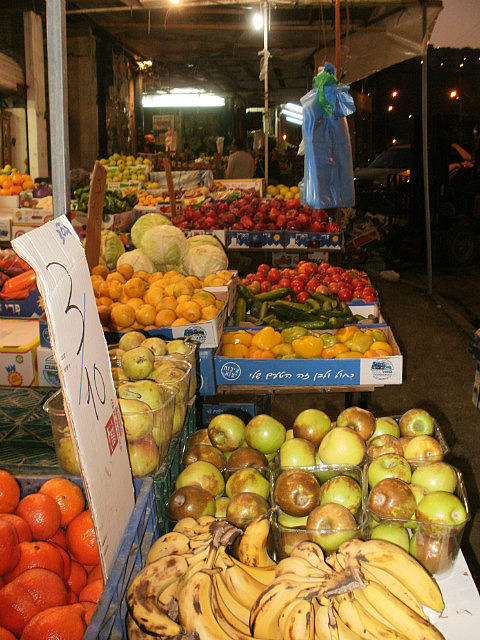 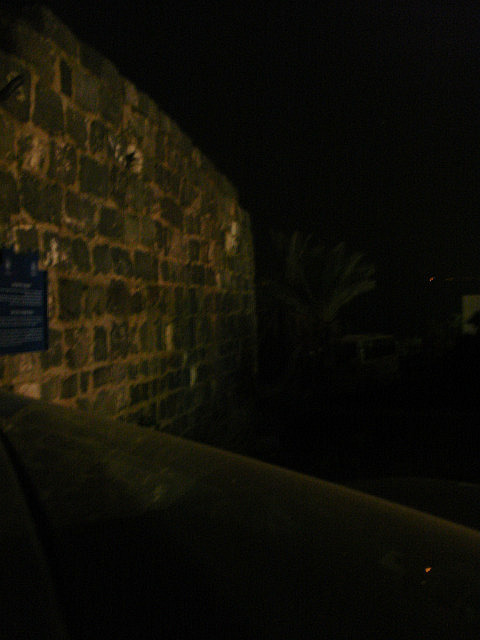 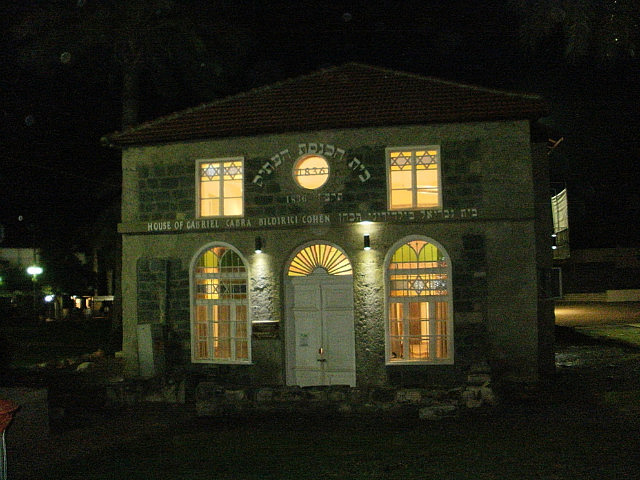 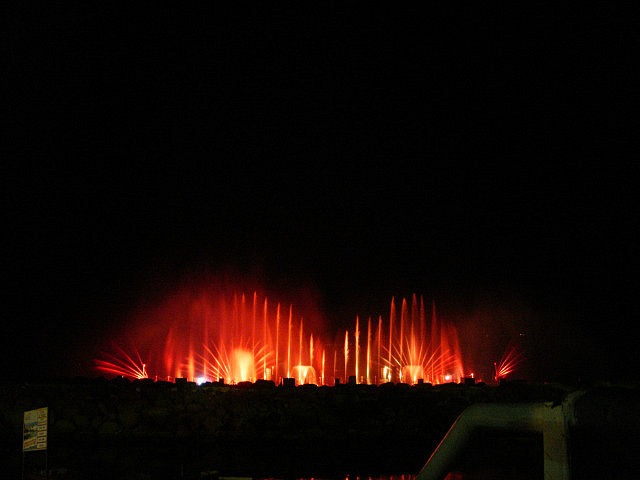 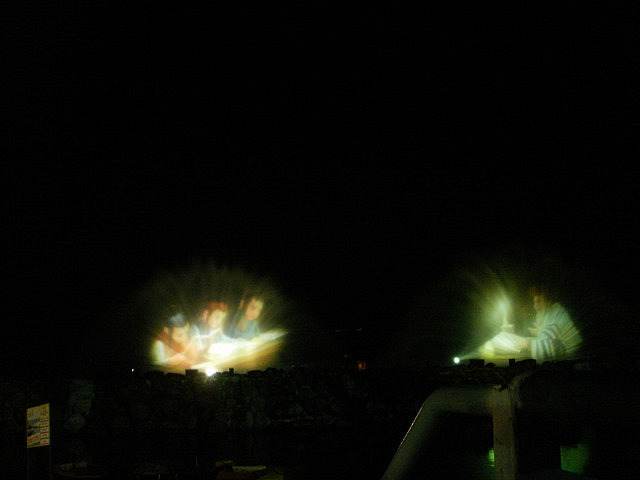 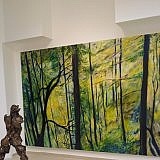 favorite at the gallery