Remember that time we hiked the Great Wall?

Just yesterday, I was cranky about the thought of eating at a chain for dinner, but this morning, I was ok with it. My stomach felt pretty greasy from the night before, so I wasn't upset about getting Subway for breakfast. We probably could have had the raw veggies, even though they're washed in China water, but we opted to skip them, just in case, which made for an interesting sandwich- cheese, pickles, and horseradish sauce, heated. Yum?

We met up at the Dongzhimen bus station where we took the 980 bus to Miyun (about 15 RMB ~$2). It took a few hours. When we got off the bus, we took a cab to Jinshanling Great Wall. The cab driver said it would be 300 RMB one-way for all 3 of us, which we felt was a rip-off as we had seen something on the web saying it should be around 15 RMB. The web was just plain wrong. We ended up negotiating 500 RMB for a ride there (~80 km), him waiting, and a ride back. He spent a significant amount of that in tolls, and some more in paying a parking fee at the Great Wall. Plus, we stopped for gas and were able to see that it wasn't cheap. Maybe you can get away with 15 RMB per person one way if you cover tolls and gas, but even in the metered cities with no tolls 15 RMB wouldn't get you to the wall. One benefit of having a driver was that he dropped us off at one end of the section and told us he'd meet us at the other end of the section, whenever we were done. We were able to take our time and not feel rushed, which was good, given the strenuousness of the section we'd chosen.

We had chosen Jinshanlig for 2 reasons. 1- It is a less touristy area and we were assured that there wouldn't be any major crowding, even on a Sunday. 2- It is a less restored area, and hence a better hike. I'm not sure why we started at the downhill end, but we did, adding to the toughness. We had to climb a couple hundred stairs just to get to the Great Wall. Then, we did approximately a bajillion (+/- 10%) stairs as we hiked The Wall itself, and then a couple hundred more down. By the end of the hike, my legs were exhausted, and my knees were hurting on all the down (but fortunately not the up).

In my mind, before this trip, the Great Wall of China looks like it did in "Big Bird in China." The area between the first couple of towers was comparable as it was relatively smooth (if you can call cobblestones smooth), the towers had roofs, and it was generally restored so that all of the path was present. The area between the next 15 or so towers was not. The unrestored area is missing a lot of stones and pathway. In some areas, the dirt is pebbly and slippery. Many of the staircases are missing stairs or chunks of stairs, which is a challenge if it's one of the staircases where the stairs are only a few inches deep (not good for big feet) and the stairs are very steep (not good for short people).

Overall, the hike was amazing. We got a great workout, had a breathtaking view of the wall and mountains, and enjoyed ourselves immensely. I would totally do that again. There is a very good reason that this is one of the New 7 Wonders, and I liked it better than most of the others (after, we realized I'm only missing the statue in Rio). Also, it was significantly less crowded than any other I've been to. There were some other people on the wall, but not very many. I have a ton of pictures with nobody in them, which I can't really say for the other New 7 Wonders. Most of the people we ran into were "farmers" who were on the wall selling cold drinks or souvenirs. I was wondering when they farmed if they're at the wall every day (as they said). One benefit of the "farmers" though, is that they keep the wall clean. Plastic bottles can be sold to the recyclers for a few pennies, so the farmer/touts collect all of the bottles, flatten them, and then remove them from the wall. By the time we were done hiking the wall, there really weren't any other tourists left, probably because we got off to a later start than most tours did. The restaurant at the end was closed, and there was only one group of touts selling shirts that said "I hiked the Great Wall." The restrooms were open though, and they were nice. There were long rows of sinks to clean off in, which we desperately needed because we were so gross.

After we reversed the taxis and bus rides, it was reasonably late and we were a bit tired. We grabbed dinner at a Chinese fast food (or should I just say "fast food"?) place in a mall by the subway. I got some steamed buns filled with veggies (yum) and some garlic eggplant that was more garlic than eggplant. Seriously- I was tasting that for hours. One thing I noticed is that the bottle of brown liquid on the table was NOT soy sauce, as it would be in a Chinese place in the US. It was vinegar, which actually went much better with the steamed buns.

After dinner, we went back to the part of town where our hotel was, but first walked around and saw the nice fancy huge hotels, somebody with starfish on a stick that was bitten into, and the ladies dancing in the street again. 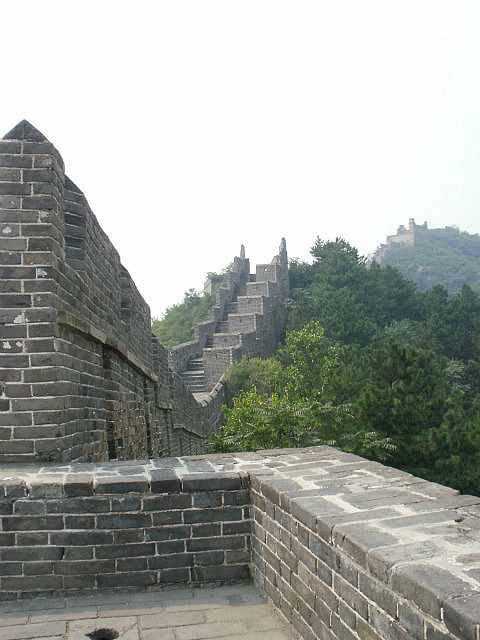 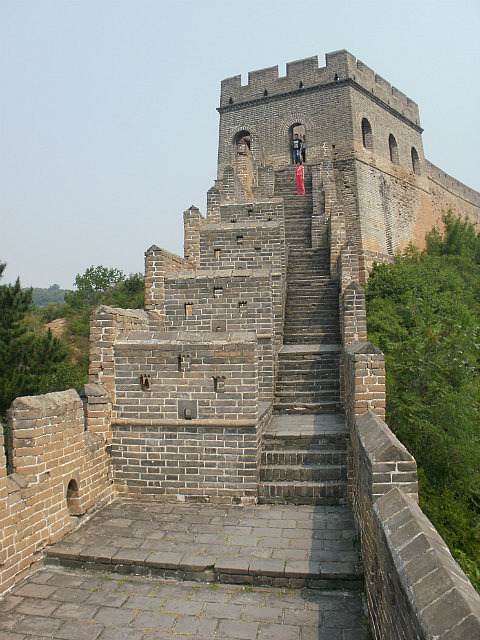 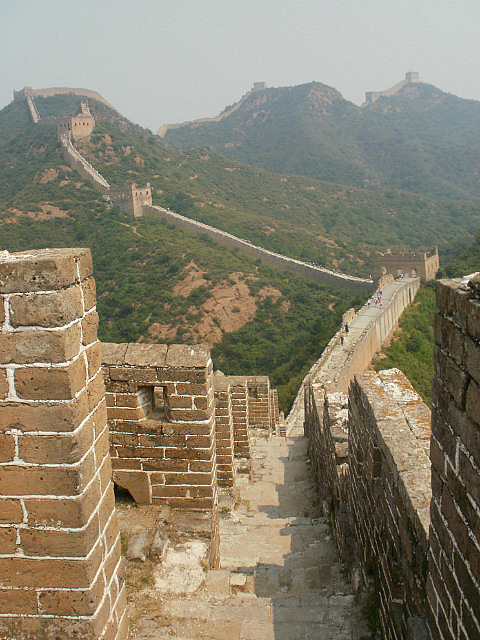 View of a few towers 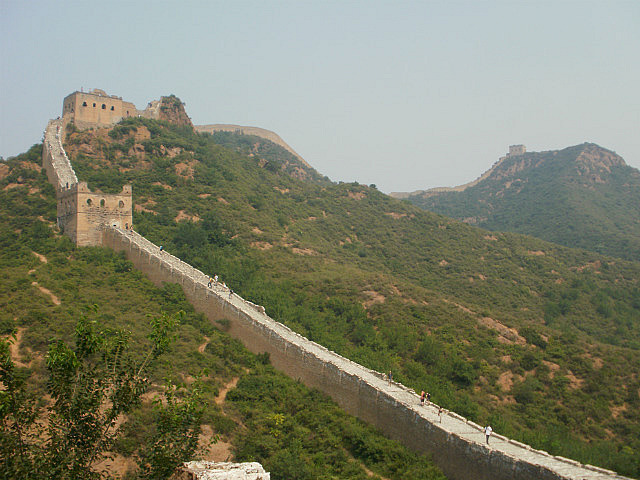 View of the mountains 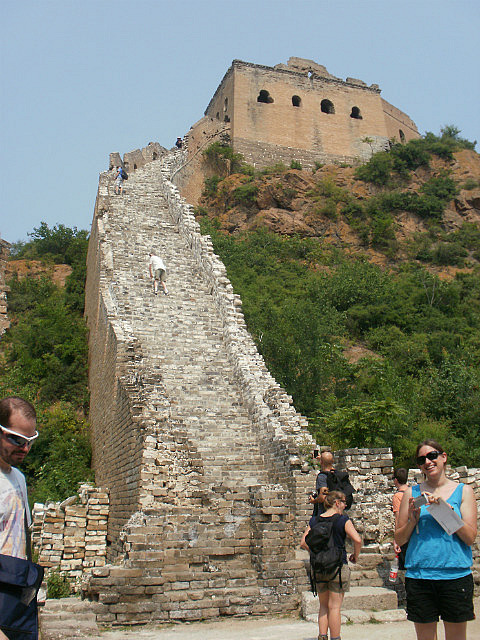 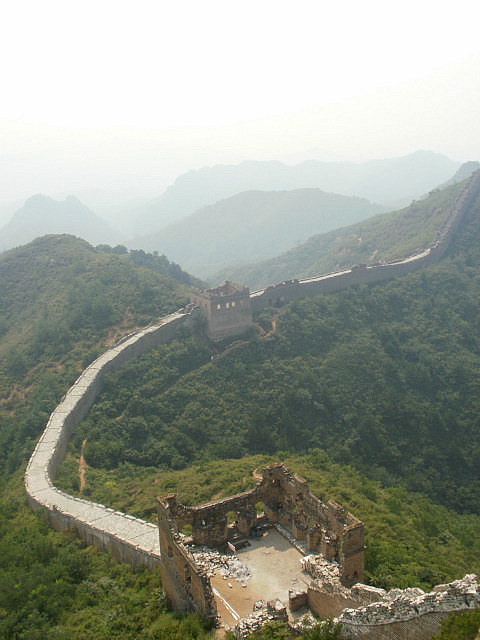 From the top of one of the Jinshanling towers 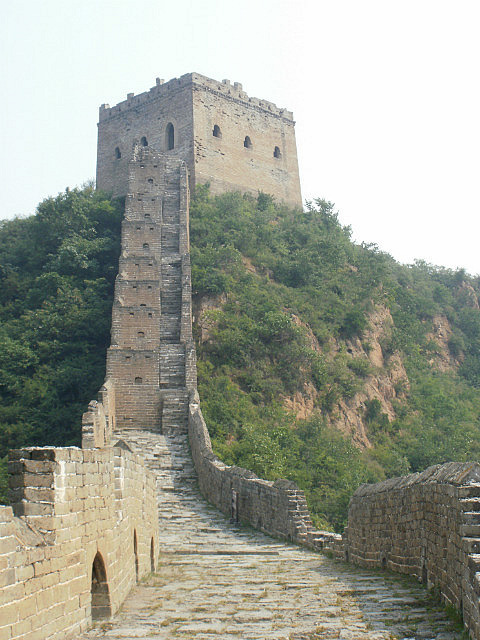 More fun stairs and nobody around 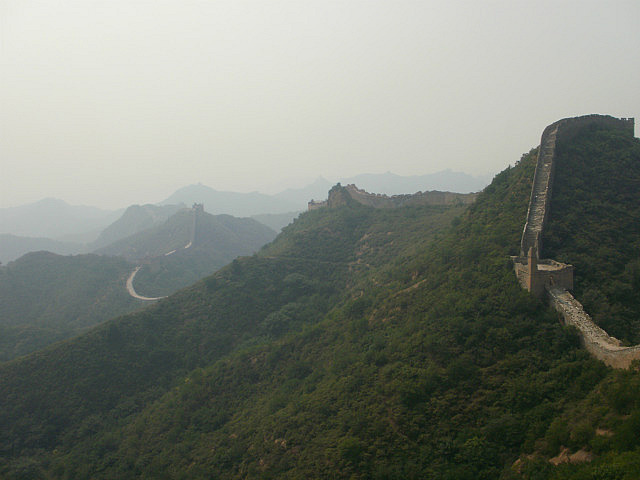