We landed in Beijing today. Immigration and customs were surprisingly easy to get through. The immigration officers are encouraged to process quickly by the ratings buttons they had in front of each processing station. You can press a button from a selection of green or red smiley (or frowny) faces to indicate how pleased you are with your service.

We got cash, change, and waters at the airport before heading to town on the airport express train (25Y). It was crowded, but not ridiculous. When we transferred to the main subway, the trains were ridiculously crowded. It was not pleasant to have luggage on that subway. People don't wait until the exiters get off the train before pushing their way on to the train. As a result, there's a big cluster of people all pushing on each other in every which way and teh trains take longer to unload and board than they should.

After transferring, we got off at the Tiannenmen East station as the map of the hotel that was on the site we booked through put out hotel right IN Forbidden City. After realizing we couldn't cut through, we went around it towards the street the hotel is on. Every few blocks we asked people to make sure that we were on the right track. Between the map, picture, and people with a little English, we got there. It was good we asked for help because the hotel location is not where the map put it. It is close, but on the other side of the moat and a big road. The last Chinese person we met who helped us get here asked if we wanted to go for beers. We insisted that we needed to change and get cleaned up, but maybe later. (Culturally, I think "maybe later" means polite "no".) Eventually, we agreed to meet her in an hour. I was thinking that it might be nice to have a tour guide who could help us out.

We got to the hotel and were met with a super-fabulous unexpected surprise- Jen!!!!!!!!!!!! The friend who we had come to see had taken an extra 2 days off of work to come tour with us. After a big round of hugging, we got checked in- mostly. Jen's passport was elsewhere so they wouldn't let her check in with us, but we figured we'd get that resolved later. From the hotel, we went to meet our new Chinese friend, but she didn't show, so we went to dinner without her. We ate at some place around the corner that had an English menu. Jen was so helpful to have around, not just for her Chinese language skills, but her culture skills as well. She ordered the best tasting thing any of us did (some eggplant, potato, and pepper dish) and showed us how to eat Chinese family style. This is different from US family style where you have central plates and your own plate. Here, we were all eating straight off the central plates.

After dinner, we went wandering around town. Again, I'm really glad we had Jen, because she was able to tell us what was worth seeing as she had been here before. We saw the Forbidden City entrance area, Tianenmen Square, some of the various gates, and a boy peeing in the middle of the sidewalk. Apparently, it is very common here for kids (and adults) to urinate in public, just feet away from everybody walking by. Other habits I'm not used to: We passed a construction site and all of the workers were camped out in the site. I guess a lot of construction workers are migrant and need a place to stay while on the job. There are a lot of cigarette smokers here. Not the most of any place I've been, but compared to St. Kitts where pretty much nobody smoke cigarettes (I have yet to see a single Kittitan do that), it was heavy smoke. Very well-marked public toilets everywhere. We didn't use any, but the signs were big and bold (moreso than the signs for many businesses) and there were a lot of them. I don't know if that's because businesses don't have public restrooms or the government is doing everything it can to curb the mid-sidewalk tinkling.

As Lisa and I were exhausted, we headed back to the hotel via one of the main shopping streets. It was very well-lit. On a side street from there, we went down "snack road." This was the land of food on a stick- the best kind of food. Everywhere, there were delicious-looking fruits on sticks that were then covered in a caramel/sugar candy coating. Too bad they were washed in water I don't trust to drink or else I would have loved to try some. We did end up getting some (really bad) doughnut balls on sticks and some fried mangos on sticks. (The mangos tasted like fried much more than mango, which was surprisingly not that great.) Things we saw on sticks but didn't eat: durian (If Andrew Zimmerman puked, I'm not brave enough to try this on my first day), jackfruit, scorpions, starfish, various bugs (some of which were live enough to be wiggling around), corn, assorted meats, octopus/squid, and fish. There were also plenty of non-stick food like dumplings, eggrolls, and candies.

After our "dessert run" on the snack street, we headed back to the hotel. On the way, we passed another food street and a group of people dancing on a street corner. The little old ladies all doing the same moves to music were very cute. We had figured we could just get Jen in. The people at the desk were pretty adamant that she couldn't stay, despite having a photo ID, work permit, copy of her passport/visa, and various other ID/documentation. Because she didn't have the physical passport itself, they wouldn't let her stay because they didn't want to "get in trouble with the police". We tried pointing out that the police wouldn't come and knock on the door in the middle of the night, that there had to be some consideration for people who had their passports stolen, that they only had to show the police a copy of a passport, not the actual passport, and other logical arguments, but to no avail. We tried a bribe- "How much money can we pay so she can stay here?" but that didn't work either. Ultimately, she went and stayed with somebody she knew, but it sucked because I feel like anywhere else they would be civilized enough to make considerations and accept a passport copy (plus the other ID) or corrupt enough that a few extra yuan would have taken care of the situation. 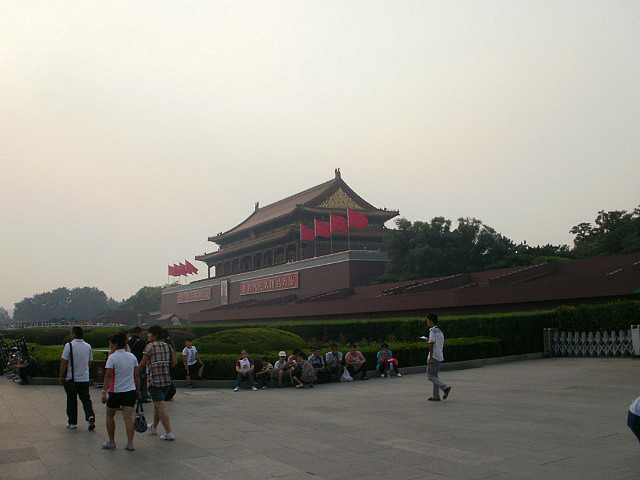 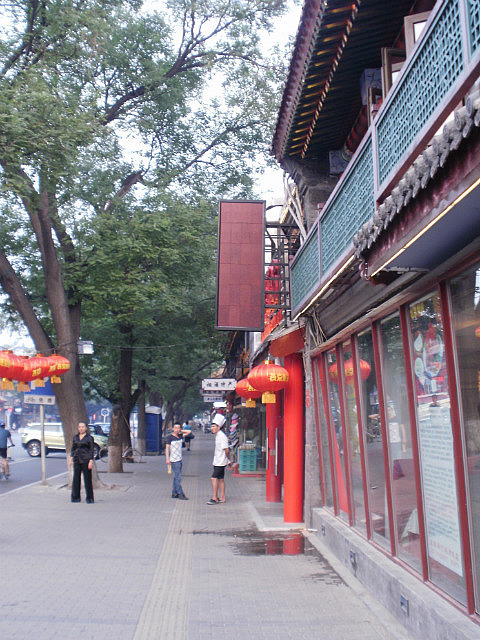 Street by our hotel 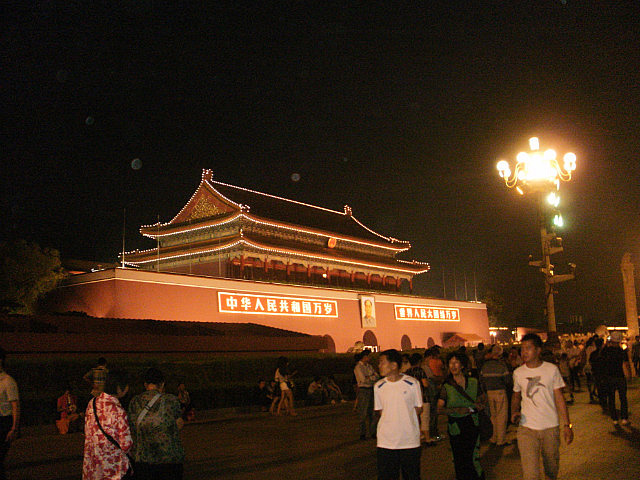 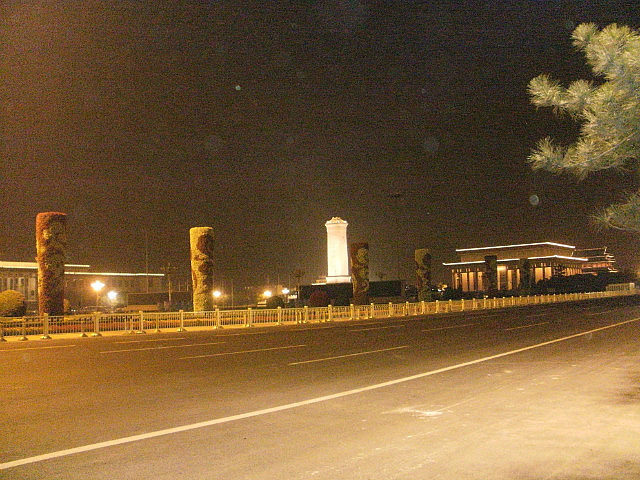 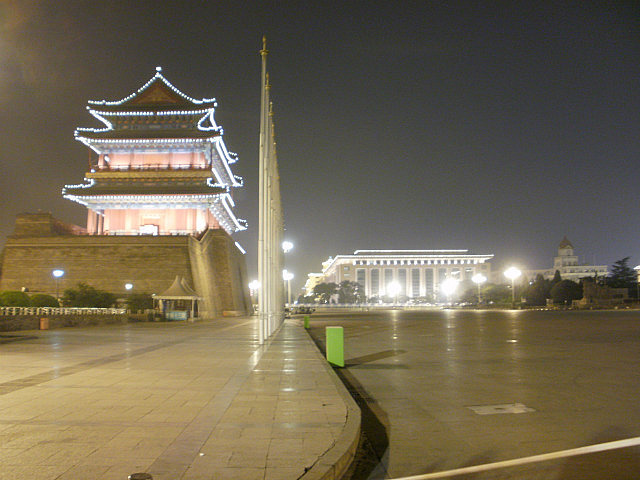 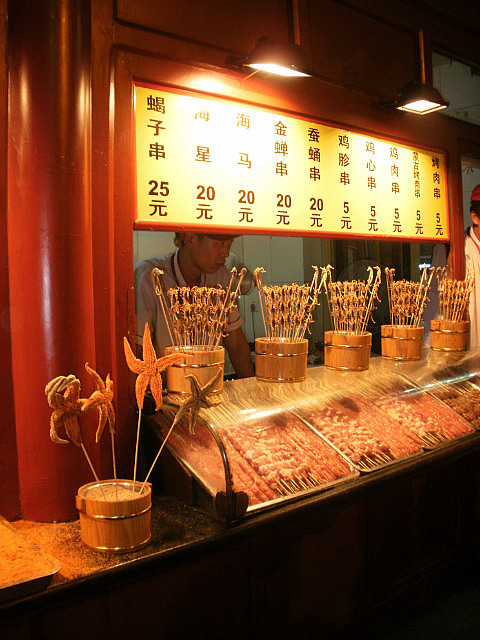 Starfish and bugs on a stick 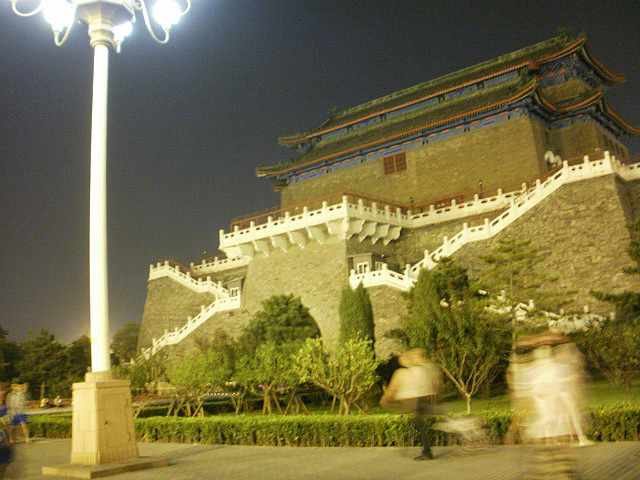