The start of a holiday weekend

Friday night, I saw MIB3 in 3D in the theater here. It was the first show I'd seen there. Honestly, it's like a regular movie theater in the states. There were average-type seats, a regular-sized screen, and a normal sound system. It was nicely air conditioned- I was glad I wore pants, I wouldn't have been upset to be wearing long sleeves. After the movie, we got soft-serve ice cream at the place right next to the theater. It was very watered down and didn't have a strong flavor.

Next, we ended up driving the road that goes around the island. Technically, we were trying to get to black rocks and passed it because it's hard to find in the dark. Regardless of our intentions, I was running low on gas by the time we got back. Fortunately, there is at least one gas station that is open late. After 11pm, you get to pump yourself, which is something I miss, so I was happy about that. Also, this one appeared to take credit cards, which none of the others I've been to do. (Caution- I didn't actually try a card because I was already prepared with cash, but they did have a sign for it.)

Finally, we ended up by the strip, just chilling. I got home pretty late, which seems to be the standard way to do Friday night/ Saturday mornings here.

Of course, that didn't help me want to get up and go to water aerobics on Saturday, but I did. It was fun, but I really liked the pool for what we're doing than the ocean.

Despite being tired after not getting a lot of sleep and also working out, I didn't nap. I showered and met a friend downtown who took me over to Mission. The church in Mission was having a food-fest and Whit Monday event. I was absolutely starving, so I got some Johnny Cakes (basically deep-fried white bread dough) and conkee (you'll have to excuse my spelling). The conkee reminded me of a tamale in that it was a whole bunch of things mixed up, wrapped in an almond leaf, and steamed. I'm not totally sure what was in there, but it was good, whatever it was. It was also pretty filling. On the menu, I noticed monkey. Yes, they eat the monkeys here, just like people in the states eat deer. I didn't get that. Later, I got boiled peanuts (had the same texture as kidney beans, but the ones I got were so salty I couldn't really taste a lot of the flavor), and sand-dried peanuts (they cook them in the sand somehow, and they come out with a very popcorn-ey flavor). In addition to food, they had entertainment. There was a Maypole that some kids danced around and wove different patterns with the ribbons. There were carnival-style dancers accompanied by a drummer and a guy playing what appeared to be a glass soda bottle, but sounded like a flute. They also had a "drag show," followed by a band. The drag show was really just guys in dresses on a stage. There wasn't the glamour I usually associate with a drag show. Also, as this was a church function, the guys were mostly wearing church dresses and not anything too risque. It was a ton of fun to hoot and holler at them though. When the band was playing, and even earlier, when they just had a CD playing, there was a guy dancing to the music. He was very alone and acting a bit odd. At first I thought he was drunk, but the people I was with told me that he's crazy. Based on some of his behavior, I wonder if he was autistic. It really makes me wonder if people here recognize the signs and know what to do about it. In the US there is a big fight for acceptance and understanding right now, and I'm not sure if that is a big enough issue in St. Kitts to even make the radar at this point. What did make the radar is "men," which I found amusing. There are a lot of groups fighting for opportunities and rights for women, but not a lot focused on men. One guy had a shirt on (that I also later saw on somebody else a different day) that said "Save our men. Children need fathers too." It was definitely thought-provoking. Overall, I feel like I got a dose of culture today. I'm not quite sure how somebody who was just visiting and didn't know anybody would get find out about a festival like this, but if you're ever visiting and get invited- go. 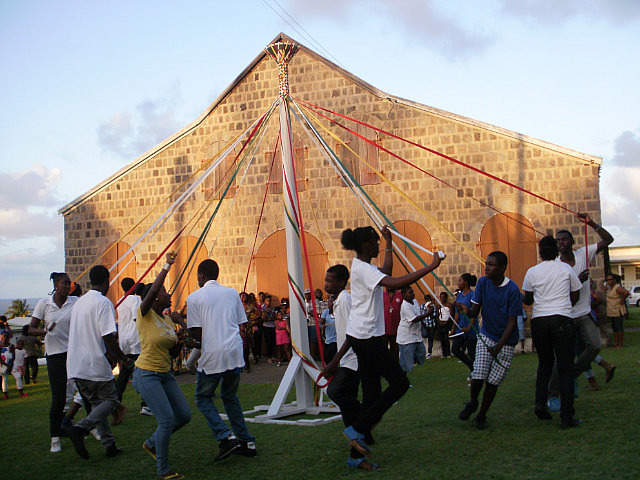 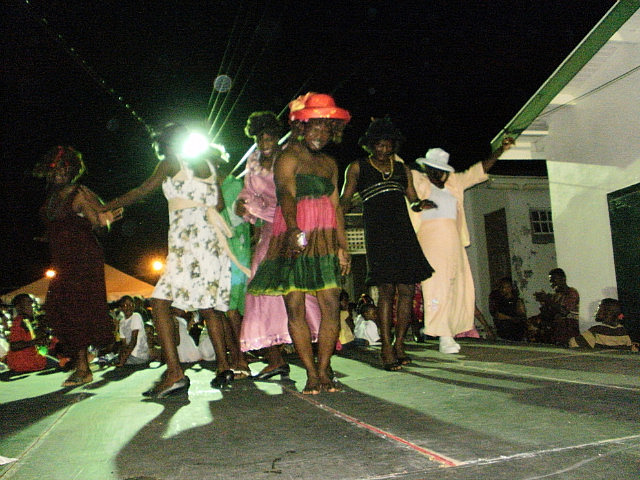