Travel in the Coronavirus era

Today we go on our "Babymoon," our last hurrah before everything gets complicated.
I have never seen the airport so empty in my entire life. 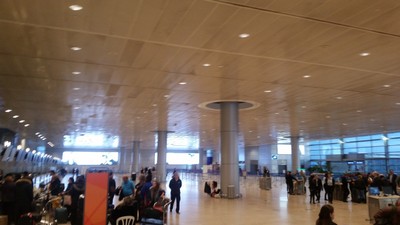 Tons of flights were cancelled because they were to Coronavirus countries. And non-residents who have been to those countries in the past 2 weeks have been denied entry for a while, so there are way fewer tourist groups and business travelers here that need to get home. (As an example, my big international company has banned all travel for conferences, meetings, trainings, or other non-essential reasons, even to places that don't have hese legal restrictions.)
Also, I think a lot of people don't want to take the risk of getting the virus or the hassle of being quarantined in case there happens to be an outbreak while they're in some foreign country, so they decided not to fly. But some guy with it was at my local grocery store and a bunch of other places last week, and anybody who was there at the same time is supposed to quarantine at home, so I figure it's less risky to get out for a while than stay.
So the airport was a ghost town. 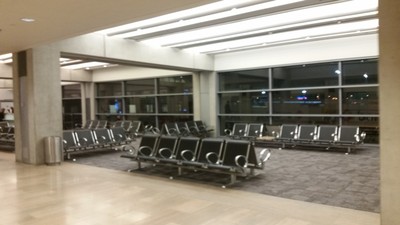 However, the flight was packed. I guess anybody who needs to get out has a very limited selection of flights, and so everyone was crammed in.
Most people seemed to be behaving relatively normally. Only a few wore standard medical face masks, and I was inclined to ask them whether they were sick or stupid, but didn't in case they were the tiny percentage of the population that has some compulsion to touch their face and needs the mask to avoid it. Of course, there was one guy in one of the face masks that's actually rated to prevent virus-sized particle entry, which was actually somewhat smart.
We just washed our hands after every step where other people touched our tickets and/or passports and lysol-wiped down the passports, tray table and arm rests on the plane.
When we landed in Athens, we did the same and even lysol-wiped the things we'd touch in the rental car. I don't know if we're overreacting, but it can't hurt, and I don't particularly want to get sick.

We drove to our hotel, Tier Collection.
The hotel is nice and fancy and probably has more stars than we're used to. It's just in a part of town that seems a bit dodgy after 11pm. While I'm somewhat blissfully innocent and just noticed people were out on the street smoking, my partner paid much more attention to what they were smoking. He couldn't think of something to smoke that he didn't see. He also says he saw a prostitute, but didn't point her out at the time, and I hadn't noticed. We're debating whether it was just somebody dressed a certain way or an actual prostitute.
Despite the apparent drug issue, we didn't see anybody who looked particularly dangerous and there were other people in the street. So we ventured out a block or two to get some food. We saw some Syrian/Lebanese place that looked good. Until we approached it and I saw a rat running around the floor and under a table.
We turned away and ended up at someplace that had fries, chicken, and coleslaw. It's not the most Greek first meal, but it's a snack and almost midnight, so I'll take it. 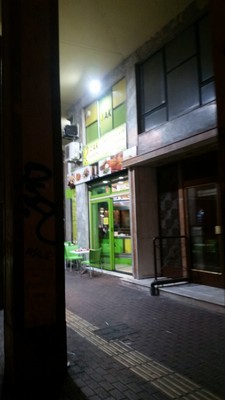 Fortunately, there are also lots of convenience stores open that sell produce, so we were also able to get some bananas for health and also so I have something for when I wake up in the middle of the night hungry.
We took the food back to the hotel and got settled in. The food was simple, but the garlic mayo made it surprisingly good. Not sure that's the last thing I want to eat before bed notmally, but given the time, I'll take it.

Posted by spsadventures 15:37 Archived in Greece