I got up early and ran. I probably didn't do more than 2 miles, but since I hadn't run in at least a week, even that is ok. Then, we went for our tour. The tour guide was very nice and very knowledgeable. He is apparently some sort of ornithologist, and I guess he does these tours to pay the bills. Our first stop was a park. Think Lake Nockamixon or Lake Needwood area- somewhere you might go just to hang out in nature of hike and might coincidentally see deer, foxes, squirrels, or rabbits. Now, imagine that instead of those animals, you saw kangaroos, wallabies, koalas or, well, they still had rabbits. We saw quite a few koalas in the wild. They are a little easier than foxes to spot because they really don't do a lot of moving. Only one of the ones we saw was awake, but it was still fun. Each time we'd get near one, the guide would ask "Who can spot the koala?" and we'd all start playing Where's Waldo up in the trees. Some of them were pretty hidden. We also learned a lot about the birds and trees in the area. For example, eucalyptus is toxic unless it is cooked or unless you have some crazy stomach lining that the koalas have. Also, eucalyptus trees shed both bark and branches, so you should never sleep under them. We hiked up to an area called "Big Rock" that the aboriginals used to use as a meting place. We saw the water hole they made, scars from their campfires, and some rocks they had sharpened to use as tools. Also, the view was amazing- we could see for miles. This view helped the aboriginals see if there were any other groups of people in their territory that didn't belong. After that, we went to lunch. The sandwiches and fruits weren't too exciting, but we did lear a lot about the first Australians. Another group met up with us and their guide sang us a song called "Waltzing Matilda." In the song, a wandering Aussie "cowboy" (called a swagman in Australian) is looking for work from a rich guy, but the rich guy refuses him. One of the rich guy's sheep wanders over to the swagman, who kills it and shoves it in his bag. The rich guy calls the cops, who chase the swagman until he jumps into a billabong (dried up river/lake bed) and kills himself. From then on, his ghost haunts the rich guy's area. Apparently, the point is that Aussies like being free or something like that. After some Eucalyptus tea (cooked so it was not toxic), we headed off to see some kangaroos. The kangaroos were at another park. This one was designed as a bird sanctuary, but there was plenty of non-bird wildlife in the area as well. We did see plenty of birds though. We saw some rare grey geese, some sort of black duck thing with a gobbler, and some emus. The emus make a sound similar to a timpani or base drum. We were able to get pretty close to them before they startled. Next, we went in search of kangaroos. There were quite a lot around, although like deer, they run when they see you. Because the sanctuary was so big (miles by miles) and the kangaroos weren't even confined by the short fences that marked the edges, it was really hard to get that close to them. We eventually did sneak up on some by using our mad quiet skillz. When we got back from the tour we went out for Mexican food, which was pretty standard. The theory was again, come back to the hotel and rest, then go out on the town. It was still about two hours before the night clubs would open, and we were completely beat by the sun, all of the hiking, and me also by my morning run. Oops, we did it again. At about 3 in the morning, we were all up, but it was a little too late to go. Plus, I was still exhausted and ready to go back to sleep. Apparently we're not too good at this "going out" thing, but hopefully we'll get to in Sydney or someplace.

Tomorrow: whatever is open on Christmas day. 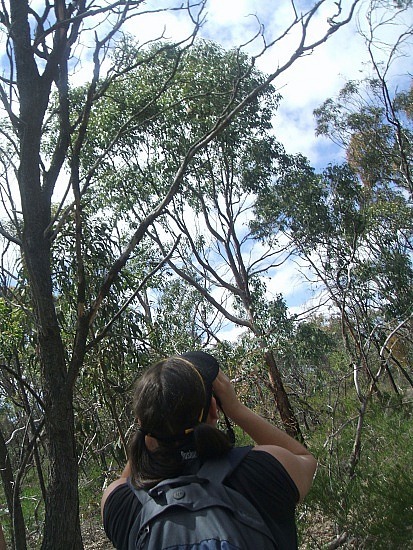 Can you find the koala? 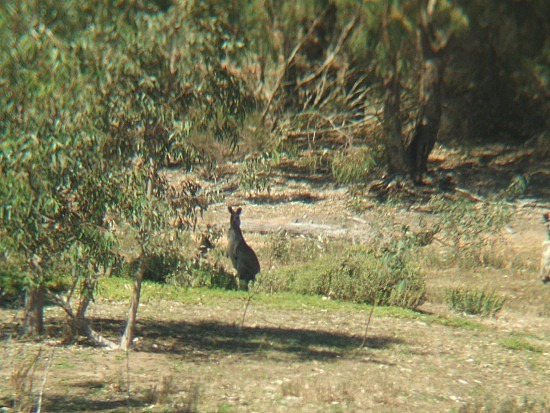 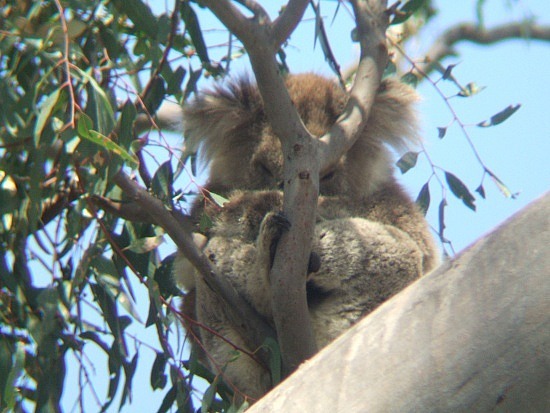 Koala in the wild