Today we are off to see Mont St. Michel, which is a 3+ hour drive from Paris. We had no issues getting our rental car and were soon out of the city.
The road to Mont St. Michel is mostly highway that runs through Normandy. There are tolls every few miles. I think we must have paid about 20 Euro in tolls one way, but it's hard to know as they come in odd amounts- 3.7€ here, 5.7€ there. The scenery is mostly flat farmland with scattered forests, but not midwest-see-forever-flat, more of a flat enough you can't say there are hills, but there are gentle slopes and rolling waves in the land. It's very green here and the scenery is only occasionally broken up with a tiny industrial zone, village, or rest stop.
When there is some point of interest, the sign for it contains a sort of drawing for it in addition to the name. So even if you don't recognize the name, you can tell that it's a church, or park, or castle, or World War 2 beach.
We knew we were hungry and that food at the actual tourist site would be super expensive, so we agreed to stop somewhere before Mont St. Michel.
We attempted to stop at the first place I found, but the waiter came out to tell us that they were having a private party and he couldn't seat us. We passed some restaurants that were rejected, and found ourselves already in the Mont St Michel tourist site. We parked and decided to see if the part of the town not on the abbey island would have cheaper food. The first restaurant we ducked into was empty, but the guy told us he had no room for 2. I thought he was joking as it was pretty empty. But he was serious as they were set up for groups that were just arriving. 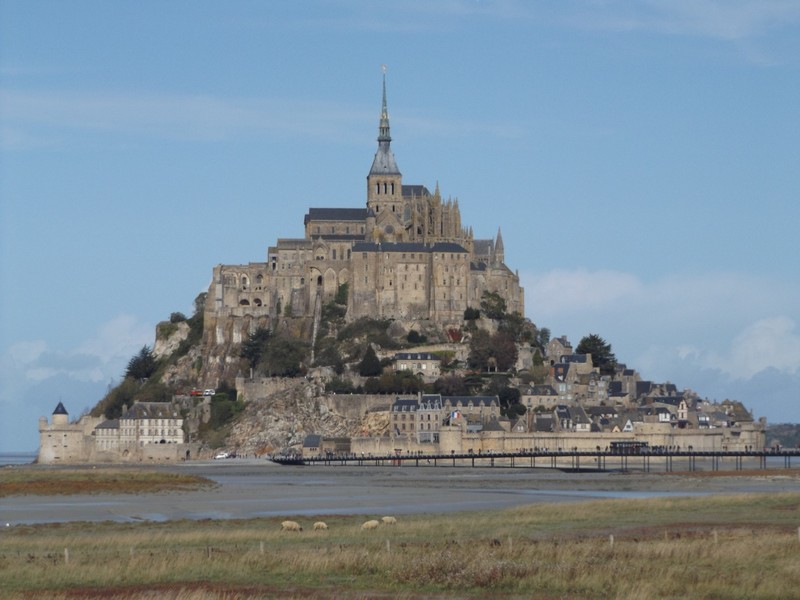 We continued on our way towards Mont St. Michel, and ended up walking the whole way there. I'm glad we walked it instead of taking the shuttle bus. The walk gave us a chance to view the island from multiple angles, to look out over the grassy area and watch the sheep munching away, and to just absorb the scenery. 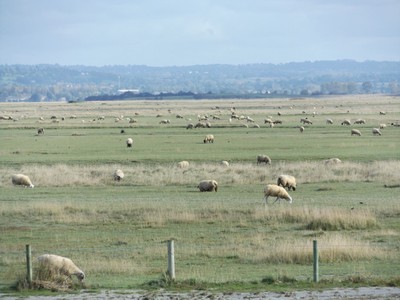 There was also an option to take a (paid) horse carriage ride with some of the most loudly clopping horses. 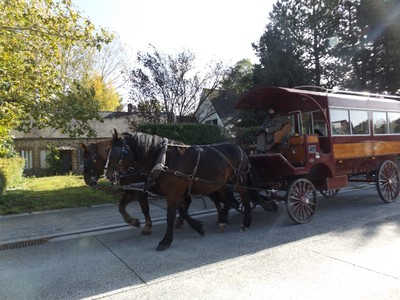 As we approached, I spied what looked to me like a Shinto arch. We speculated as to what it was- maybe a high tide marking, maybe showing where the 10-year flood level would be (it said 10 years on it). Later, we found out that it was exactly what we thought- a Shinto monument at the monastery because their twin city is in Japan. 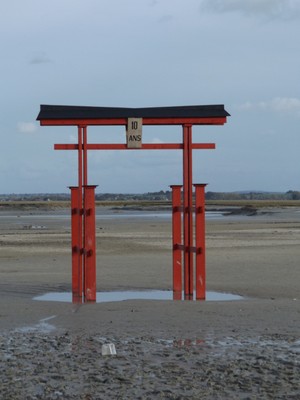 We walked through the city gates, still looking for food, and resigned to the fact that prices just doubled compared to anything we would have found outside. The first restaurant we saw had a large group in front of it. The tour guide explained that the best omelettes in the world were made here and we could look through the window to watch them do it. The lady making them just looked like she was whisking away, and they came out huge and looking more like a highly risen pancake than eggs, so we checked the prices. It was 40€ for one omelette. We were sure we could do better than that. 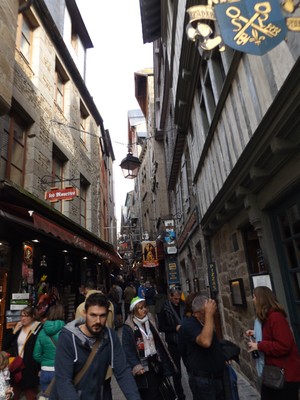 As we walked along the cobblestone streets past the old buildings, we noticed that a lot of the restaurants featured the "Mont St. Michel omelette." When we finally settled on a restaurant, I had to order it to see what the fuss was all about, (but paying only 16€, which felt like quite the deal.)
The omelette was too huge for it to be a one-person meal. It's best split. The outside is sort of like a skin, and the inside is foamy and somewhat runny. All of the flavor has been beaten out of it, which I didn't mind too much as I'm not a fan of eggs. But it really needed to come with something in order to make it edible past a few bites. Fortunately, the table had a powerful French mustard that helped. Still, no variety in a dish that large wasn't very appealing, even if the texture was nice.
After lunch, we continued on our way up to the abbey. The streets are steep and narrow, lined with tourist shops every step of the way. It's very uphill, and just when you think you've arrived, you start the stairs. This is a mountain after all, and I suppose we should have expected multiple flights of stairs. 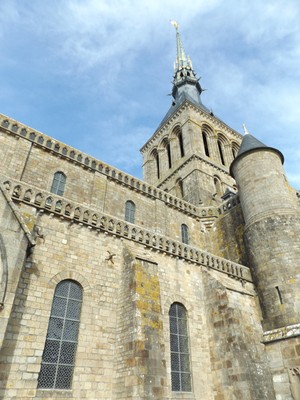 We had timed our abbey visit for the afternoon English tour. The guide was very knowledgeable and really helped us understand the abbey. She explained that the abbey was built at the very top of the mountain by a monk who the Archangel Michael came to in a dream and told to build it. It has been damaged and rebuilt several times over the more than millennium that it has been around. So, there are sections built in the Roman style, sections built in the Gothic style, and sections built in more modern styles. 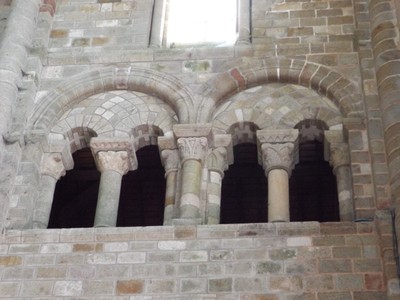 Also, we're really only seeing the bones of the building. In the medieval times, the walls would not have been bare stone. They would have been whitewashed and painted with the colors of the day. To make an equivalent, we're seeing the studs of a modern house, after the wallpaper and drywall has been torn out. 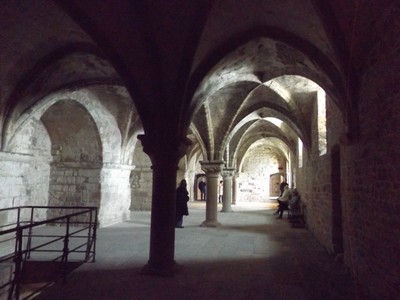 Knowing that paints quite a different picture in the mind of what it would have been like as a pilgrim here. The monks have always accepted pilgrims and tourists as it was popular to come on a pilgrimage in order to see if you could get the Archangel Michael to put in a good word for you with the guys in charge of heaven. We saw where the rich pilgrims would be put up with fireplaces and space, and where the poorer pilgrims would be put up in a slightly lesser condition. But the monks didn't have heat at all, so they were worse off, especially in winter. Except, they did have heat in the infirmary. 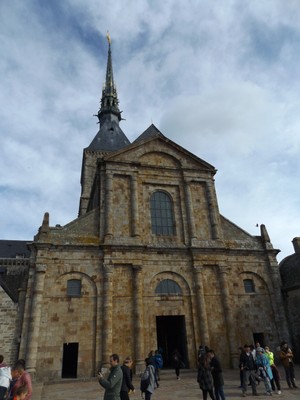 So the monks were doing their thing, accepting pilgrims (who brought donations), selling souvenirs of the pilgrimage, and adhering to a Benedictine code, when the French revolution happened and made them all flee. The French revolutionaries took over the abbey and turned it into a prison.
We saw the equipment they installed and used to haul up all of the supplies needed for the many prisoners kept here. A couple of prisoners would hop inside a big wheel and walk. That would pull a rope that raised packages of food and other supplies. 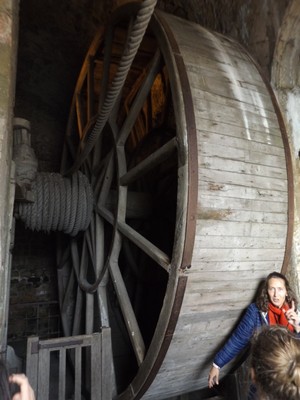 The history of the Abbey continues without monks through the time when the Germans occupied it in World War 2 (but didn't damage it), until more recent times when a group of monks and nuns were invited back. They live here today, although they aren't Benedictine per the guide. 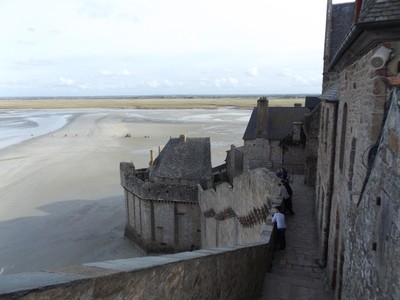 We walked the city ramparts back down to the entrance. They have a great view of the plain surrounding the abbey. At the time we were there, the water level was low, and the abbey was basically in a mudpit and wasn't really on a detached island. Hundreds of people walked across the mud towards the abbey, many barefoot. People still do this today as part of their pilgrimage. (We had used the bridge.) 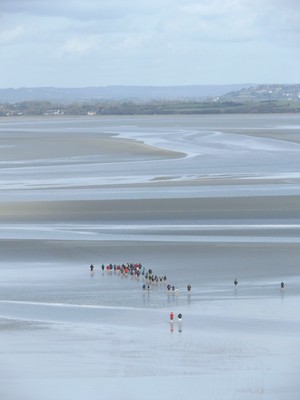 pilgrims walking to the abbey

The ramparts were much less crowded than the city streets and had souvenir shops and restaurants on only one side. It was a pleasant walk.
At the bottom, we bought what they called a beignet, but it didn't taste any different than Dunkin to me.
The tour guide had told us to be careful with our snacks as the seagulls in the area were known to snatch sandwiches straight out of people's hands. We got to witness this first hand as a seagull made an attack. The stories are true. 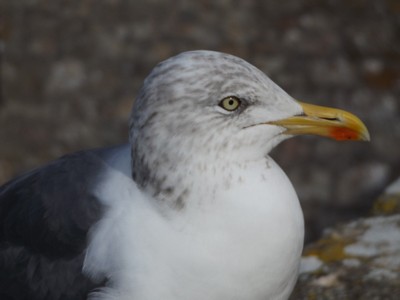 Having walked the half hour from the village to the abbey, we didn't feel the need to walk it back, so we grabbed the shuttle to the parking and headed back to Paris.
About when we wanted to switch drivers, we pulled over into a random small town that had some restaurants currently open, at least according to google. It was still a bit early for the French to be eating dinner, but we were hungry. Half the restaurants in town were closed and didn't even open until 7, so we got a nice view of the town, their pretty church, fountain, and town hall before we found a place to eat that was open. But we were able to get dinner and get back on the road. 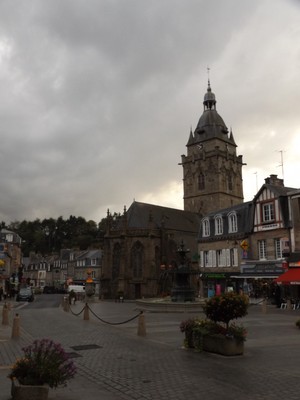 As I drove in the dark, I realized the impact of light pollution. The roads here (including highways) are not lit at night. So as I was driving through the countryside, I mostly just saw black and car lights. But periodically, we would come across a town that emitted a red glow into the sky. It would soon pass and we would be back to darkness.

Posted by spsadventures 01:09 Archived in France