We're staying at a proper hotel and not a hostel, but the breakfast is basically the same. Good thing I had some veg left over from last night.
We got on the metro during rush hour, and the trains were packed. As we moved out towards the suburbs though, they cleared out. By the time we were a few stops from Disney, there was one other family in our entire car.
You may be wondering why out of all of the fabulous French things to do in Paris, I'm going to Disney.
1) I've been to Paris 4 times in the past 4 or so years, so I've already seen (and still remember) many of the wonderful sights there are to see. (See here, here, here, here, here for those blog posts.)
2) The friend I'm travelling with really wants to go.
So, we're going to have a fun day riding rides and taking pictures with Disney characters.
The train to Disney is mostly above-ground, so I got to see a wide variety of neighborhoods and architecture. Some areas contained neat little rows of quaint houses that were probably around when Les Miserables took place. Others contained funky modern factories and schools with rooftop gardens. 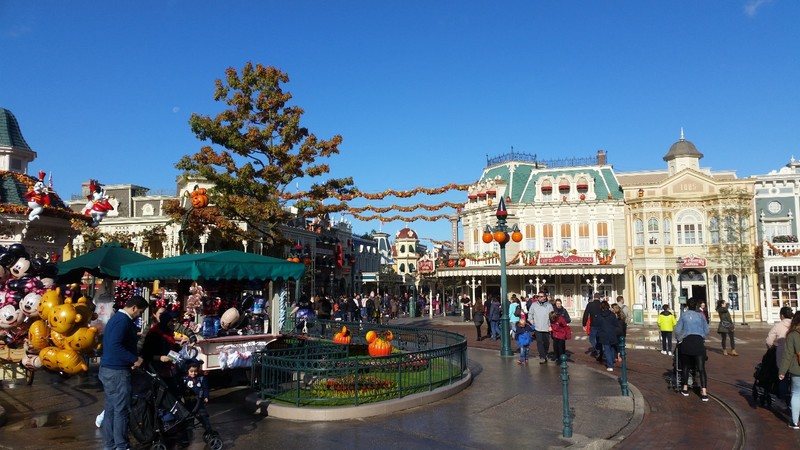 We arrived at Disney and the lines began. A line for security, a line to get in, a line to have your picture taken with a character, a line for the rides, a line for food, even a line for the bathrooms. Fortunately, I brought a book. While standing and reading isn't as nice as sitting, it's still an enjoyable enough day. And every once in a while, I got a reading break to go on a ride.
The rides are more or less the same as other Disney parks, but the Pirates of the Caribbean here speak French instead of English. The castle is Sleeping Beauty's instead of Cinderella's. It's smaller. But it's got the same teacup ride and same character-shaped waffles (I got mine Darth Vader-shaped). 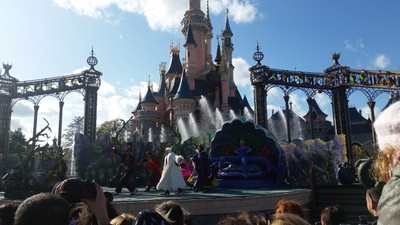 Our real adventure came on the Dumbo ride. It started. Whee! And then it stopped midair and we sort of dropped a few inches. An announcement was made to just stay there, as if we had a choice, and we were lowered to the ground. As unexciting as the ride is, I admit that I would be a little upset if we had waited 20 minutes just for it to break while we were on it. They started it up again, gave us a super-short ride, and kept on as if nothing was wrong.
Another difference is the I don't remember so many people dressed up last time I was at Disney in the states. Here, tons of kids are wearing character costumes and approximately 1/3 people have some sort of Mickey/Minnie ears on. I've seen them in every color of the rainbow, every fabric from sequins and velvet to plastic and knit, and with tons of different themes. Pumpkin ears are popular, but I've seen rasta Mickey, plenty of sorcerer's hats, and even ones spouting chipmunks.
Disney does know how to entertain. Theme musicians played at the lunch spots during lunch. We got caught in a parade, and we saw a show featuring a bunch of villians (half French and half English). For those of us who are a bit older and less entertained by the same song on repeat and dancing wheat, it was interesting to admire the craftsmanship and engineering that goes into it all. It was like watching a magic show and trying to figure out how they do it. 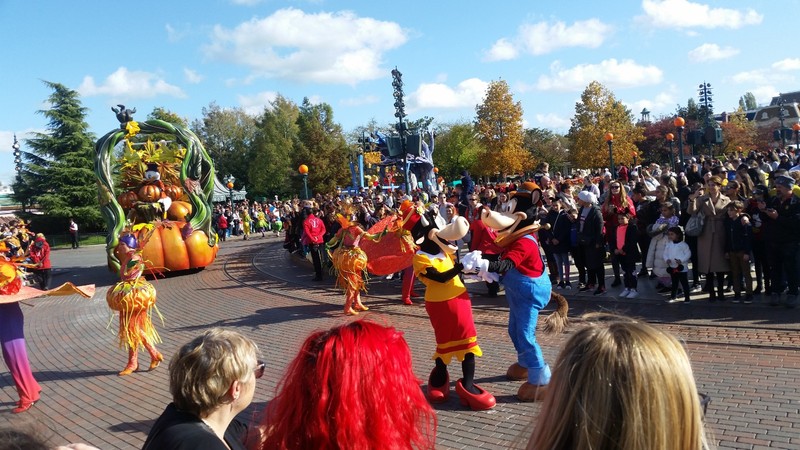 The only particularly bad thing was the food. I got a "Hakuna Matata salad" with zero flavor. I couldn't tell if the orange chunks were squash or mango, and they had the exact same flavor as the lettuce, onions, and peanuts- none.
We rode most of the rides, although we didn't ride the Peter Pan ride, despite it being #1 on my friend's list because the wait varied from 70 mins to over 110 minutes and she wasn't interested in it enough to wait that long. We also got our picture taken with Pluto and Darth Vader (who also speaks both French and English here). Here is one place where I feel this Disney excelled. You don't just catch the character and get a quick photo and autograph. The characters actually spend time with each visitor, hugging and dancing and teasing and having fun appropriate to the personality of the character.
I admit I didn't have high expectations for the day, but I had fun and came away satisfied. 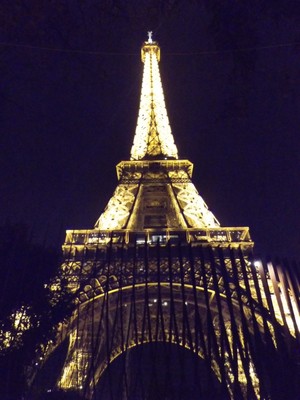 Once back in the city, we decided to check out the Eiffel Tower at night, as it was a 10 minute walk from the hotel. It is very different at night than in the day. They lit it up with lights that blink and sparkle and really make it stand out. It feels more decorative and fun at night, while during the day it seems more like a serious piece of engineering.
For dinner, I got a salad with goat cheese rounds and mustard dressing that would count as delicious any day, but compared to lunch, it was amazing. I'm not looking forward to leaving all of this amazing French cheese behind.

Posted by spsadventures 01:04 Archived in France