Since our tour left at 8, and the British are known for punctuality, I rushed through dressing, packing, and eating. The breakfast had tiny pancakes, but was otherwise an unremarkable hostel breakfast- toast and jam, cereal and milk...
We made it just in the nick of time, only to realize that the tour leaves at 8:30 and check in is at 8.
Fortunately, that gave me time to get a breakfast samosa and use the tiny restroom located in a back closet of the snack shop.
Today's tour company is Golden Tours. It's not really a tour, we're really just getting a direct ride to Stonehenge, an audio guide, and a direct ride back. It's an audioguide more than we would have received with the original company we booked, but it was also 10 pounds more.
The bus is nice enough, although the seats are a bit too reclined for back support. There are seatback entertainment screens, but not a lot of actual entertainment. I couldn't get the wifi working. But all was fine as I quickly fell asleep. They had given us headphones as a recording periodically told us what we were seeing outside the window, but I only caught one or two before I was out. At some point, I was vaguely aware of the recording giving us some sort of Stonehenge history, but after waking, I remember none of it at all.
I awoke just before the driver pointed out Stonehenge on our right and started giving instructions for how to take the shuttle bus to the stones, see the visitor's center, and get back in time.
It was raining. Not a light drizzle, but full on rain. Fortunately, the bus driver gave us ponchos with our audioguides, so at least the top half of me was dry. Between the ponchos and my umbrella, my lower legs were still wet, and rain was getting in my shoes because I was not smart enough to wear my boots today. My feet will be wet the rest of the day. 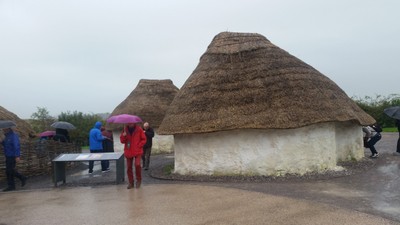 It wasn't supposed to rain all day, so we looked at the visitor's center first. It has displays showing the results of archaeological digs in the area and also some showing how Stonehenge was built in stages. Most importantly, it is indoors.
Even though it was out in the rain, I was excited to see their Neolithic Village. They have built a group of huts in the way they think the people of the time lived. The roofs are thatched and tall, but otherwise, they remind me somewhat of the Masai homes we saw in Tanzania.
Unfortunately, the roofs are thatched. One of the homes had a sign on the door saying that it was closed due to flooding. The others were also all locked up so we couldn't get in. 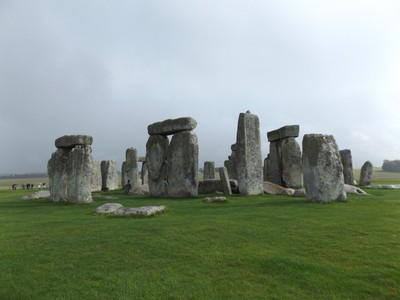 Even though it was still raining, we took the shuttle bus out to the stones. We'd just see Stonehenge in the rain. Juggling the audio guide, camera, and umbrella was a challenging task, but the audioguide really helped in understanding the stones. It explained a bit about how it was built, but also how it was restored. Despite looking so solid, the stones have fallen at times, and many actually have concrete supports in the bases to help make sure they don't fall down any more. What I also found interesting is that the ancients who built this (way before the Druids existed) used wood-style joins to keep the stones together. You can see the stone "pegs" sticking out of the top of some of the large stones where the lintels have fallen off.
Eventually, the rain lightened up. And then ceased. Unfortunately, I was on the wrong side of Stonehenge when the rainbow came out, so I have a picture of the rainbow, but not one with the rainbow AND Stonehenge as the rainbow had disappeared by the time I got to the other side. 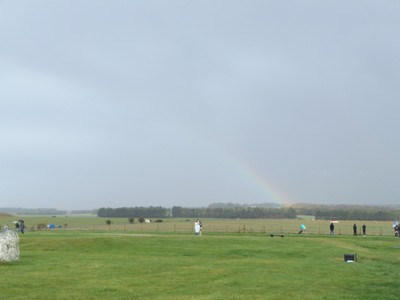 Now, birds started to flock to the stones as the sun started drying everything out. I packed up the umbrella and poncho and enjoyed Stonehenge in a new light. The stones are big, but the site is basically exactly what you get in pictures- no surprises. 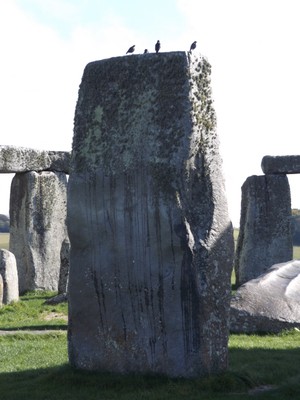 Once we had circled them twice and listened to the audioguide and gotten out of it what we could, we hopped on the shuttle bus back to the visitor's center. The ride is short, and the view is of the surrounding farms. It looks like it would be a nice place to hike, if it was drier and wee had more time. 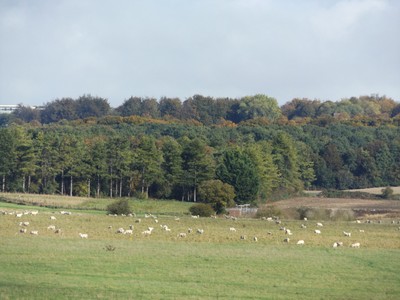 A guy in the gift shop was giving samples of some amazingly delicious products like raspberry butter, sloe gin, and Christmas mead. I'm kind of regretting not getting some to bring back.
We only had a few minutes for lunch at the cafeteria, and then we were back on the bus, right at the time the driver said to be. He waited 10 minutes, and headed towards London once more, apologizing for the wait. It is company policy, he explained, to wait 10 minutes and then leave, if people are late to the bus. It looks like 2 people got left behind and have to make their own way back.

Since we had a couple of hours before our train, we decided to tackle the British Museum. My friend got the map and headed to all of the highlights. I have been here before and so I just wanted to see a few items. I had started the Khan Academy Art History course, and several of the videos focus on items that are held at the British Museum. Years ago, when the British Empire was still in charge of everywhere, they ripped the walls off of a palace in what is currently Iraq. These walls and the palace guards are now in the British Museum, just waiting for me to come see. 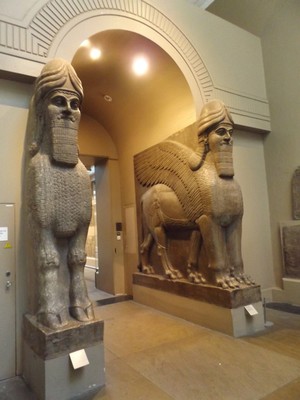 at the British Museum

Recognizing the controversy, in the middle of their Parthenon display (they also have entire walls), they have a brochure explaining it. More or less, they say:
1) The Greeks already have almost half the walls already, and they're on display in their museum, so they can't claim they don't have enough or that the walls need to be returned to the actual building they came from.
2) So many more people get to enjoy their shared human cultural heritage when pieces of the walls are in the British Museum and not just Greece.
3) They weren't stolen. They were taken with permission of the rulers at the time they were taken. And it's certainly not the fault of the Brits that the Ottoman rulers of the time were happy to give away others' cultural heritage. Imperialism was just how it was back then. The Brits didn't exploit in this specific case, a different Empire did the exploiting on their behalf.
While I recognize that a lot of the stuff in the British Museum was straight up stolen, taken during imperialist exploitation, or "gifted" by rulers trying to stay on the Brit's good side, it is still interesting to see the goods.
I didn't see everything I wanted to as some rooms were closed, but I saw enough to be excited and happy I came.
We grabbed our bags from the hotel to go catch our Eurostar through the chunnel. Just outside the train station, a small market had been set up. We had a full hour to kill, so I investigated and somehow ended up with a bunch of delicious cheeses, some bread, dried tomatoes, and pickled peppers. Surprisingly, when I asked the bread guys what they recommend to go with the blue cheese I had just bought, they suggested a raisin bread. It complimented the sweeter blue I got swimmingly, but I didn't really appreciate the stronger blue with it.
The train seats were big and comfy (especially compared to a plane) and I had plenty of room to spread out my picnic. But the ride itself isn't much in the dark. You can't really tell when you're going through the chunnel or not and there's no amazing view.
Upon arrival in Paris, we checked into our hotel and called it a day. Tomorrow, we'll venture off again.

Posted by spsadventures 00:57 Archived in England