I've seen most of Barcelona, so I wanted to get to Girona today. But in order to get back safely for my flight, I needed to be there early, which meant getting up early. I set an alarm, but went back to bed when it rang. It's really hard to get up before the sun while on vacation.
Instead, I found another free tour that goes to a different part of the city that I haven't spent a lot of time in yet. 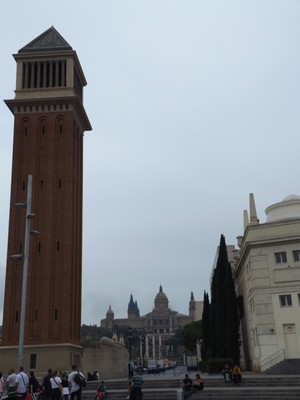 I checked out of the hostel and headed to the University area for breakfast as it's near where the tour starts. Not a lot of places other than bakeries were open, but I stumbled upon a restaurant called Garden of Eden, which looked a bit hippy-dippy, but had some interesting choices on the menu.
It turns out that apple acai juice is delicious. But their eggs Florentine were the best eggs I've had in my life at any restaurant. Ever. The base was some sort of spinach cream, but it was smooth and soupy. The egg was perfectly cooked and plopped into a waffle, which added a sweetness that I didn't expect at all. The crispy bread chips around the edges were perfect for scooping up the cream. And the tomatoes at the bottom added another dimension of texture and sweetness. Wow. If I had discovered these last time I was in Barcelona, I would have put forth the effort to travel to this part of town every day just for the breakfast. 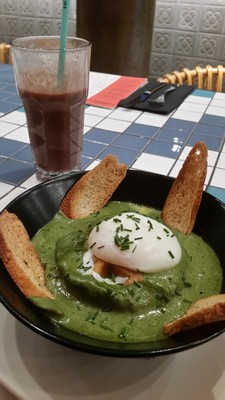 It was only a few blocks from the amazing eggs Florentine to Plaza Catalunya, where the tour was meeting soon enough. I sat for a few minutes on a park bench, just people-watching. (And pigeon-watching. There are so many of them here!)
Today's tour is with a company called CAT. I chose this tour because it was a bit different from the ones I had already done, at least based on their list online. It didn't disappoint. Yes, we visited a few sights I had already seen, but most of them I hadn't seen on any other tour. And anyway, the stories the guide told were different than the ones I heard before. 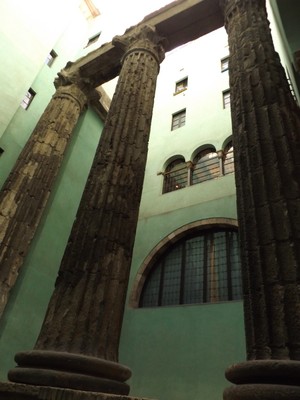 This tour focused more on historical Barcelona (Barcino to the Romans) than on more recent history. He covered the Roman times, Ferdinand/Isabella years, the Jewish expulsion, Colombus, and some of the Franco years. I had never seen the old Roman temple pillars before, nor would I have stumbled upon them on my own, and he took us there. I may have walked by the "expanding houses" before, but if so, I didn't understand why. 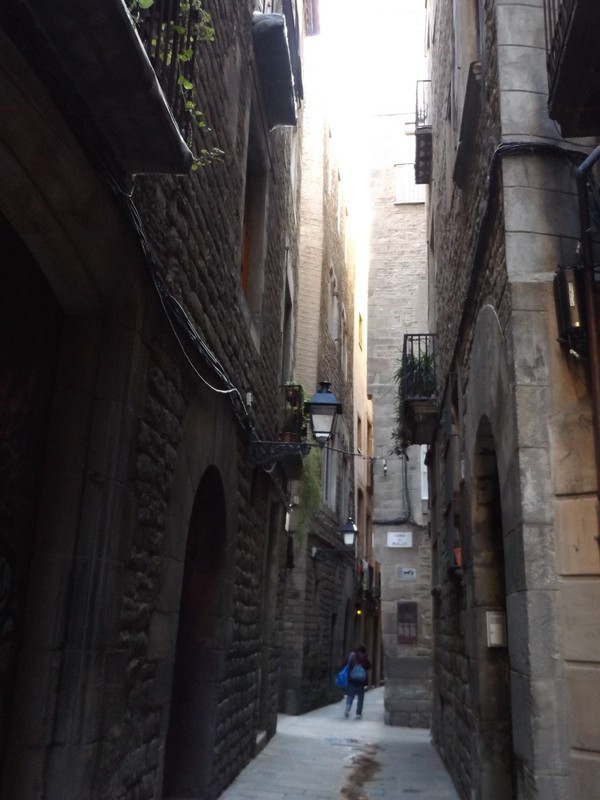 (Short version: the contract with the city said the buildings had to be built within a certain line on the ground. The builders made every floor a bit wider than the first so the side of the building looks a little like an inverted pyramid side. The loophole was that the containment line was on the ground, not in the air.)
Also, I hadn't heard that Franco gave the Italians and Germans permission to test their bombs in Barcelona against his detractors,even though I had been to the square that was damaged before on a different tour. 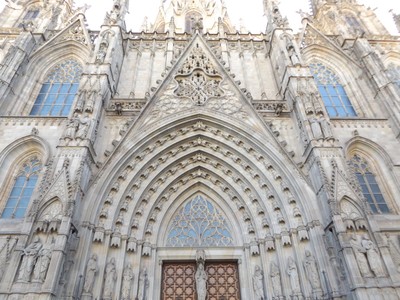 I learned a lot and the guide was good. I'd recommend the tour.
I also learned about what was going on in the news from the guide. I haven't been checking it at all. I'm on vacation. But apparently the courts ruled against the leaders of the Catalonian independence vote this week. Yesterday, the protesters shut down roads and even the airport for a bit. Our hostel is near the airport, and when I was heading back last night, there was a notice of "limited service" on the metro line to the airport, but it didn't specify what that meant, and I had no issue getting to the hostel, which is 2 stops before the airport. I did see extra police presence in the metro area, but not so many that I spent any time thinking about it. I did notice a couple of teenagers wearing Catalan flags as capes, but they were maybe 3 people in a large crowd, so again, I didn't realize anything was happening.
According to the news, people were walking to the airports because the protesters blocked other ways of getting there. Airline staff couldn't reach the airport, so flights were cancelled. Hundreds of flights were cancelled.
The guide knows a big protest is planned for Friday, and recommended that the people who are still around use that day to go see Montserrat or Girona. For today, nobody really knows what will happen, so he suggested getting to the airport early. Our hotel is actually within walking distance of the airport, but I'm not enthusiastic about having to haul my luggage, minimal as it is, the whole way. So, when the tour was over, I grabbed a quick lunch at whatever restaurant was near the metro and then headed back to pick up my luggage at the hostel. As of now, my flight is scheduled and on time. As of now, the metro line is running as normal. As of now, there's nothing on the news about any issues with the airport today. Let's hope all goes well and the flight leaves on time, or at least leaves.
...
So here I am, Miss "Airport Dash," at the airport almost 3 hours early with not much. There have been no issues at all, thankfully. But I'm glad I got here and I'm glad I have my kindle.

Posted by spsadventures 07:46 Archived in Spain