Today is my first day without my guy and the only full day I'm traveling alone as I meet up at the end of tomorrow with another friend.
I took this opportunity to get my laundry done in the morning. The washers are good enough that the honey spilled on some clothes totally came out. One run of the dryer wasn't enough, but I was antsy to get out, so I left the damp clothes to hang in the room. Either I'll get back to a bunch of dry clothes, or everything will stink horribly and I'll have to redo everything. Saga to be continued...
Breakfast at the hostel wasn't great, but it was decent for a hostel. I had toast with sliced cheese and a banana in hopes that it will at least carry me over to somewhere with something interesting.
I headed out in slightly damp clothes, but at least I was early enough that my 24 hour metro card still worked.
I was glad they dried quickly as it was a bit chilly on some of the trains, although the AC wasn't blasting like it is at home. I took the train to the Montserrat cable car, and just followed the line of tourists off the train. They all already had tickets and scrambled to get in line. I didn't and took my time to take photos, buy my ticket, and grab a snack before getting ready for a bit of a wait. They had clearly been warned where I wasn't. This line moves sloooooowly. 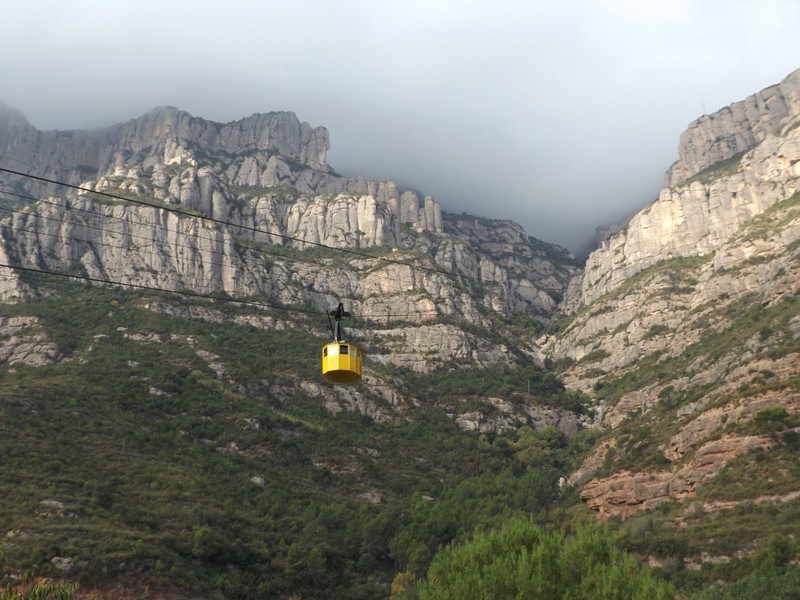 Each cable car fits about 30 people, but there are only 2 cars. They alternate- as one goes up, the other comes down. So you have to wait the whole length of the ride + load/unload time before 30 more people can get on, best case.
Once you actually get on, the view is great, weather permitting. The haze reduced some visibility, but I could see the forest stretch on for miles. Of course, you have just as good a view once you arrive at the top. And once I got there, I saw a funicular that must have taken a different route up, but certainly holds many more people. I'd recommend taking that instead. 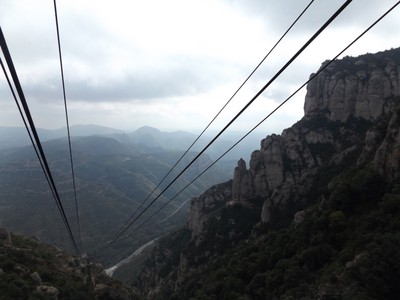 The area at the top was much larger than I was expecting. The church and monastery are only small parts of a large complex of tourist facilities. Since they were what I had come to see, I started by walking over to the church. 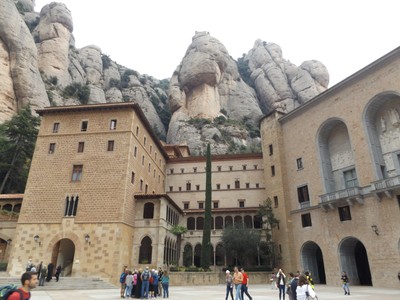 The courtyard wall decorations are intricate. I suspect that they were created using the sand-on-different-colored-sand method that the guide described to us yesterday. Other than the walls, the rest of the courtyard was typical for a Catholic church- white statues of the apostles, Jesus, and other Romanesque decor. 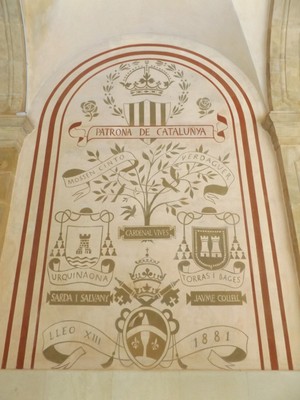 To the left, a small alleyway smelled strongly of hot wax. Upon investigating, it was obvious why. It was the place people bought and lit religious candles. About a dozen large stands contained at least a hundred burning candles each. The stone "grotto" had a few painted tiles near the stands of candles, and a winged statue that looked more like a Hindu goddess than any Catholic statue I've seen before, but was otherwise bare. 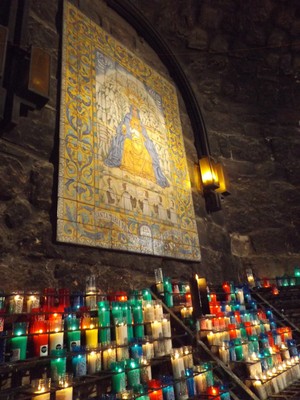 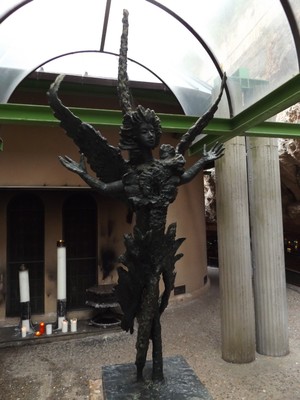 The church was closed for lunch or a prayer service, but that didn't stop people from standing in line to get in. I checked out the museum instead of waiting. 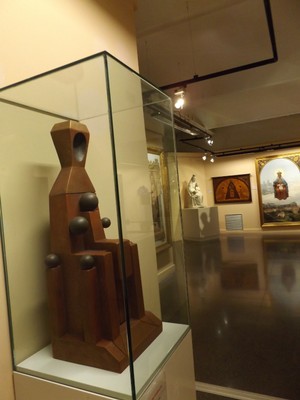 Modernist statue of Mary and Jesus

The Montserrat Art Museum is 2 floors of the lesser-known works of famous artists, mixed with Spanish artists, mixed with some seemingly random other stuff. Some sections made sense. They had a room with depictions of Mary with baby Jesus at Montserrat that showed how artists depicted her over the centuries. They had a room full of shiny religious icons. Many rooms contained the works of local artists, and we can see styles progress through time until we see the modern art, including funky yarn art. But I'm not sure what the Egyptian mummy or the Torah scrolls were doing there. The audio guide was helpful at understanding the individual pieces, but not necessarily how they all fit together. I also found that in some areas it was very short, while in others it was too long. Overall, the best part of the audio guide was when it told one legend of how Montserrat got founded. And I didn't find that any piece of art in the museum really spoke to me or stood out. The museum wasn't really worth the price. If you somehow had a 50% discount, then it might be worth it though. 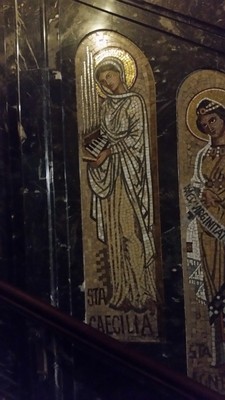 Mosaics to look at while we waited

Now that the church was open again, I went to stand in line. It was much shorter, but still a line, because they were only letting in groups of about 30 at a time. At some point, I realized that this wasn't the line for the general church, but for the black Mary statue. Fortunately, once we got let into the church, waiting in line became interesting. We passed through some elaborately decorated halls and stairways. One had mosaics of about a dozen female saints. Another area had an amazing ceiling. 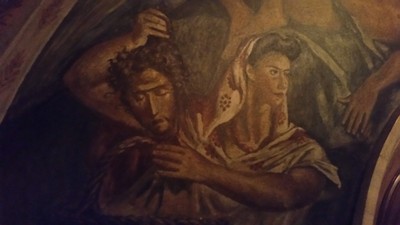 art during the wait

As we approached Mary, I could see the reason the line moved so slowly. As people got in front of her, they were kissing the glass case or saying a short prayer. Everyone needed their moment. 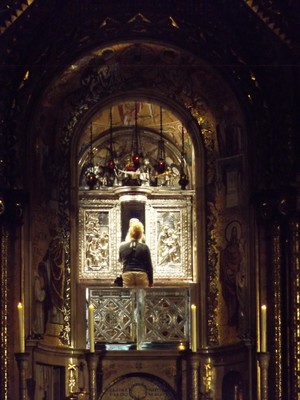 Having a personal moment with the Mary statue

She didn't look different than any other (blackened with soot) Mary to me, but I hope these people's prayers get answered. Also, we had a great view of the church from the Mary area as she is high above the main altar. 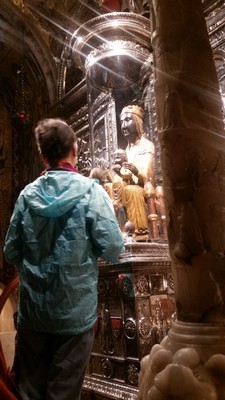 a moment with Mary

The way out after Mary takes you back through the candle grotto I saw before, and then you can reenter the church through the main doors. It's a typical Catholic church- every inch is covered in art. The stained glass windows were prettier than usual, but otherwise, nothing stood out compared to other Catholic churches. 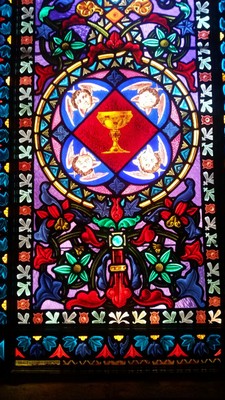 stained glass at the church

Because this is a huge tourist complex, there are multiple lunch choices. Most of them though, are cafeteria-style and didn't seem to have delicious food. However, the souvenir shops and one small grocery store do have tastier-looking food. I got a bunk of goat cheese, some eggplant pate, and breadsticks and sat down for a picnic outside. As I contemplated how different "goat cheese" can be (just like cheddar and mozzarella are so different even though they're both "cow cheese"), I enjoyed the scenery. The view from up here really is fabulous. 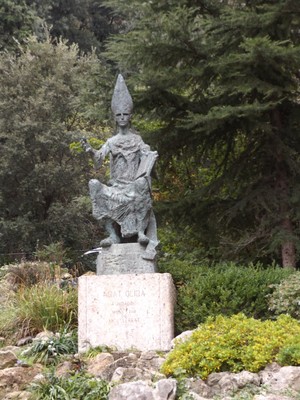 I ate by the statue

I wandered around the corner to see what else was up here, and almost slapped myself. I saw farmer's market stands, and I had just finished eating. I growled to myself and went to check them out anyway. I quickly went from upset to happy, as they stands didn't really have anything new or different. They all sold the same products as each other and as all of the souvenir shops- local honey, cheese, and dried fruit logs mostly.
Having seen what there was to see, I took the cable car back down. Unlike the way up, this time, there was no line. I think the secret is to take the funicular up and cable car down, at least if you're coming earlier in the day.
I walked the city a bit, keeping my eyes peeled for dinner. Even though it was almost 6 o'clock, almost no restaurants were open. I wonder how they stay in business if they have to pay rent for 24 hours per day, but are only open for making money 5 of those hours. A lot of them didn't open until 7:30, or later, which seems late for families to want dinner.
I found a Chinese restaurant that had just opened, and I have to say that it really hit the spot. It wasn't particularly spicy or flavorful, but the veg mix as just right and I was full enough.
Hours later, at the hostel, I would decide that my dinner was insufficient. I tried to get some hot water for my cup o noodles, and what an annoyance that was. The front desk told me to get some from the cafeteria lady. She said that she wouldn't give me hot water as the cafeteria is like a restaurant, but that I could buy a bottle of water and then use the microwave to heat the water. I took one of their mugs to the bathroom, filled it with free water, and microwaved it. Then I returned the cup for them to wash. It was a lot of unnecessary effort on my part to make more dishes for them. But if that's the way she preferred it instead of what the front desk suggested, fine.
On a side note, my clothes are almost all dry. The few items that are still a touch damp should be good to wear tomorrow.

Posted by spsadventures 07:43 Archived in Spain