I've been trying to get to all the restaurants on the island, one at a time. Recently, I went to Star Chinese, downtown Basseterre. The food was ok, but it was not what I'm used to in the US.

It's not quite a restaurant, but it is a food truck. Queen's Ice Cream truck is usually parked in Independence Square. I asked the guy serving ice cream what his favorite is, and he said "sorrel." I'm thinking sorrel as in the green herb and thinking that it's not going to be that great. In St. Kitts, what they call sorrel is roselle (hibiscus) elsewhere. It still didn't taste great, but it wasn't as bad as I expected. This week was a short week. I worked, got the house together, and went to the gym, which is moving from Sugar Bay to somewhere in Silver Reef. I also got to stop by Mrs. Richardson's, one of the other lunch places by work. This one has some seating, both table and bar, and has a restaurant-style kitchen where the food is made. It is also identifiable from the road as a food establishment, unlike Roy's. I got about the same amount of food for about the same price as I did at Roy's, which is to say that it is a good deal. I got more variety in the takeout container- rice and beans, lettuce salad, radish salad, mashed potatoes and roasted veggies, but it was mostly beans and rice. It wasn't bad, but I think I like the food at Roy's better. Since I went to Island Bakeries for breakfast (they have good breads popovers), I have now been to all 3 places up the block from work.

This week, I also learned a bit about the Kittitian concept of "open." I had been told that the place in town to go get a blank CD was Karibhanas, by the circle. I tried one day after work, but they weren't open. They close at 5, which in my mind, means they're open until 5. The next day, I went back at 4:45. They were already closed and there was a guy locking the door. I pleaded with the guy at the door to let me buy just that one thing. I'm pretty sure he only let me in because I knew what I wanted, it was at the front, and it was only one thing.

I'm also facing that with the book store. I went to a tiny store, that is better described as a stationery store, by Pelican mall. They sold less than a dozen different books. There is a place more towards the main road that is an actual book store. I have yet to catch it when it is open. I can't figure out what their hours are as they aren't posted on the door. They seem to be closed every day when I get off of work, and are more certainly closed on Sundays when I'm wandering around town.

There are some "businesses" that are open a lot. For one, there are always guys selling bags of sugar cane off the main road by the central bank. For 5EC, you can get a bag with a few stick of cane in them. One of my colleagues and I split a bag. Fresh sugar cane is pretty good. It's a little difficult to get the liquid out of as you have to chew it without getting all of the fibrous part too, but it's good.

Another thing that is "always open" are the trees. There are trees full of all sorts of tropical fruits all over the island. Many of the trees are free for the picking. One lady from work showed me where there are tamarind trees by one of the circles near Frigate Bay. She showed me how to tell which pods were ripe for picking and which ones weren't. It was very cool to be able to just walk up to a tree and get a fruit. 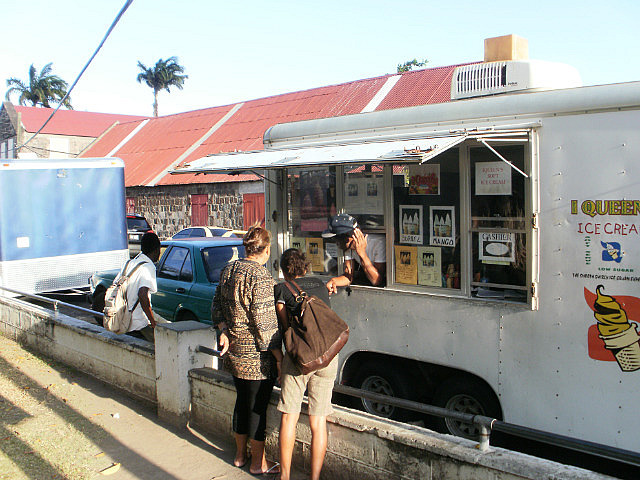