This morning, we got up early to have more time in Barcelona. As a result, breakfast came from a vending machine at the bus station. And unfortunately, this was not a French baguette vending machine. This one had carrot sticks with dip and chips. I miss French food.

The drive to Barcelona was pretty uneventful. We started in the dark and ended in the daylight, although the mountains blocked any semblance of a sunrise. We didn't have to stop at the border this time. And the roads turned from mountainous to just hilly, although we could still see the mountains off to the side.
The bus dropped us at the airport. We caught the metro to our hostel to dump our baggage and then caught it back to the center of the city. Last year, I had the most amazing olives of my life here. We decided to start at Santa Caterina market to see if I could find them again.
We found the market. But the market was closed. So much for that idea.
Nearby, we spotted a little restaurant with amazing looking pizza pastries, so we stopped in for our first real meal of the day. The pizza-looking things were more like soft French bread with toppings than actual pizza. They were delicious. The interesting part was that the restaurant also displayed tile coasters people could buy. They were supposedly made of recycled coffee.
After our snack, we started walking toward La Rambla. But we happened to pass the Picasso museum along the way. This time, the Picasso Museum didn't have a line out the door, down several blocks and around the corner. It was short enough that we decided to wait in it and visit the museum. 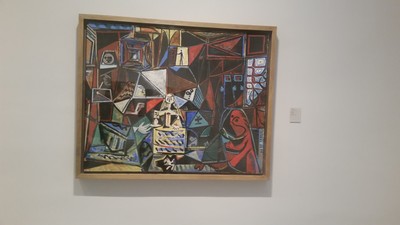 Painting I liked at Picasso Museum

The audio guide had great information and descriptions, although periodically it told us to look at its screen for something. The screen was about a square inch and impossible to see while listening, so that was a bit odd. I liked the early Picasso stuff ok, but it didn't really seem to stand out from anything of any other painter. The impressive part was that he painted these at such a young age- in his early teens. When the paintings moved to his blue period, they started getting different from other paintings. His pottery was certainly different than pottery I've seen in other museums, but more in a kids-that-made-something-at-camp way than a good way. By the end though, we could see some of his more famous cubist style. I found it interesting that they had 2 and a half rooms dedicated to his version of Velazquez's Las Meninas. He just kept painting the people in it over and over, both individually and as a group. His multiple versions of the same girl look somewhat similar, and yet are so drastically different from each other. In some, you could kind of guess what he was basing it on, others, not so much. But, I liked the shapes and colors. 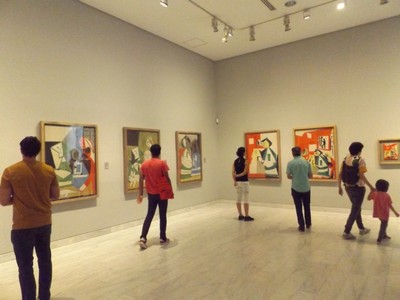 From the museum, we headed toward La Rambla, as I had only seen it sort of dead in the rain last time. But before we made it there, my guy saw some people at some restaurant's street seating with a pitcher of sangria. We stopped for our own. I made sure that we also ate while we were downing so much sangria. We got paella which was just ok. But, it was much much better than the paella I had last time I was in Barcelona and it was better than the prepackaged stuff my guy had cooked on the boat.
We finally made it to La Rambla. At least the portion of it we walked was empty of artists. Restaurant seating filled the areas around where people walked. It seems almost like the locals got tired of tourists taking over their city, so they spread a rumor that everyone had to go here, just to get the tourists concentrated elsewhere. We didn't see any reason to walk several more blocks, so we turned towards the Cathedral, where we were meeting our tour.
My guy had picked the Donkey Tour Modernism + Gaudi tour. Our guide was Eric, and he was amazing. He funnily explained the history of Barcelona (short version: it was small for almost 2000 years from Roman times to the industrial revolution, then more then doubled in size a few times in a few short years), and spent lots of time telling us about modernism outside of Gaudi. He answered questions well, looked at each of us when he talked, and had a ton of energy. He is working for tips, and I'm sure that's why he touched everyone's shoulders (some study showed waiters increased tips by friendly touching the diners' shoulders), but I thought that was a bit much. Still, he did a fabulous job and was one of the better tour guides I've had, paid or free. The tour was supposed to be 2.5-3 hours, but took about 3.5, which was a bit long without a good break. But he managed and I appreciated the bonus explanations. 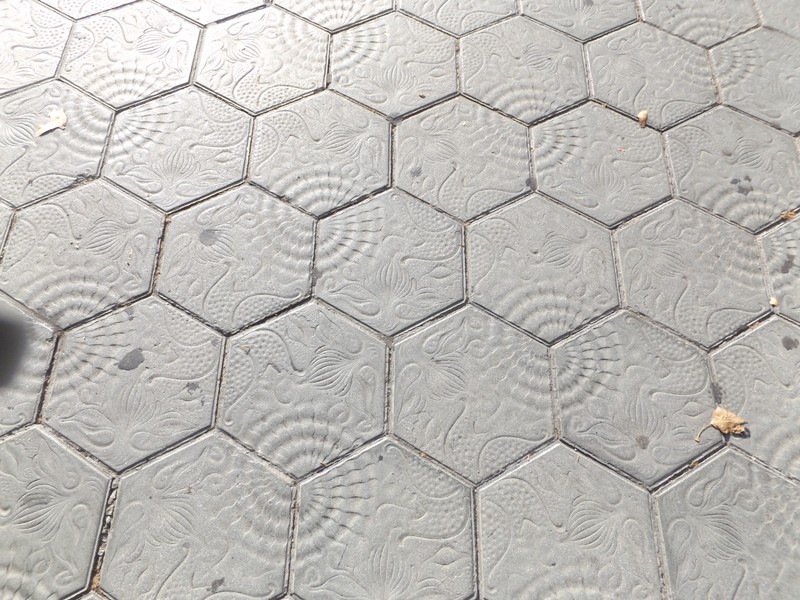 After learning a bit about modernism and the street decor, our first stop was a bathroom break. According to the guide, these are the prettiest bathrooms in Barcelona. They are in an old train station building that had taken turns as a newspaper, parking lot, and (currently) restaurants. 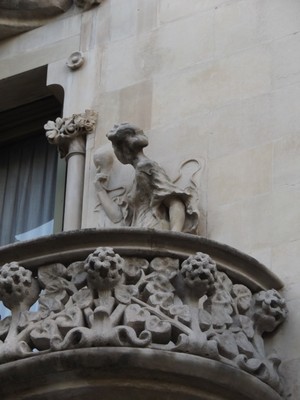 Next, we spent a lot of time on the "block of discord." Here is the block where the rich people started trying to outdo each other with fancy home facades. His description reminded me of The Big Orange Splot, where each home owner saw the other doing what he wanted and decided in turn to fix up his house how he wanted. Except instead of an alligator under a palm tree, a ship, and the Taj Mahal, we ended up with a house that has classic Greek statues holding electric bulbs and a telephone, a house that looks wallpapered (except the design is actually from a very expensive complicated process), and a dragon house. 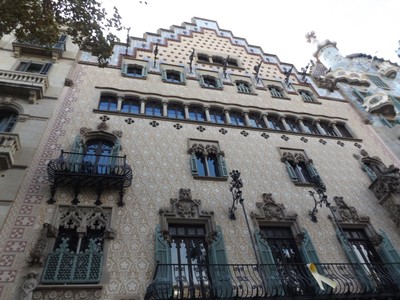 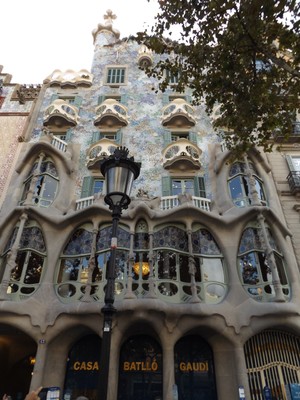 We spent a bit of time discussing La Pedrera (Casa Mila, which I had paid to go into last time I was here), and then we took the metro over to La Sagrada Familia. 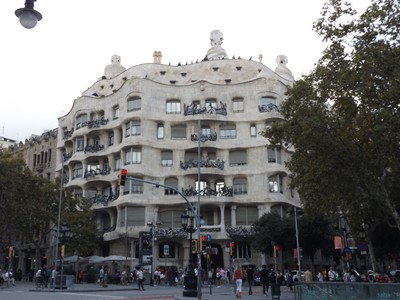 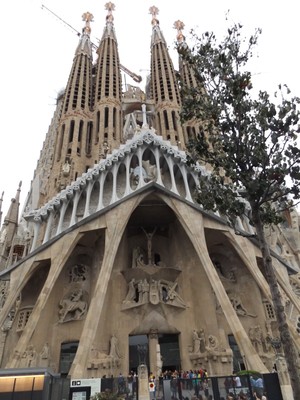 The group was dwindling as the tour was running long, but he had the same energy as at the beginning. When it was over, I got a dinner recommendation from him, and we headed across town to Bormuth. 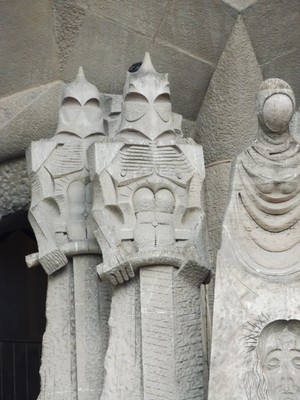 It was a good recommendation. They had a variety of small dishes that were somewhat bigger than a lot of tapas, but still small (and cheap) enough that you'd want to order at least 2 per person. The one that particularly impressed me consisted of crispy thin slices of eggplant in some sort of light honey drizzle.
We came back to the hostel (Esplai Centre Hostel to get settled in for the night (me) and get packed and ready to go (my guy). It's an interesting place. I'd guess it was originally a college dorm or maybe an athlete dorm for the Olympics. The rooms are rather large and everything is super-thoughtful. The quotes on the walls are in Catalan, Spanish, English, and Braille (3x, so I assume in a 3 languages). Our bathroom and whole room was wheelchair accessible. The AC doesn't work when the balcony door is open and the lights of course require a key card in order to turn on to save electricity. The toilets use a greywater system explained in a wall poster. The laundry machines even automatically provide soap. The dryer cycle is super short (10 mins) and does about as poorly as a normal-length dryer cycle (which is to say that you really need to throw everything in twice).
The only negative was that the shower doors and floor didn't touch and the water came out of the shower, but at least there was a sort of channel so it wasn't completely all over everything. It seems good enough.

Posted by spsadventures 07:40 Archived in Spain