I feel like we should be getting up earlier based on our bedtime, but I think the sleep isn't as good since the mattresses are hard and pieces of the bed that were pushed together keep moving. Also, the bed is too short for people our size. So we're spending way more than 8 hours in bed, but still waking up a bit tired and sore.
Still, we were up and moving before a lot of the other boats that were parked at Le Somail. Once we got through the town, I made a simple breakfast that we ate up top. I had cheese, bread, and the honey we picked up in the town by the abbey and my guys had scrambled eggs with veg and cheese and then some fresh veg and meat. Also the white wine we picked up yesterday, because we're on vacation and wine is totally legit for breakfast. 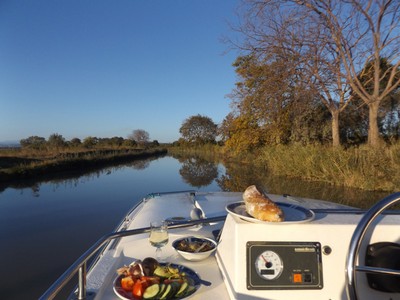 I got showered and dressed inside as he drove for a while, then popped back out to take some pictures. 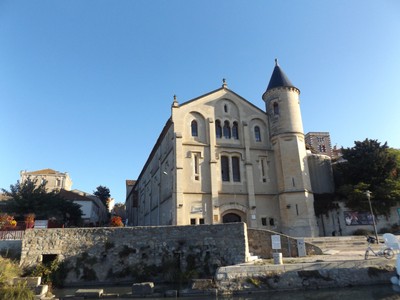 At the first lock, we switched and I drove. It's so soporific. The engine provides a white noise hum. The canal water laps a bit in a slow, calm manner. The scenery moves slowly, but doesn't really change. Vineyards roll by on one side as trees roll by the other. There are very few flowers to add any other color to the scenery and so far, in all 3 days of driving, I have seen 1 squirrel and only a handful of birds. There is nothing to break the monotony until you get to a town or bridge, which are few and far between. 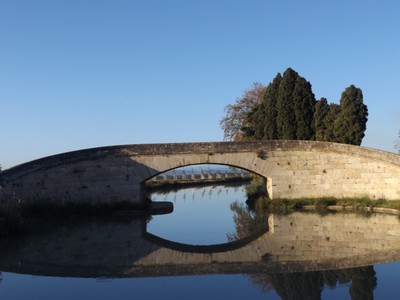 We passed through 3 of the 4 sets of locks before noon, but the 4th was closed for their lunch break when we arrived. We parked and took our own lunch break. I made the ravioli we bought at the Roquefort caves, but I couldn't really taste the blueness of the cheese. 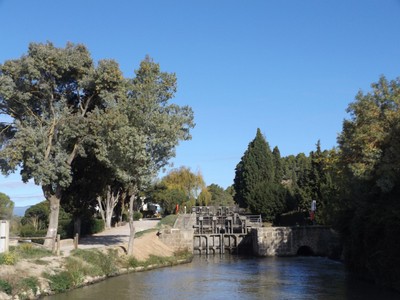 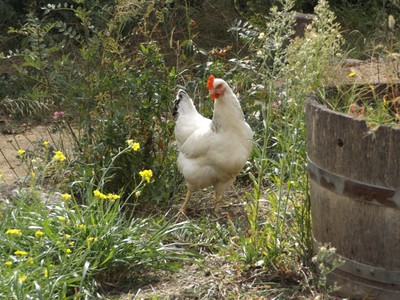 Chicken at the lock house

After a short nap, we passed through the lock and headed back towards the Le Boat Homps base. We were out of water and needed to stop in to fill up. It was easy, although it took much longer than expected. We suspect that we didn't start with a full water tank as it seemed that we were filling up way more than we could have used. It didn't matter too much because the fill up was free, but we got lucky that we ran out doing dishes and not showering. 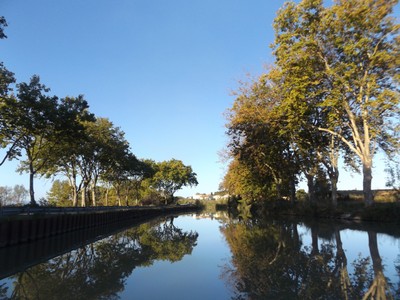 Since we had already seen what was to the east, we headed west. It was more of the same. We stopped just short of the first lock because we were finally going to get of the boat for more than 10 minutes and we needed to be on the Homps side of the lock. The boat is due tomorrow at 9am, but the locks don't open until 9. 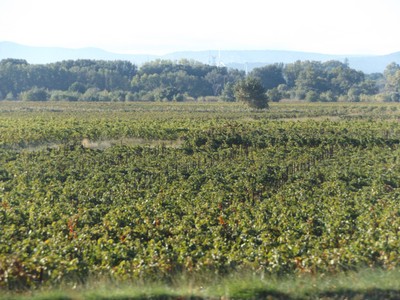 We hiked along the canal through the vineyards. I was surprised at the number of grapes still on the vines this late in the year. The ones that remained were mostly low down and half smushed, but the one I sampled was plump, soft, juicy and delicious. 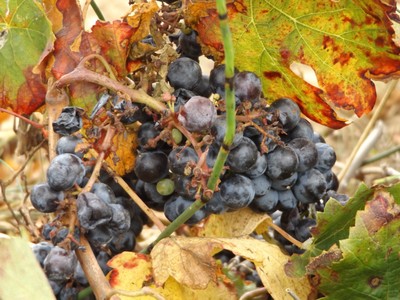 Occasionally, a small forest broke up the vinyards. I noticed a lot of fig trees in them, although none had any fruit on them. At one point, a forest blocked the path and we had to turn inward. We'd seen a lot of people biking and hiking the paths as we boated by, so we had assumed that the old towpaths just continued on infinitely. They don't. 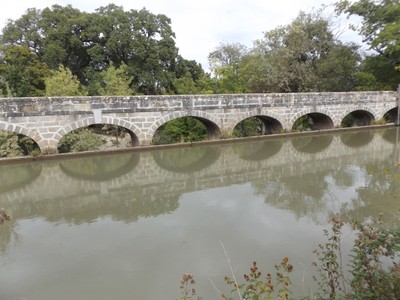 But we found the town anyway. The entire area smelled like grapes fermenting. We saw the processing plant where they were squishing grapes from the nearby farms, which was part of the source of the smell. But it pervaded throughout the town, far from the factory walls. 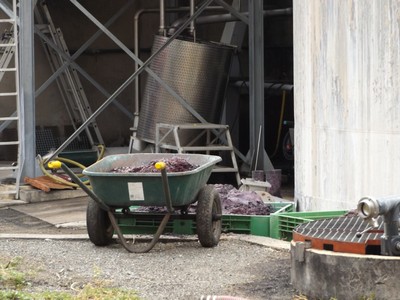 The town was cute, although like most of the other towns we visited, there wasn't a whole lot to do. I suspect that these towns would be crawling with tourists in summer, but this is the off season, and they're pretty sleepy.
We saw a boulangerie/patisserie, so my guy decided he was hungry. He picked out a croque monsieur and I got some chocolate-looking thing. He wanted it heated though. And my method of trying multiple languages didn't work. There was only one person working there, and she was very apologetic about not knowing any of our languages. I do happen to know what the word for hot in French is- chaud. But I only know it in written form. I have no ability to correlate letters on paper with the sounds that come out of French speakers' mouths. My best attempt at pronunciation was butchering the word so badly she questioned me with a very puzzled look as she pronounced it properly in French. Enthusiastically, I said yes (about the only French word I don't completely mangle), glad to be understood and get him a hot sandwich.
I can't speak for the sandwich, but my own dessert was good enough I want to try to replicate it at home. It seems simple enough- make a swirly meringue cookie, coat it in chocolate whipped cream, and sprinkle chocolate shavings on top. The taste belied the simplicity. It was divine.
The only other shop that seemed to be open this afternoon was the grocery store. We didn't really need anything, but we went in to check it out. At the deli counter, they had samples out for customers to try. Not really of meat though, they were "future food." Now I get that it's much better for the environment to eat insects than mammals, fish, or birds. But come on, at least grind them into burgers or something. The deli just had dried whole bugs on the counter. I was pretty grossed out, but my guy not only tasted them, but decided to buy a tin for later. The only thing I got was mustard, as I had leftovers from yesterday and saw a second chance to make it better.
Took the short way back to the boat and arrived in time to flip its direction and cook in the light. For my guy that meant I had to translate some directions on the back of a package. But I just had to reheat my leftover celeriac potato cheese dish. It was much better with mustard!
Since tonight is our last night on the boat, we got organized for tomorrow. The boat is due back at 9am, so we have to get up early in order to get everything done by then. We still had time for one more game of Carcassonne though, which I'm excited to see in person tomorrow.

Posted by spsadventures 07:31 Archived in France