We woke up with no alarm. Yay! Vacation!
After packing up, we made a quick grocery stop for breakfast at a Lidl. At the cash register, one of the people there apologized for the other workers, saying "Sorry. We only speak French and Arabic." I did happen to notice that a lot of the ladies shopping at the store had head coverings, but it hadn't quite occurred to me that we might be in a part of town with a heavily middle-eastern population. 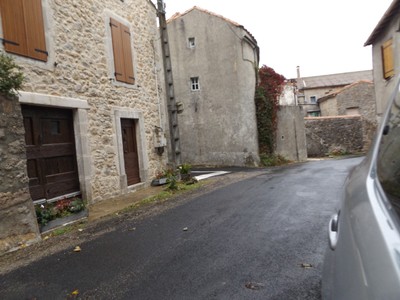 Today, we had decided to head to Roquefort, where they make Roquefort cheese. The drive had completely different scenery than yesterday. The mountains we drove through were craggy and rocky, as if pushed up haphazardly as opposed to worn down and smooth like the rock surfaces yesterday. The coloration was also different as they were darker and not tan. 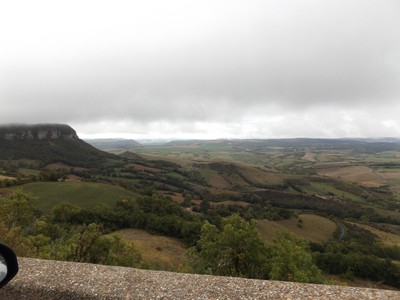 At some point during the drive, we had almost whiteout conditions due to mist and fog. It made driving along the roads that twisted and turned through the hills and forests somewhat challenging and I had to drive much slower.
Eventually, we reached Roquefort. I think that there are several different companies that do cave tours, but we ended up at the one near where we saw parking- Societie.
The tour is in French, although they gave us papers in English to explain each room to us. First, we saw a short video that explained how the caves were formed geologically due to some volcanic activity breaking up mountains and depositing rocks a bit haphazardly. As a result, there are long, narrow passages where the air continuously flows through the mountains. The "cheese masters" can block off or open these passages in order to control the air flow, which controls the temperature and conditions in the caves. There is no artificial air conditioning needed. We got to look up and down some of the air shafts.
We then visited an area where they explained a bit about the mold used. Roquefort uses a penicillin mold that they grow on bread and scrape off in order to dump into the (sheep) milk. It's fully mixed in so that it can be more evenly veined, as opposed to some other cheeses that just inject veins of mold into the already shaped cheese. 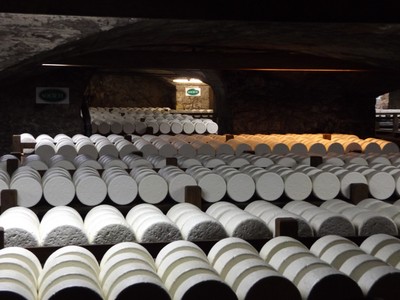 Since this is not the season they take milk from the ewes, we didn't get to see that process, just the room they do it in. But we did get to see the process of aging in the next area. They salt the cheese and wooden shelving and let the wheels all stand on their ends as they age in a big aging room. Since they have 3 different molds they use, it sounded like they had 3 aging rooms, although we only saw one.
Finally, the tasting! We were given 3 different products to try- one extremely creamy, one saltier, and one sweeter. Even though they were made with the same milk in the same facility, they were so different from each other.
As the car told us it was low on gas just before Roquefort, we headed off to get gas at the nearest open gas station (according to Google maps). It was 15 km away, requiring us to pass through a couple of surprisingly gas-station-less small towns. 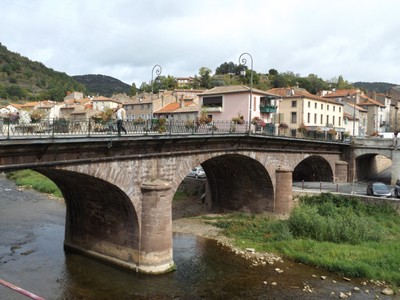 We ended up in St. Africa, which appeared to be a cute little town, so we parked and took a look. The town was small, and the roads that wound through it were pretty narrow, as we have been getting accustomed to in all the small towns here. Roads seem to pop up out of nowhere between two buildings. And there is rarely any "yard" or curb or ground space between the wall of the building and where the car is supposed to be on such roads.
We seemed to have arrived during their lunch time as not a single shop was open except for the restaurants. We tried to get a table at one, but they said that they were not seating anymore as they were about to close for the afternoon. We tried another and got the same result, so we ended up eating from our stock in the car.
In searching for a grocery store between us and Homps, our next stop, I noticed that some of them weren't open- probably also on lunch break/afternoon nap. But, we did find a full-size store to stock up on food for the boat.
In Homps, we easily found the Le Boat docking area and got all checked in. Our boat is a tiny housebarge, but I'm finding that it's plenty big for what we need. We moved all of our stuff to the boat, got some explanations from one of their staff, and then went out on our practice run. We experienced steering, turning, and parking before he let us go off on our own.
Good luck to us! 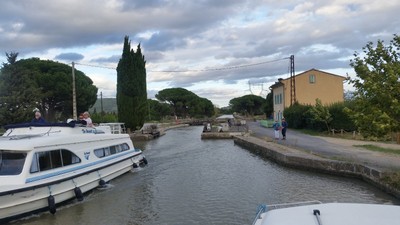 The day is rather windy, so the boat drifts a bit, but for the most part, it's not that difficult to steer. The real challenge comes when trying to fit into the locks. The openings are pretty narrow and you have to be lined up well ahead of the lock. At one lock, we had to move to the side in order to let someone out from the opposite direction. I think the lock master took pity on us, as he started yelling commands at my guy, telling him how to turn in order to get lined up so I could tie us up. 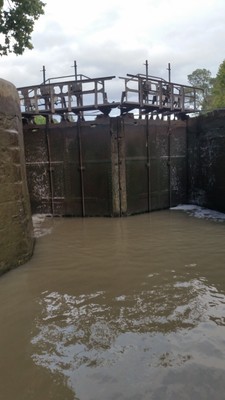 Going down the locks is a feat of 18th century engineering, but since everything is electronic these days, it seems pretty simple. The lock master just presses a button and the doors close. He presses a button and the water starts draining. He presses a button and the doors open. Done. We're on our way.
We made it through 2 locks, knowing that there were 3 between Homps and a long stretch of the canal without locks. We had been told that the lock houses were manned until 8 pm or something like that. Despite being earlier, nobody was at the 3rd lock. So, we parked in front of it for the night. We tied ourselves up to some posts at the side of the canal, and settled in. 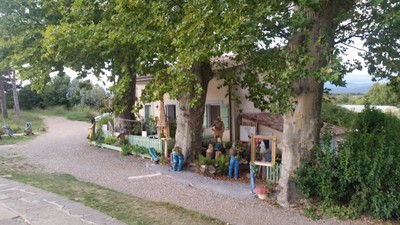 It's so quiet out here because we're not at one of the towns, so there are no people. Occasionally, we can hear a car pass by on the road, but even that's not regular.
The light started to fade as we set up for dinner, so we used the lights inside the ship to see. They aren't very bright, so we regularly found ourselves using our phones as flashlights. The kitchen comes equipped with dishes and basic cooking implements, although the knives aren't so great.
I was able to chop onions well enough though. Tonight, I made some not-quite-caramelized onions and threw in some blue cheese. It was delicious scraped up with chunks of bread. I also had salad. My guy made some sort of wine-glazed sausage. And we had fig jam with a cheese that looked like and had the texture of brie, but tasted nothing like it (much blander) for dessert. We were trying to use up anything that wouldn't hold well overnight as our fridge doesn't seem to be working. We're using it as a cooler, but we don't have ice yet, so it's just keeping in the cold of the food already have. We're hoping to get ice at the town in the morning, once we're past the lock, and also take advantage of the cold outside air at night.

Posted by spsadventures 04:29 Archived in France