I had fortunately read the reviews online for multiple car rental companies and so when we went to the counter, I was prepared. First, I made sure to get instructions on how to get a "vignette" for the car for Austria. Basically, you need a special sticker on the car to drive in Austria, and since we were renting in Switzerland, it only came with the sticker for Switzerland. (She suggested the gas station before the border.)
While I raised that point, she made sure to raise the point about damage. She showed me all of the places on the car that were scratched or dented and told us to check the car and come back if we saw something else.
In the poor garage lighting, we couldn't even find the ones she said were on the car, much less additional ones. I had heard that the Swiss were super-picky about rental car damage, and that was no joke. We looked at the car, but quickly realized we weren't going to be able to add anything, so we hopped in and were on our way.
As we drove past Winterthur and St. Gallen, I smiled, feeling as if I was in the middle of Ticket to Ride Switzerland. One day, I'll come back here and see the country by rail. For this trip though, we only flew into Zurich because it was cheaper than any other city close to where we wanted to be.

The sun set as we headed toward some snow-capped mountains, making them difficult to see. Still, I appreciated their presence.
Just before the Austrian border, we pulled off at a gas station. The thought was that we would pick up some food as well as the car sticker. We were successful at getting the sticker and I got some delicious cheese to go. My guy on the other hand, decided that he didn't want to pay almost $20 for a Buger King burger and fries. So, we got back on the road to look for another rest stop.
It was worth the wait. The next stop was the border again, this time Austria and Germany. (It was actually a very short drive through the corner of Austria, much of which seemed to be taken up by a long (~7km) tunnel. Here, the restaurant wasn't really open, but the deli/bakery counter was. I was actually ok, having noshed on the cheese I got at the last stop, but that didn't stop me from a cheese-covered pretzel anyway. And my guy practically drooled over the huge loaves of pork behind the glass. (Later he said they were just mediocre, but at the time, his face showed how excited he was to try them, and I made sure to get a great picture of that.)
We drove on, eventually leaving the highway for back roads that passed through adorable villages. I remember passing through villages like these between Vienna and Bratislava, and am really excited to be back to get a closer look than what I was able to see from the bus.
As we passed through numerous forests filled with super-tall, super straight trees, my Guy commented that Germans are so strict that even their trees grow straight. The forest just had a different feeling than where we usually hike because there wasn't a lot of underbrush or short trees or trees leaning, growing outwards, or near each other. There were neat clear spaces between trees that could be easily mistaken for telephone poles. Later, we'd see neat clean wood piles, both next to residences and on large trucks. 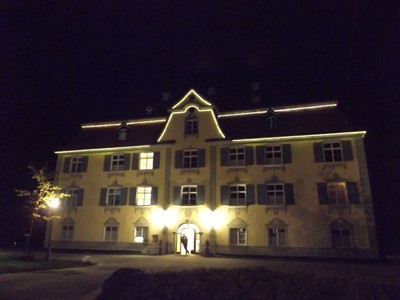 We arrived at Schloss Neutrachtberg- a castle- that is also where we are staying. It is not as large and grand as ShoenbrunnPalace, but it does bear a resemblance as a miniature version. Because we were arriving so late, the reception was closed. They had told me via ail how to access the key so we let ourselves in like we owned the place. It's a bit of a heady feeling to "live" in a castle, even for a night. However, the email didn't say what room we were in. And we didn't have a wifi password for me to connect and make calls. So we decided to just try all the rooms.
Our key didn't fit into a few doors, and quietly fit, but wouldn't turn in others. Fortunately, we were in the 5th room we tried, so we didn't have to try them all. 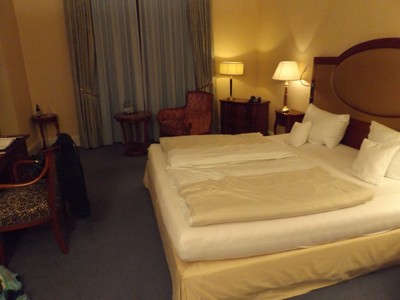 part of the room

The room is gorgeous, and is decorated in what is either well-maintained antiques, or really good replicas. Either way, I certainly felt like a princess or honored guest. I'm really happy that we chose to splurge a bit on this.

Posted by spsadventures 09:26 Archived in Germany