Today is another bus day.
First though, we had to take a cab to the bus station area, because we didn't really know how else to get there.
The drive started out normal, but then we hit some traffic. The traffic was so stopped up that vendors walked through the stopped cars, trying to sell items through the windows. They sold everything from bananas and candy to belts and car parts. One was handing out some sort of free newspaper. The driver took it and read a bit. The car was technically in park, so we weren't going anywhere. Still, it was a bit unusual for a professional to just pick up a newspaper while driving. 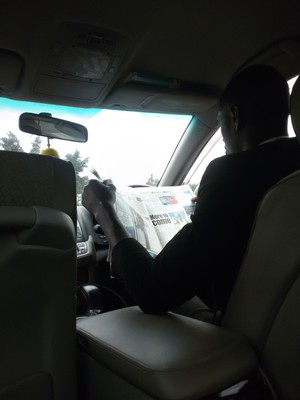 Eventually, traffic started to flow again.
We passed through the central business district of Nairobi and saw fancy stores, fast food, and even some of the government buildings.
We ended up in an area where both sides of the streets were lined with passenger vans. The car was going very slowly in order to not hit anything on its way through. Many of the vans had religious or inspirational names or quotes painted on the side. Some had pictures of celebrities or other people. Each one was unique. 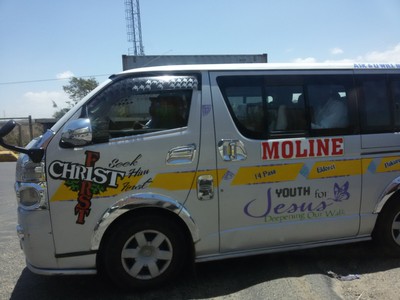 We exited the taxi near the Nulceur Shuttle area. (Yes, that's how they spell it. It's written like that on hundreds of vehicles.) This is one of many companies that run the shuttles, but this is the one we were told to use.
We requested a van going to Nyahururu, that would stop in Kasuku on the way. The ticket guy sold us our tickets ($5 each for a ~4 hour bus ride), and directed us to a van. We asked if we had a few minutes for breakfast or whether we were leaving now. He said we were leaving soon, so we rushed to buy something quickly and get back in the van.
But we needn't have rushed. They work like monit sheirut in Israel- they just sit there until they're full, and only then do they leave for their destination. As the bus filled, again, several vendors popped by offering drinks, kids toys, and handkerchiefs. I actually did buy a bag of spicy chips from one for ~20 cents.
Eventually, we were on our way to Kasuku.
We started in the city, but were soon passing lots of farmland and suburbs. This scenery is much greener than the Tanzanian scenery. The corn here is still growing, not all golden and dried. And the animals on the side of the road have much more grass to munch on. 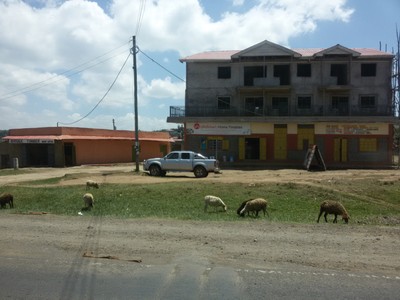 Outside of Nairobi, each little town had a cluster of cement buildings that we brightly painted. Many of them were bright green and advertised Safaricom (cell phone/mobile money). Others advertised milk, betting, or soap. In each case, the whole building acted like a billboard.
Most of the shops seemed to sell food, clothing, or other normal basic necessities, but I also saw quite a lot of Agrovets. I guess with the amount of livestock, vets play a pretty fundamental role in everyday life. 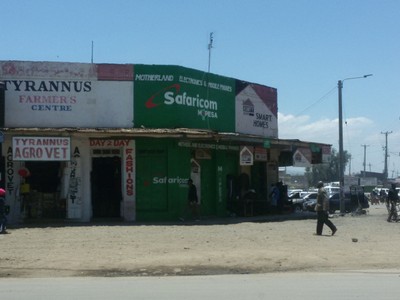 We were dropped in Kasuku and taken to the guesthouse by bodaboda. It's basically a small motor scooter that acts as a taxi in this area.
The guest house is actually nicer than I expected- it has electricity, hot water, a normal flush toilet, a fridge, and is filled with furniture. It was quite clean. It lacked a kitchen, but that's ok as our hostess cooked us some lunch and will be providing our other meals.
While we waited for our host to get off work, his brother took us out to the nearby hippo lake. Again, we took bodabodas as our form of transportation.
However, this wasn't a 2 second ride. This was a good 10 minutes. While they don't really go fast, and the road is dirt, so even if you fall off, it's probably not going to hurt too much, I still didn't particularly want to test that theory. The road is super-bumpy so I couldn't really just sit on the bike. It required effort and some amount of muscles to stay on as it bumped along the road. It's such a bumpy ride that my phone fell out of my pocket and onto the road. Fortunately, the next bodaboda driver saw and I recovered it. It's broken, but all my pictures are safe on the memory card.
We arrived at the hippo lake, which extended as far as I could see left and right, so it seemed more like a river than a lake. The other side was far enough away that the homes there seemed very small. A ferry boat waited for us in case we wanted to cross to see the other side. 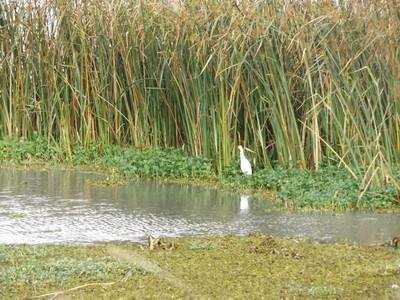 We didn't.
But we did want to see these hippos. Unfortunately, our luck with nature seemed to have run out. The hippos were not in a spot that we could see, even as we walked up the river a bit. We did see some cool birds though. 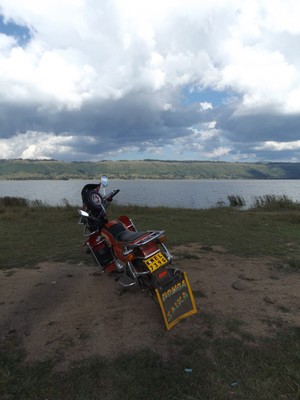 After our foray to the lake, we returned (by bodaboda) to the guest house for Friday night dinner.
First though, it rained a bunch. The rain was heavy, and I was glad we made it back in time to be indoors. Given that it's dry season in Tanzania, I was surprised. But here, it isn't really dry season and it still rains. I guess that's why it's so much greener here than Tanzania.
A bunch of kids were home from school for the holidays, so they joined us in the guest house living room for dinner. It was quite interesting that they all clearly felt so at home in the guest house. They would pop drinks into and out of the fridge. They would just come in and sit with us, watching. They didn't speak too much English, but I was able to at least get that one really liked math.
I was amused by the whole thing and was having as much fun watching them as they were watching us. My partner needed a little bit more space though, I think. I felt bad when we were ready for bed because we sort of had to kick them out in order to close and lock the door. But I didn't feel too bad, as I was sure they'd be back the next day. 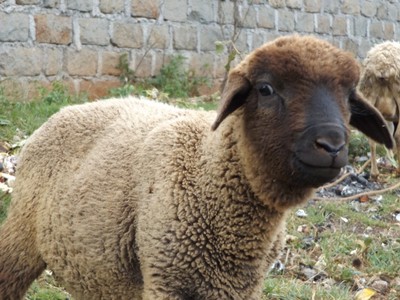 Posted by spsadventures 11:37 Archived in Kenya