We had booked the Riverside Shuttle from Arusha to Nairobi. We were supposed to meet the representative in the hotel lobby at 7:30, but he was actually early. So as soon as we checked out, he moved us to the bus stop to wait for the other passengers.
As we waited, lots of vendors tried to sell us some last-minute beaded jewelry, belts, and other items.
The bus filled up and took off.
The scenery was pretty much what we had already seen for a few days.
We arrived at the border station, and everybody had to get off the bus with all of their luggage to cross the border.
It was quite easy to exit Tanzania and enter Kenya. They did check our yellow cards and e-visas, but it was all in a reasonable amount of time.
On the way out, I noticed a board for money exchange. The rate for dollars depended on the bill type- as much as an at 18% difference in price for changing 50s vs ones. Bring big bills for the best rates, I guess. 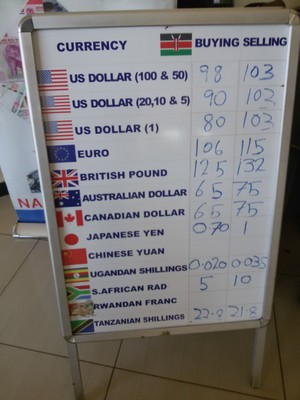 We didn't have much Tanzanian money left, but since there was no commission, we traded it for some Kenyan money to have some pocket change. As we got back on the bus, more vendors tried to sell us souvenirs, and I'm sure they would have taken whatever money we had. One guy started haggling over a necklace, but it never got anywhere, so the seller couldn't have been that desperate. 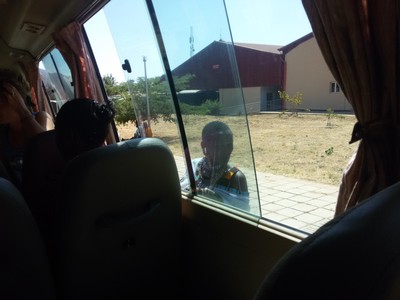 We continued on, but the scenery was a bit greener.
We still passed villages with brightly painted buildings, but as we neared Nairobi, the scenery became more industrial and suburban. Lots of businesses had signs that were professionally done. 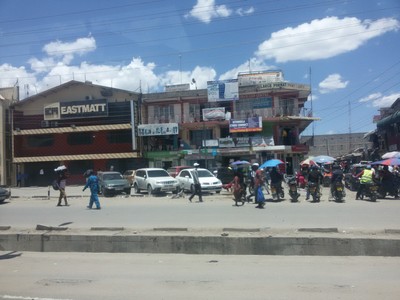 At the entrance to the airport area, we all had to get off the bus again and go through metal detectors. We didn't have to remove our luggage from the bus, but somebody checked the bus itself.
The bus dropped us at the airport, which was ideal. We were able to get a safaricom sim with a bit of data and unlimited whatsapp for $3. We were able to use the ATMs to get cash. And we were able to save on lunch by eating at Paul's Caffe at the airport instead of paying crazy hotel prices. The food at Paul's was better than most of the food we'd had up until now (except the Indian) because they use spices and sauces. The menu was eclectic, and while I wasn't in the mood for pizza, Japanese, or African food today, maybe when we're back I'll explore the menu a little more.
It's a short ride to the Four Points airport hotel. We're staying here because it's free (yay points I got from work trips). But it's really a good place to stay. They upgraded our room to a suite (with some free food), so we have a ton of space. I've lived in apartments smaller than this hotel room.

Posted by spsadventures 11:22 Archived in Kenya