A vacation from the vacation

I awoke barely in time for the end of the breakfast buffet and went back to sleep. The windows were open, so I was vaguely aware of the turkeys calling about the yard and a hiking group taking off on their adventure. Mostly, I was just passed out.
Some time around 1, I was coherent enough to get our stuff organized, return the borrowed gear, and get ready to move. I was still coughing. Since we had pretty much planned to spend a day in bed recovering, we decided to move back to the Four Points, which has comfier mattresses. On the way, the driver kindly stopped at a grocery store for us to stock up on supplies.
We got lots of soup, as well as some other items that could be made in a teapot. The prices were not cheap, but we were not going to put in the effort required for going out for food.
We got to the Four Points, checked in, and collapsed back into bed.
I spent something like 24 hours in bed, except to make soup in the teapot, shower, put lotion on my overblown nose, and use the restroom.
My cough is better, but still present. Also, I'm pretty sure I have bursitis in my heel, making walking less than comfortable.
On our last day in Arusha, we decided that we did want to see a tiny bit more of the town and get some food that wasn't soup. At around 5, we finally worked up the energy to venture out.
We headed in the direction of the central market. On the way, we passed some sort of rally. Boys tried handing us flyers, but we don't read Swahili. We made our way through the crowd to the center of the hubub. Apparently, the rally was run by an Islamic group and was in support of some martyr with Hussein somewhere in his name. The ralliers had black flags with Arabic writing on them and many were also in black t-shirts. I'm unclear as to whether they were rallying for somebody who died recently or were celebrating somebody from Koranic times. In any case, it was a peaceful rally that meandered towards the mosque. In the mosque parking lot, the leaders led chants and the ralliers repeated. 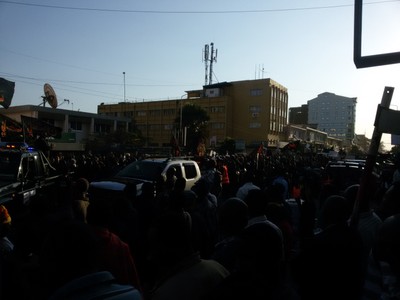 We moved on.
The central market is nothing like the Masai market in that is not at all for tourists. Vegetable stands lined the entrance areas. Other stands sold any kind of fly-ridden meat or fish you could want. Actually, you could also buy live poultry, which probably had fewer flies on it that the buckets of fish heads. Some stands also sold home goods like ropes, mosquito nets, and cloth. 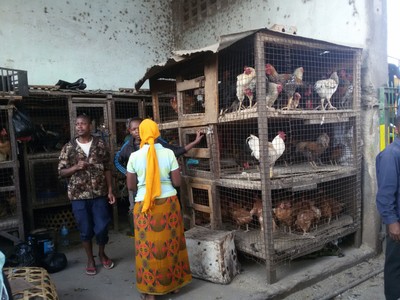 We wandered through a few aisles and then back out. Lots of sellers wanted us to step into their shops, bu we weren't here to buy, just observe.
I was surprised by the lack of ready-food vendors near the market. Usually, there are at least a few vendors out with their grills at places like this, but not really here. The surrounding businesses were also shops and not restaurants. It took us a bit to find it, but we stopped at Hot Plate, a well-recommended Indian restaurant, for dinner. It's small, but the food is really tasty. 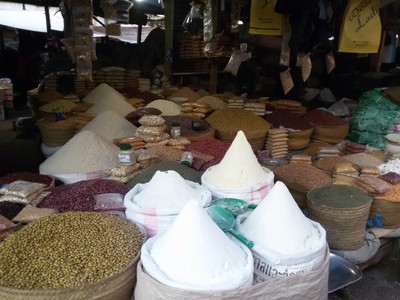 Posted by spsadventures 05:50 Archived in Tanzania