After last night's excitement, I woke up too early, but I used time to slowly and comfortably take a wet wipe bath and change clothes as well as try to process this whole trip. 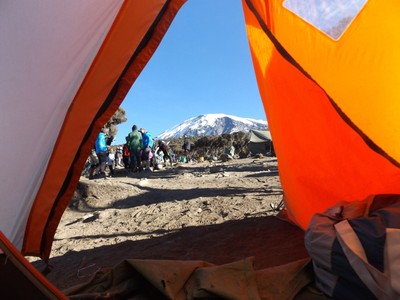 I did my research beforehand. All of the youtube vloggers say it's exciting and emotional and fun and wonderful. People we met before the trip who had done it before and gave us advice didn't say otherwise, although everyone says it's hard. They don't say some days can be torture. It's not that exciting except when things go wrong. It's true that there is nothing like the view- ok maybe a plane- but like Uluru, the view just isn't worth it. Also, I spent too much time looking at the ground to see the view most of the time anyway. Perhaps other people have different experiences and disagree, but I'm not sure that I'd recommend this to anybody. And I do think that if somebody came to me for advice, I'd make them ask themselves why they really think they want to do this.
I'm sitting here feeling pretty guilty for having suggested this trip that made my partner sick. I really just want somebody to come give me a update on how he's doing and then tell me that it's time to get the heck off this damn mountain so I can see him and shower.
Finally, we got moving. The path down started rocky, but today, I had a good leader. As the assistant guide was already at the bottom with my partner, I was given a porter to help navigate the path down. Gideon was a great navigator! He quickly realized that it was faster for us to take the rain channels than the stairs in many places. When he saw a rock that was on the path, he frequently kicked it out of the way before I got to it. We made excellent time without killing my knees or slipping.
Our time was so good, that just as I was about to ask how far to Mweka Camp (I expected maybe another half hour or so), he pointed out the signpost for the camp. We were there!
I took a rest break to remove the final warm clothing layers as the temperature was rising. But I was eager to get down the mountain, so it was only a short break.
After Mweka camp, the path became dirt stairs retained by wood, as it was on the first day. The hiking was easy enough that I was able to talk a bit with Gideon and GoodLuck and learn a bit about life in Tanzania and on Kilimanjaro.
One question I'd had for days, but had been too tired to ask finally got answered- how the rangers work. They do have to walk up the mountain to work, but then they are on duty for 10 days before they switch out and walk back down. Porters arrive with new food and supplies every 4 days. We saw some of those porters- they had the full 20 kilos of food on their head and had no backpacks as they were able to make their delivery and return in the same day. 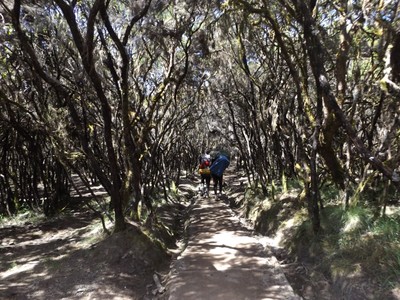 back in the forest

Soon, we had passed that section and were hiking along a dirt road used by rescue vehicles and garbage removal vehicles. I eventually got updated that my partner was doing ok and was back at the hotel waiting for me.
Since we ended the hike a day earlier, I got to see different groups than I did on the way up. One had something to do with breast cancer, and all of the porters and hikers wore bright pink tutus as a symbol of this. 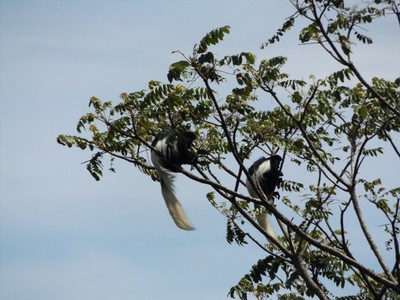 monkeys on the mountain

We met up with another Climb Kili group that had started a day before us and ended on time. Together, we went for lunch at a nearby picnic spot. It had a sink to wash our hands before we ate and I was so excited for that sink that I squealed with delight. It felt amazing to get the first layer of grit off of my hands. I'm seriously not sure I've ever been so excited to see a sink in my life.
Their chef made lunch, and made me truly appreciate how good King George, our chef, was. Their lunch didn't even have hot sauce, and the potatoes were so dry.
The music was good though. The store speakers were pretty much playing what I listen to at work all day- Despacito, Subeme la Radio, Echame la Culpa, Dura, and other Spanish hits. Some drunk guy with a guitar was playing over the music while we ate though. He played both American pop songs, as well as Swahili classics. 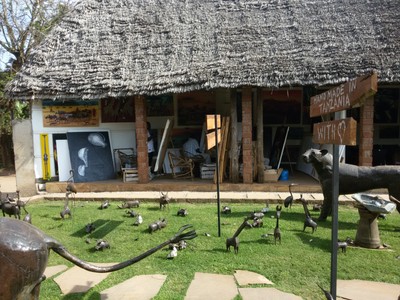 The location had wifi, so I could update my family on our progress. It also had a large store full of stuff for tourists to buy and took credit cards. Three artists were on-hand, painting art for the store in a little studio. The yard contained metal statues for purchase. One was a life-size giraffe. I'm not quite sure how you transport that one home. The guys from the other group shopped while I just sat at the table, relaxed. I was still coughing, but otherwise completely calm.
We loaded back into the van and continued on our way back to Arusha. A couple of times the driver got out to check something on some of the wheels. And then he pulled into a gas station. 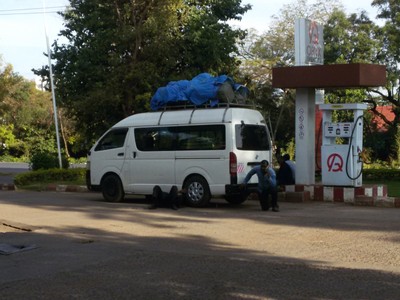 Something was wrong with the brakes (I think). Several guys got under the van to check it out and make repairs. I was impressed with how quickly the vehicle was attended to. We were in and out in about a half hour.
We got back on the road again. The conversation was good, and the drunk guy played guitar in the van, but by the time we got anywhere near Arusha, I was starving. The sun set, and we were still in the van, with no hotel in sight.
Finally, we arrived. I was so hungry and physically tired/sore and dirty that I just wanted to eat pizza while showering and collapse in to bed.
But, first things first. The porters and crew had taken extraordinary care of us on the mountain. In addition to the recommended tip, we wanted to give more. We had heard that most of the crew buys about 65% of their gear and has the other 35% donated. (Btw- everyone has shoes and this is checked by law at the entrance. We had heard stories of barefoot porters, but hadn't seen any. This seems to be old information that porters go barefoot.) We had already donated our headlamps in the effort to get my partner down the mountain in the dark. But we also had a camelbak and some gaiters we won't use, so we donated those. Additionally, we had seen in the book that we could hire a porter to carry our daypacks for $100. We didn't do that ahead of time, but I didn't carry my daypack for most of the hike, so we wanted to tip for that as well as the rushed descent they brought my partner out on.
I didn't have extra cash (which I'd need anyway for later), but the driver was happy to take me to an ATM. The max it gave was 400,000 Tanzanian Shillings, but I was able to use it twice. When I gave the huge stack of bills to the guide (he divvys it up amongst the crew) he thanked me. Then, he turned to the remainder of the crew that was in the van, held up that, plus the basic tip and gave some sort of pep talk in Swahili. All of the guys were saying thank you and shaking my hand. I was thanking them because this adventure would not have been possible without their incredible support.
I showered and went for the dinner buffet at the hotel. It wasn't amazing, but compared to the mountain food, it was great. I ate curry and pasta with spices. It's amazing what a few little spices can do.
We chatted and compared stories with the other guys who had just come down the mountain, as well as went over advice with a hiker who was headed up the following day. But I was exhausted, and couldn't stay up too late. Bed was calling my name.

Posted by spsadventures 05:48 Archived in Tanzania