Kilimanjaro Day 5- coming back down

This was what I wrote in the journal as my goal in the morning:
It's day 5 and I still have this ugly cough. Everybody is worried about it and so am I. My nose is running and I'm phlegmy and I don't feel good. Since I don't feel like I have a fever, I'm guessing it's just from breathing in all the cold air. Even if summiting isn't in the plans for me, I'd at least like to get up to 5km altitude before turning around.

This morning, we pushed the guides to get us out of camp earlier than usual so that we had options for summiting.
The first part of the path was pretty flat and I actually did quite ok at it. There were a couple parts that were more like the Barranco wall and needed 3-point contact rock climbing, but they were short and spread out. One part was just a rock field and every step could cause a small avalanche. I was super-nervous about slipping there.
In general, the whole way up, the paths have been more like converging and diverging river streams. There is no specific marked path to take and everybody takes what works for them, passing as needed. I tried to take routes that were safer and less likely to cause slips. While it was slow going, it worked for me.

My partner needed to go faster though, so we split up. The plan was that he would get to Barafu, eat, and then push for the summit before sundown. Usually, people sleep at Barafu and push for the summit in the middle of the night to get there for sunrise. But he was confident that he was not going to be able to sleep at that altitude, so there wasn't a point in waiting to summit.
I was going to get to Barafu, then see if I could get to 5km high, and then head down to Millenium/High camp to wait for my partner. It is at a lower altitude and he would be likely to be able to sleep there. Then, we would exit the mountain a day early as we didn't need to stop at Mweka Camp.
By the time I got to Barafu, I was exhausted. In the pictures, I am literally being held up by the sign pole and struggling to hold my head up. Getting up to 5km with this cold was just not in the cards for me. I logged into my highest and last station before heading to our camp.
I napped and ate, and while my oxygen level was ok, my heart rate was not. Even after a nap it was beating fast. I felt like I was back in Budapest, where I damaged my heart muscle caving and just couldn't get it to calm down.
I was proud of having made it this far with a cold. 4.7 km altitude is no joke. But I'm also not convinced that it was really worth the trouble and misery. Maybe it's like Uluru- I can't recommend it, but I'm not upset I went.
I left Barafu and made sure to tighten my boots so as not to slide too far forward in them.
We descended through brown dusty dirt, but as the path was less rocky, we made good time. Eventually there were plants up to my ankles and then my knees- those same yellow flowers we saw on the way up. I don't know if this descent-related or not, but I had a serious case of the burps the whole way down.
On the way, the assistant guide kept me updated on my partner's progress. I heard he was halfway, then at Stella Point, then going for Uhuru Peak. I was really glad he was going to make it. It's a bit ironic as I have strava proof that I did way more training and started earlier, but I'm just really excited for him. 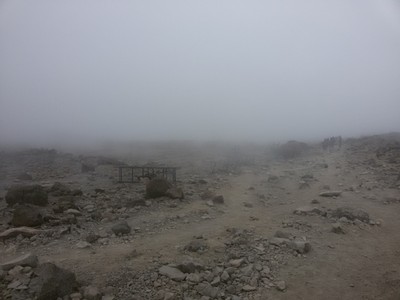 We passed a pile of carts lying by the side of the path. I asked the assistant guide what they were for. He said that they are stretchers, used when people need help getting down the mountain, but don't want to pay for a helicopter. To me, that sounded crazy. Why would you spend upwards of $4000 on the hike, flights, tips, and gear, and then not spend the extra $20 for the insurance that will helicopter you out?
Then, I could see the Millenium/High camp, where we had altered our plans to stay tonight. It is lower than Karanga and has lots of trees, some taller than a person, so there is better oxygen and we hoped my partner would be able to sleep well here.
I feel better already. I'm glad it's our last night on the mountain- no more diamox, no more confusion as to what symptoms are related to altitude or cold or something else, no more dirt, no more sleeping on the ground with limited ability to move my legs. Hopefully, this cold will go away as well. I had thought it was cold and altitude related, but according to the guides, that is not normal.
They helped me dust off my boots and pants at camp, as I waited in the food tent. It was just too much work to climb into my sleeping tent, and so I relaxed in the dining tent for a bit. I sat there drinking hot honey water and listening to some guys listen to a soccer game on their radio. I watched some birds hang out near a tree that was gnarled into looking like a cartoon dog face with a bone. I heard some helicopters overhead, clearly on rescue missions. I tried to shake the diamox pins and needles out of my feet and burp up the rest of the heartburn. The guys brought me some popcorn to snack on, and I actually ate some as I reflected on this trip.
I've been banned from planning family vacations and was told that next vacation we do something relaxing.
I'm glad we went with a private group. If we had been part of one of those big groups, I would have been done on the first day. For a while we weren't excited about the lack of info sharing about plan b, which may have been language barrier or may have been professional experience. (When we got to Millenium/High camp, I noticed that there was a cut across from the Karanga camp listed on the sign.) In the end though, when we were adamant that my partner couldn't sleep at Barafu and wanted to summit, they woke everyone up early so we got out early and he had time to summit before dark. They set up a mini camp at Barafu for us to rest and eat, then tore it down and moved to Millenium/High quickly. They really pulled together for us and we appreciate that. 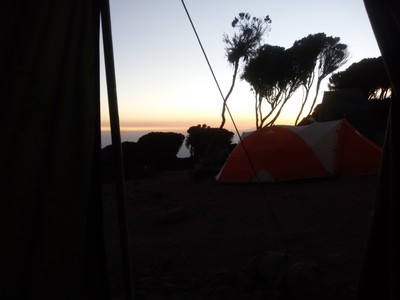 I ate dinner around sundown, and then started to worry about the guys coming down in the dark. It could be dangerous. Also, it was getting cold and I saw that they hadn't taken the winter coat- probably because you don't need it in the sun to summit. But in the dark, you would. I hadn't heard an update in a while and was also worried about the lack of information flow. The assistant guide said that they were all out of batteries, so I gave him some of ours and continued to wait for news. He said maybe the guys coming down were out of batteries, but that I shouldn't worry.
Running out of something as important as batteries 2 days before we were supposed to be done did not inspire confidence. I asked what time we should expect them, and was told 8, so at least I had something to work with.
I read in the tent until 8, then 9, then 10, before deciding that sleeping was going to be best for my sanity and best for my ability to function. There wasn't a whole lot I could do at this point anyway. Besides, I could hear the crew still up, which meant that they were alert and ready.
At around 1am, I was awakened and told that he had made it to camp. Good. I said he should come into the tent. But I was told he was at the ranger station. I popped right up and rushed over, although it was a slow rush, as I was still winded easily.
It turned out that he had gotten some altitude sickness during his push for the peak and ended up needing some assistance and oxygen in order to get down the mountain. Even though it was dark, they needed to get him off the mountain quickly in order to avoid further escalation of the problem. Ironically, even though we had the nice insurance that covered helicopters, they couldn't land at night, so they were going to have to help him down the path anyway.
We got out the good winter coat and gave the porters our headlights, which were an order of magnitude or more better and stronger than theirs, and they all set off down the mountain.
I would have just been in the way and made them go slower, or else I would have wanted to go with them. Instead, I had to get back to sleep. The one benefit of being fully awake at 1am was that I got a good look at the stars. I hadn't done so on the mountain yet as I went to bed before they were fully out or I was rushing to the restroom in the middle of the night and not paying attention to them. Like in the Serengeti, there were a lot of stars.
How do you sleep after that kind of excitement? I crawled into the tent, snacked, and promptly had to pee. I then got as settled as I could and waited for morning so that I could leave and see how my partner was doing. Of course, the best way to kill time is sleeping, so I did.

Posted by spsadventures 10:00 Archived in Tanzania