I woke with the light, sound of tent zippers, and rumble of voices.
Again, everything was covered in frost. Today, that included my partner. Even at home, he will open windows during the winter in order to get sufficient air flow. Here, he felt suffocated by the tent. So, he popped his head outside and slept like that. 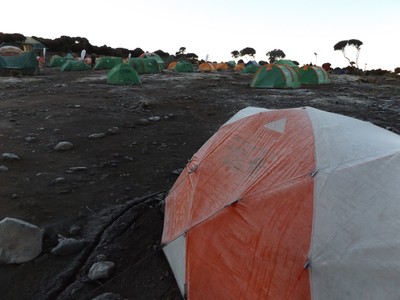 I woke hungry, which is a good sign of acclimatization as this is about the point where people start losing their appetites. I'm not sure how much non-egg protein I'm getting from the peas and green beans in the veg here, but I brought some tofu jerky from Taiwan and that has made me feel good.
Other small things that make me feel good: baby wipe showers, changing out of my gross clothes and walking around camp basically in pjs, stretching, and brushing teeth. My suggestion for ladies- don't have your hair out to collect the dust. You'll likely feel better in a braid or something that you can set and forget.
I ate too much at breakfast and didn't feel great at the beginning of the hike, but by the time we were an hour from lunch, I was ready for a snack.
The hike started out with plants that came up to my knees and a smattering of trees as tall as me. Later, it turned into short plants in a field of rocks. For me, that's a difficult path as I really don't want to slip and fall and break/sprain/twist anything. 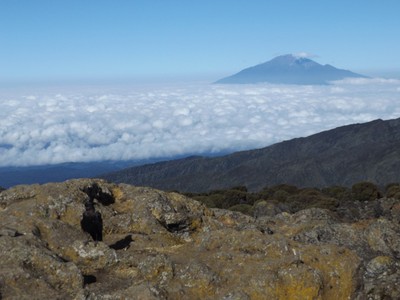 The rocks looked really awesome though. They were covered in a lichen or short moss so dark red that it looked black. Then, dangly orange moss grew on top of that, making it seem like the rocks were dripping fire. 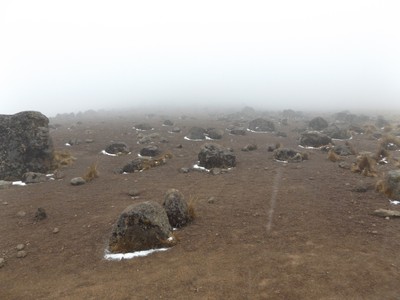 We started seeing patches of snow on the ground. Then, it started to flurry, which was cool. Then, it started to really snow, which required putting on the rain gear. We trudged through the snow, trying to reach the shelter that awaited us at lava tower. September is supposed to be the dry season, where it doesn't really rain, but now we had serious precipitation 2 days in a row. When they tell you that the weather is unpredictable, they mean it.
Finally, we arrived at Lava Tower Camp (4.6 km altitude), where food and a restroom was already set up for us. I had no appetite, but ate what I could.
You think today is an easy 10k as the total altitude change from camp to camp is only 100m, but first, you climb to the Lava Tower and then you climb down. It's good for acclimatization, but makes for a rough long day.
We waited out the snow along with another group. When it stopped pouring snow, we headed downhill and passed them. The path was narrow but smooth, so I was making good time. But then the path turned rocky and I know I'm slow, so I sat aside to let them pass. When I got up, my pants ripped on the rock I had been sitting on. (Fortunately, the guys duct taped it back at camp.)
We continued downhill and uphill, crossing streams that were flowing with fresh rain (lower elevations had rain and not snow.) Again, I was trying really hard not to slip. The trail was rocky, uneven, and now wet and muddy with little water flows. I kept thinking of my little sister telling me how stupid of an idea it was to go hiking in these conditions, and was extra careful.
We saw some really cool plants on the way down to the camp. At the time, I was too focused on the path to have noticed them without the guides pointing them out, but once I stopped to "smell the roses" I was glad. The guides identified them as giant sinessia, robellia, and Erica arborea.

By the time we arrived at camp, I was miserable and almost unable to hold my head up. Everything hurt- my neck from looking down at the obstacle-ridden path all day, my head, my esophagus (I had some sort of acid reflux that Tums did nothing for), my legs, my arms, my palms, my brain. And of course I had a runny nose and bad cough to top it off.
I headed straight for the hot cocoa and barely touched the food. After food, I only felt slightly better, and started asking our guide about my options. I wanted to know what sites you needed to helicopter out of, what sites had cut overs to the exit path, and how to know when it was time to give up.
I'm hoping that tomorrow I'll wake up having forgotten about today. I know my mental faculties aren't 100% and I'm concerned that will cause me to misjudge a step and then twist/sprain/break something. At this point, my goal is to get out on my own 2 feet- no helicopter or stretchers. I don't even care how high I make it, I just want to get out in one piece. 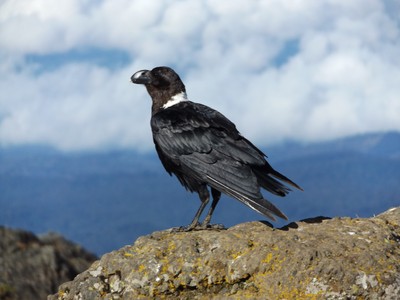 Posted by spsadventures 06:00 Archived in Tanzania