After close to 10 hours of sleep, I woke before they came by with the wakeup call. I felt so much better than last night, but was still disgusting. After a nice baby wipe bath, I felt much nicer though. Of course, after I had finished, they brought by warm washing water and soap.
Everything was covered in frost, and we're only at the first camp.
I prepped my daypack with way less than I had carried yesterday and showed up for breakfast. They served porridge, eggs, vegetables, and hot dogs. I ate what I could, but mostly enjoyed the hot cocoa.
We took off from camp at around 8.
The moreland path was super steep and rocky. The trees and shrubs only reached to the height of a person (taller than a leprechaun) and aren't nearly as dense as in the jungle part. We saw lots of clusters of tiny flowers not more than a cm in diameter, as well as gladiolas. Around this point, we started to see and hear large black ravens.
We hiked for quite a while. I felt that we had passed the midpoint for sure as today's hike is listed at 3-6 hours, and I estimated that we had been hiking 3-4 already. Also, while lots of porters passed us, we seemed to be going at a normal pace based on the other tourists. They'd pass us, but later we'd pass them while they rested (and repeat). I asked, and was told that the midpoint was over an hour away.
WHAT!?! How could that be?
Well, it was 9:10 and we had been hiking only a little over an hour.

As the path continued on very steep and rocky, I realized how unprepared I was for this. I had been swimming (exercise with low oxygen), and I did a lot of hiking to/from work, and did a lot of hiking around our area, as well as running. But all of these paths are well-maintained dirt that is relatively smooth from side to side. You can keep at a semi-constant pace and maintain running breathing as opposed to the uneven ground here that messed with my rhythm. Also, I'd hike 1 hour uphill one way or even 4 round trip, but that means you get as much down as up. Here, it's just hours of up, with no down to break it up.
Part of the path even required a little bouldering.
I kept thinking the path would improve just around the bend. There were some less-rocky dirt parts, but for the most part, it was uneven and I found it difficult to use my proper breathing. 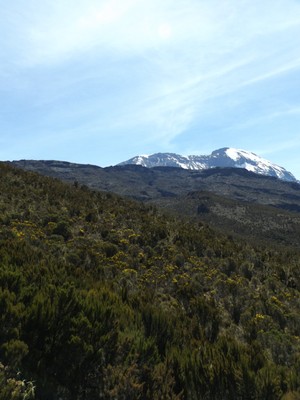 Finally, the path turned downhill and even and we relaxed for the last portion into Shira Camp (12500 ft, 3.8km altitude).
This time, I had no issues signing in. I used a lighter bag, paced myself, and felt good at the end of the day. My nose had been a bit runny, but that's manageable and non-serious.
We saw some porters headed down from camp to help those who couldn't make it. I felt bad for them, but had a new sense of confidence that I can do this. I will be able to summit.
Still, I have a million-dollar idea for a local: set up a massage shop at the camps. I bet tourists would pay exorbitant amounts of money for massages after a day of hiking.
When we got to camp, the guides sang us their Hakuna Matata song. It's not the Disney version, and I only recognized place names, but no other words.

We had a great peanut soup for lunch and realized that on day 2 we had almost half finished the bottle of chili sauce. We enjoyed watching the ravens as we ate.
Then, it was time to get clean clothes on and take a nap!
When hiking, we had passed one layer of clouds and they were below us, like they are when you're in an airplane. But, there was another layer of clouds above us. Occasionally we had walked through them. Yes. We literally walked through clouds. They're chilly and moist, and basically just like fog. The second layer also means that while it may not be raining below, it can be raining at our altitude.
When I woke from my nap, it was drizzling, but by the time I had to use the toilet, it poured. My rain gear was in the guide's bag as it was heavy and they helped lighten my load by taking it. I snuggled more into the mummy bag and tried to hold it until the rain let up. Eventually, I put on my partner's raincoat, grabbed his umbrella, and braved it. Of course, the rain that had lightened when I decided to gear up had started to pour even more by the time I was ready to go out.
The restroom tent is only a few meters/yards from our tent, but it still takes a lot of effort given that the tents are low to the ground and altitude increases even the effort of standing. I'm just glad we had a restroom tent and didn't have to walk all the way to the public bathrooms.
I also started to cough today. The "stomach engineer" heard and made me some ginger tea. These guys really do take care of you well. For example, one of the zippers on one of my pouches broke. I was ready to declare it trash, but the assistant guide took it and had somebody repair it for me.
The rest of the day, I relaxed with my kindle, had dinner, and went to sleep. I was lulled into slumber by the gentle rumble of voices from the various camps. Really, the magic is not getting to sleep the first time, but staying asleep as you turn over and getting back to sleep quickly after bathroom breaks.

Posted by spsadventures 05:02 Archived in Tanzania