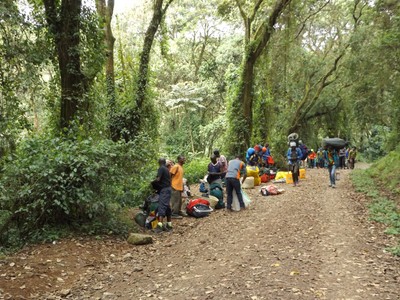 As we trekked through the jungle, we saw some monkeys, impatiens violets, and some impatiens that are endemic to Kilimanjaro. We heard hyrax? or some sort of tree mammal. 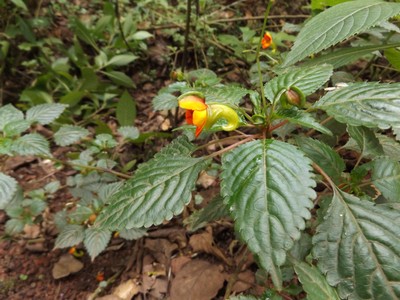 The path was mostly dirt and mud, retained by pieces of wood. Periodically, a break in the path would allow for water flow (during the rainy season) to cross only in specific locations.
It was a generally nice path, although somebody was eating some sort of candy and littering wrappers like they were Hansel and Gretel and needed to find a way out. My partner picked them up and we sort of hoped to find out who it was so that we could return their trash to them.
At first, we were going at a good pace and were actually passing some groups. Of course, the porters were passing us much faster. Our assistant guide, James (007), was walking with us while the main guide was doing something with the porters. After a while, we started slowing and people passed us. It's not a race and I was only using them as a reference way to know how we were doing. I was carrying way too much in my daypack, but nobody had checked the weight until significantly into our hike, when James took my water bottles to help me along. Eventually, my back hurt and he ended up taking the whole bag, even though I hadn't asked. I was sweating profusely, so my wicking clothes were wet. Yet, I was still hot and sweating more as it started to get dark and everybody else added layers. 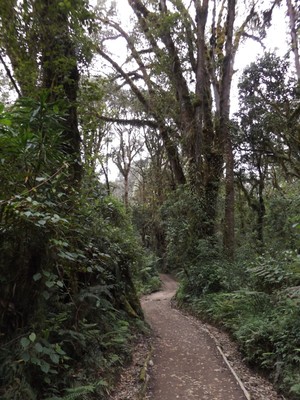 We had been walking through green jungle filled with moss, ferns, and tall trees. It started to get dark, but then we exited into the mooreland and got some extra light.
Our main guide had rejoined us, and even had some porters come down from camp to help carry our stuff. They also brought us light as even in the mooreland, we would not make camp by nightfall. But, by this point, I had pushed myself too far.
Even with hiking poles and no bag, I was taking a lot of breaks. At some points, my partner was literally pushing my back, helping me up the hill. (He's the best.)
Eventually, we made it to Machame Camp, ~3km altitude.
We actually had a great camp site, a bit isolated from the larger groups, but we had to walk past it in order to get to the ranger station to check in.
At the check in point, I could barely hold the pen to write my name. I was sweating and freezing at the same time. By the time we got to the food tent, my temperature regulation was way off. Even though food was ready and I was encouraged to eat, I absolutely had to get out of my wet clothes and into something dry and warm immediately. Food could wait.
Once dry and warm, we settled in for dinner. I could barely eat anything beyond zucchini soup and hot cocoa. I was so exhausted and starting to seriously doubt my capabilities here, but also hoping that a lighter bag would make the hike easier. I didn't need most of my daypack items in my daypack every day, and I could pack differently- like only taking snacks for the one day and not all of them. Still, I questioned my sanity and was pretty confident that I wasn't going to make it another day on the mountain.
We had already seen some people turn back, and I wasn't so sure they were wrong.
I settled in for sleep in thermal shirt and pants, sweatpants, a fleece, a hat, the mummy bag and a liner. Quickly, I realized I needed 2 pairs of socks and gloves in order to sleep comfortably. Other than getting up to pee, I slept very well.
The toilet tent has a chemical toilet that "flushes" by pulling a lever to release the waste into the bottom portion. It smells like chemicals, which is a lot better than waste. It zips shut and has a little wall pouch for toilet paper. Still, depending on how cold the night is, the paper can get cold and damp. Maybe it's an odd thing to notice, but both at the hotels and camp, the paper has been 2 or 3 ply. As everything these days seems to be "quilted" or fluffy, it sort of feels like a 90s throwback to have toilet paper with a ply count.

Posted by spsadventures 03:56 Archived in Tanzania