Today, we had a bit more time to stroll through the market that had been built up around the central bus station and its metro station. Dozens of sales tables were set up under tarp tents. They sold everything from produce and nuts to shoes and plastic toys (probably made in China). I suppose if you need to pick up anything on your way home, it would be very convenient. 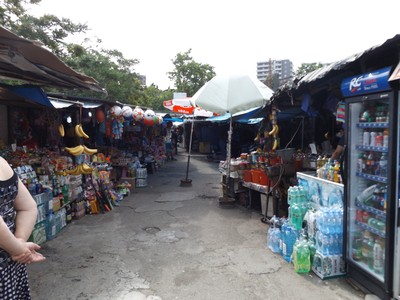 Last night, the city tour guide gave us some good advice as to what to go see today. So, we started at Marjanishvili Metro and walked down the street towards the Dry Bridge area. The street has been recently renovated, so all of the buildings are pretty pristine-looking, at least from the outside. The street is a pedestrian street, so we were able to walk right in the middle and take in the architecture. Most of the businesses were closed at this hour, but some of the shops and bars looked like they would be interesting places to visit when open.
At the end of the street, we started to see some of the Dry Bridge Flea Market. People set up tables and blankets all along the bridge, selling items typical of any flea market- old dishes, clothes, knicknacks, and other household goods. 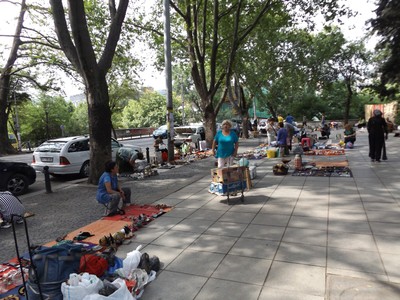 The flea market ended at a pretty park.
From there, we somehow stumbled upon a flower market. While small, this flower market had tons of bright, fresh blooms in a surprisingly wide variety. This was not a place where all vendors carried the same items. 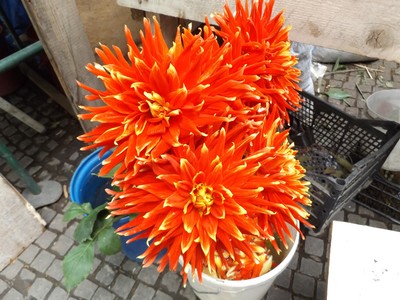 We walked back up past Liberty Square, where we had been last night, and followed Rustaveli Ave back to that metro station.
On the way, we passed the National Museum and went inside.
One of the first exhibits we saw was one of the best. Since the Dmanisi men were found in Georgia, the museum had a great exhibit showing the family tree of the different related humanoid species. The display had skulls placed chronologically and listed by site, so that you could walk through them and see how skull size and shape changed over the millennia. 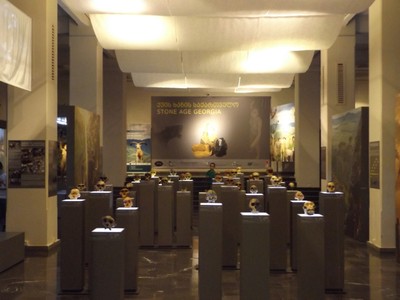 Further exhibits were somewhat less exciting- taxidermied animals, some minerals, old art from locations not related to Georgia. They did have some more interesting and relevant artifacts that had been dug up in Georgia and showed how Georgia was a crossroads influenced by many surrounding cultures like the Greeks, Romans, Persians. Also, they had a room full of Soviet Occupation history, showing lots of pictures and artifacts related to the people who were executed by the Soviets for political reasons. Overall, we spent quite some time there, and I recommend it.

That was all we had time for today, so we went back to the hotel to pick up our stuff and get a cab to the airport. The cab ride was interesting. First, the cab driver (called by the hotel) told us an amount that was less than what the hotel told us- great. Then, he bundled us into the car and set off before we could even get buckled. I was struggling to get my seat belt unstuck from in between the seat and the edge of the car. Fortunately, we pulled over to fuel up.
His car ran on natural gas, so we had to get out of the car in order for him to fuel up. When it was time to pay for the gas, he came to me expectantly and told me he needed payment. So, I paid him for the ride to the airport then, even though you're usually not supposed to pay until the end.
Then, I pointed out the seat belt that I was struggling to pull out. He tucked it back in so that it wasn't sticking out and ugly.
No, no. I expressed that I wanted to use the seat belt. I wasn't telling him that the loop looked ugly.
He assured me that it was fine not to use a belt.
No need. No need.
No. I've ridden in cars here. I would like to use the seatbelt, since it exists. Please.
Finally, he pulled the belt out, although his face said that he clearly thought I was crazy for using the belt.
We made it to the airport just fine, ending our Georgian Adventure on a positive note.

Posted by spsadventures 03:10 Archived in Georgia