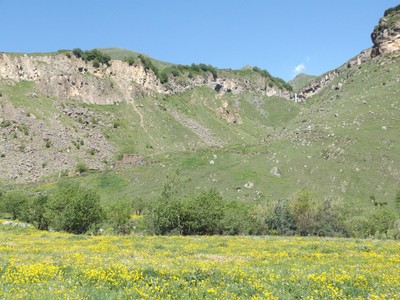 We saw on our hiking map that there were some nearby fortresses and waterfalls that had been recommended by the guy at the info station. We decided to try those. 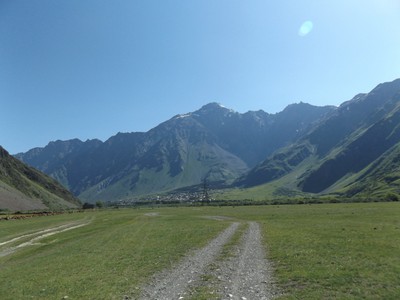 The walk was much flatter- only 919 ft (280 m) in total altitude change. But, it was longer- 10.3 miles (16.5 km). The scenery was different as well. Instead of hiking up through the mountains, we stayed in the valley below. While we could see the mountainous backdrop all around us, our immediate scenery consisted of grassland covered in tons of wildflowers. It was broken up by streams running down from the mountain, and a village or two. 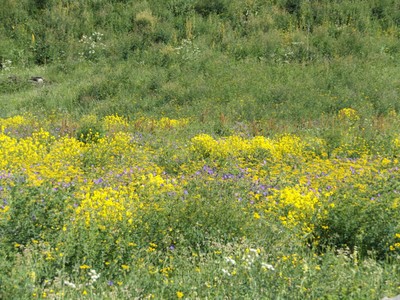 Despite the intensive ground cover, it was quite a dusty hike.
When we made it to the first site on the map, we realized that they were mostly just ruins. Although there was a sign out on the path in English, Georgian and Russian to explain what they were ruins of. 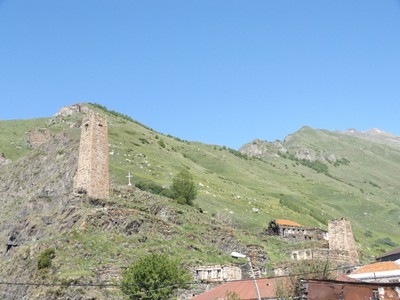 The second site was another set of ruins, but we also got a nice view of some waterfalls.
Then we turned around.
Unfortunately, we decided to try a different path back. This particular path worked just fine until we got to a stream that wasn't really crossable comfortably. We followed the stream for a while to see if there would be a crossing point, and then realized that we better go back to the same path we took to get out to the ruins. 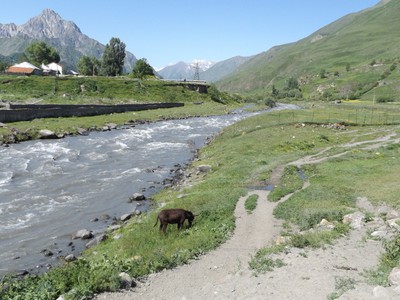 Eventually, we made it back to town in order to grab our stuff and get the bus to Tbilisi.

Except, the buses here are the kind that arrive and wait until they're full before they leave. There was a taxi driver who was willing to drive us to Tbilisi for only twice what the bus costs ($8 instead of $4 per person) and he was leaving NOW. We crammed into his car and went to pick up 2 more people, then headed out. They additional people we picked up blabbed with him loudly in Georgian the whole way.
He was not a better driver than the tour guide from the first day. He still drove super-fast, passed when there was very little room to, and in many cases he pulled out to pass and then had to slam on the brakes and move back in because there was somebody else close in the lane. He took the turns just as fast.
Except for one turn, where he pulled over, popped out, and grabbed ice cream cones for himself and the other passenger. Yes, he continued to drive while eating ice cream. When he was done, he answered a few calls while driving like crazy. Nothing happened, but i was thankful for my seatb belt anyway.

When we finally got to Tbilisi, he dropped us off at the bus station and we went to look for our hotel. We didn't know what time we'd finish hiking and get in, so we had booked a hotel right by the bus station. After wandering around the street next to the station for a bit, we realized that the hotel was AT the station.
Here was this clean, fancy 3-star hotel with chandeliers, plopped down in the middle of a busy, dusty, noisy bus station. It wasn't the best neighborhood, but the hotel was quite nice, the location was super-convenient, and the price was very cheap.

After showers, we walked all of 2 minutes to the metro at the bus station, and picked up a super-late (post 5pm) lunch along the way. Again, there's a lot to be said for the convenient location of the hotel.
We metroed to Liberty square, where we met up with the guide, Tamar, from Tbilisi Free Walking Tours. The tour was a really good introduction to the city. I highly recommend it. 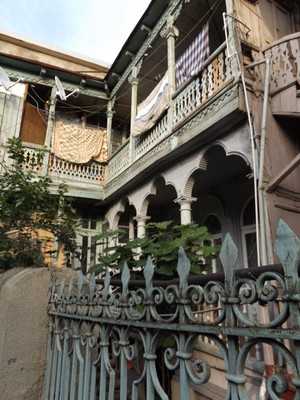 We saw the seminary where Stalin studied religion (and dropped out). We heard some of the history of how the city was founded by a hunter who lost his falcon. We walked through a bunch of streets that were old, and some renovated. It was neat to see the different architectural styles and what the Soviet occupation did to the old mansions.
We got a chance to see the famous clock right at 7, when not only does the little puppet man come out to ring the chime, but they have a little show at the clock as well. 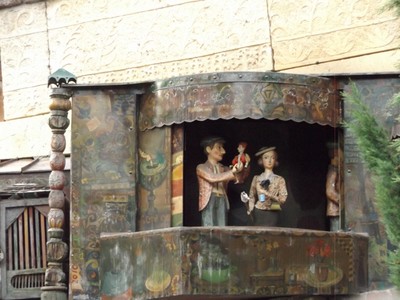 We saw the famous bridges, palaces, and fortresses around town. All the while, the guide was explaining the significance of these structures to us and giving us suggestions as to what to see more of, how to dig deeper into the city, and what was worth spending a little more time on.
One aspect I really enjoyed was the explanation of why a lot of the newer buildings are all glass. Basically, the government is super-transparent. Georgia has a very low rate of corruption (I'm jealous) and the government buildings are all built transparently to symbolize how transparent they pride themselves on being. 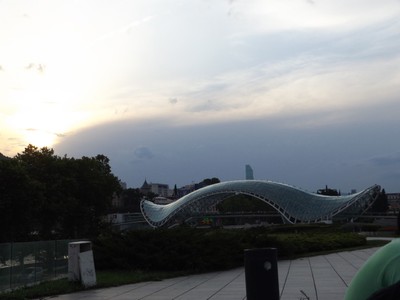 The tour ended near the baths that were the original site of the original Tbilisi, where the falcon was lost by the hunter.
Not too far away, we saw a restaurant, Alani, that the guide had recommended. They had typical Georgian food as well as folk dancing and singing. The lady who was standing on the street, trying to attract guests assured us that they took credit card, so we went in.
The dancing was lots of fun. 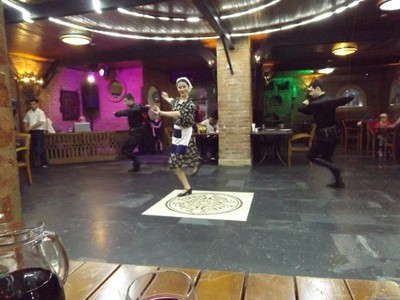 The food was generally very tasty. We tried Pkhali, a ground-up spinach appetizer that was decent. The wine, which Georgia is famous for as they have the oldest proven wine production, was also good. But the Khachapuri (I got the traditional boat-kind) was amazing. Basically, it's a bread boat filled with melted cheese, a runny-yolk egg, and then they throw some pats of butter in there to get all melty. It was probably the best thing I had to eat the whole trip. My partner got the Shkmeruli chicken (chicken in a garlic broth), but he liked the khachapuri better as well. 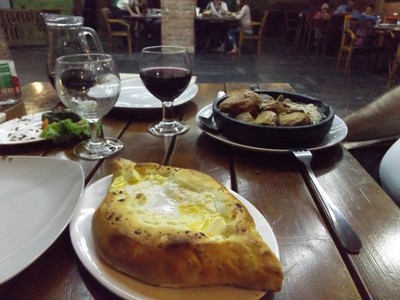 At the end of dinner, we tried to pay with our credit card. We had both separately asked the lady on the way in and received a confirmation that they take cards. They did not. I enjoyed more show while my partner ran upstairs to the ATM. We were pleased with the food, but not so much the trickery. Really, we would have just gone to the ATM before sitting down if they had told us we needed to.

Having walked a ton yesterday, a ton earlier today, and then another 3 hours on the walking tour, my feet were dead. We gave up on more exploration for the evening, and returned via metro to the hotel.

Posted by spsadventures 10:28 Archived in Georgia