This morning, we had hot water for showers and gas so our hostess could cook breakfast. Breakfast was relatively simple- meat, cheese, bread, and a pan fried bread with cheese and potatoes inside that she had clearly made from scratch that morning. It was very tasty and filling. We couldn't finish it all.
We packed our daypacks for the hike and set out to Gergeti Trinity Church, a small monastery up at the top of a mountain that looks over the town.
It's on the top of the left mountain in the picture below. 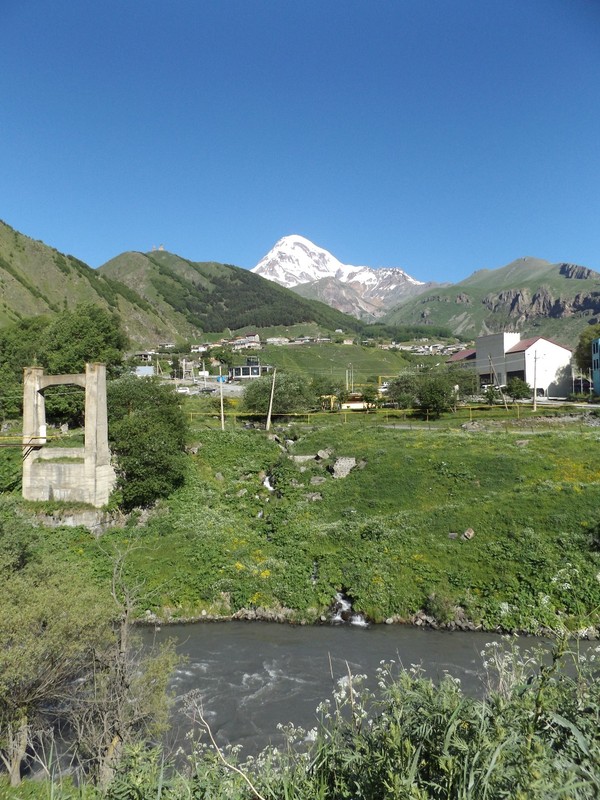 Yesterday, we talked to some other tourists who had come from there. They said it was about an hour and a half climb and that there were places you might need to use your hands to scramble up.

We didn't experience that. The trail we took was steep, but hands weren't needed. We crossed the bridge in town and started to follow the signs to the church. They sort of end in a dirt field labeled "parking lot," but a trail picks up from there. The trail is not marked at all, except with piles of horse poop. We just followed the other tourists, but there weren't really forks or anything that might send you on the wrong trail. 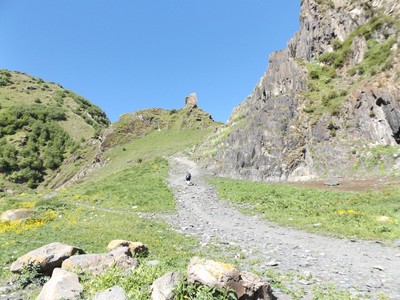 On the way up, the trail passes right next to one of those "Gondor towers" we saw so many of yesterday. I appreciated getting a good look at it up close. While the well-built stone structure was impressive, I wonder how much maintenance it takes to keep the plants from devouring it. Lots of pretty flowers grew out of the walls. 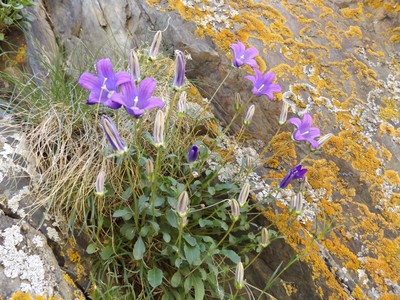 It ended up taking us 2 hours to get to the Monastery. We did pass some people along the way, but more passed us. Since we are relatively experienced hikers, I was wondering if the altitude was affecting us. We just got in yesterday, and even the town is almost 2 km up. To go climbing on our first day may have affected our speed. I would suggest planning a minimum 1.5 hours, but know that it could easily take more.
The church is actually somewhat plain for an orthodox church, but it has a great view of the town and of the mountains beyond.

In order to go inside the public part (you can't go in the monastery part), ladies are supposed to wear a skirt or dress. If you didn't bring one or a shawl that you can wrap and use as one, they have a basket of wraps you can use. Apparently the "modesty" rules here say that a shortish skirt is more modest than long pants.
Inside, the church is relatively dark, probably to protect the paintings. The church is decorated very typically for an othodox church. It wasn't particularly special as far as i could tell, but it was cool to see the monks hanging around. The view from the church was amazing though. 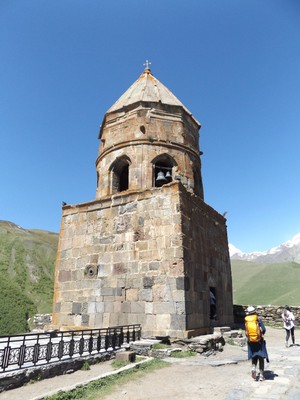 After we saw the church, we kept climbing upwards some more. We followed the path to Gergeti Glacier, although when we stopped, we were still about 2.5 hours of hiking away from the glacier itself. While there had been a few (although not many) trees on the way to the church, there were none past it. Nothing large grows this high up, although there were plenty of short plants and some really neat wildflowers. 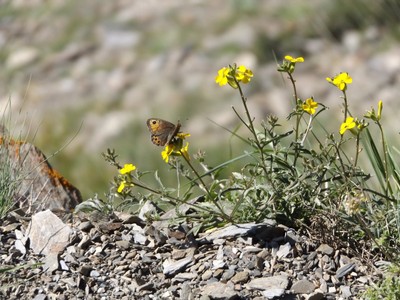 The church faded into the distance until it was as far below us as the town had been below the church. 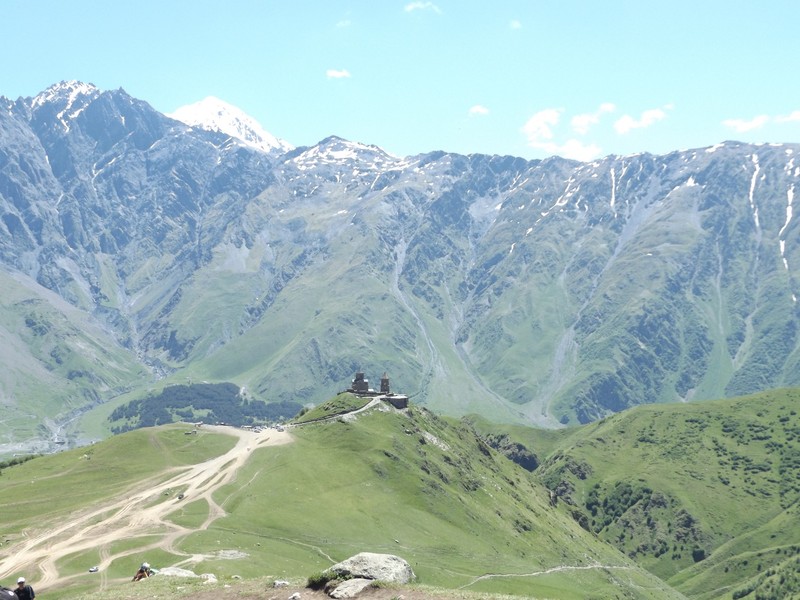 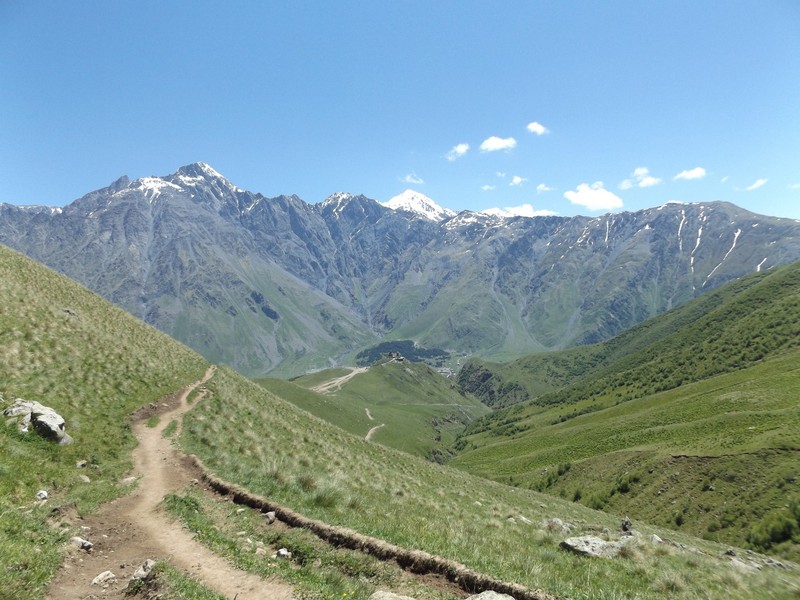 We took a break at the "top" for us, and ate our picnic lunch of cheese, bread, and some of the other items we bought at the fortress yesterday. We were up in the mountains, without other humans in sight, just enjoying the seclusion and nature.
But then it was time to turn back.
We hiked back down to the church, which was much faster than hiking up. We ended up taking a different path down from the church than we took up to it. This must have been the path they told us about yesterday. This path was very steep and gravely enough that the going was slow. But i was glad to be going down and not up. 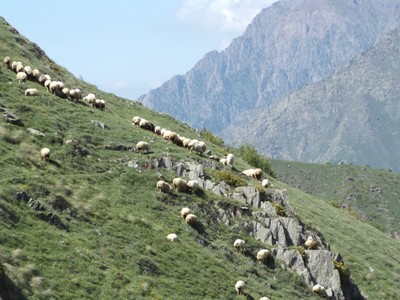 Towards the end of the path, it took us over a rubble pile and then through some side entrance into town.
We made it back, exhausted, stinky, and really glad to have done that much of a hike.

After much-needed showers, we headed out to one of the 3 restaurants in town for dinner. We picked on randomly, and I'm hoping that we picked wrong for the sake of the town. The food was ok, although not very exciting, but the portions were TINY, especially for the price. We started out with traditional eggplant rolls (Badrijani Nigvzit) and some rice. Then, we got some sausage log things, and were waiting for my meal until we realized that the rice was supposed to be my meal and wasn't just something that came with the eggplant. So we ordered lobio (beans in a tiny ceramic pot). Nothing was bad, but nothing was great either. There may have been a bit too much dill, but since it was lacking other flavors, that was all the excitement there was. For these few tiny dishes, we ended up paying more than for the huge more-than-we-could-possibly-eat lunch the other day. It's a good thing I wasn't so hungry.

Posted by spsadventures 09:38 Archived in Georgia