This morning, the wakeup call came early- 6:15, although I was already in the bathroom at that time. We came out to see the ship pass through the Lemaire Channel passage. It's stunning (as all of the Antarctic is), but it's supposed to be extra stunning because the mountains on the side of the passage are higher than the passage is wide. Also, it's filled with ice. To be fair, the lack of perspective makes it hard to tell how tall the mountains are, even though the clouds swallow them up. And it's hard to tell how wide the passage is because it's filled with ice chunks that could be as small as a foot or as large as a building, but I couldn't tell until we were right up next to them which size any iceberg was. 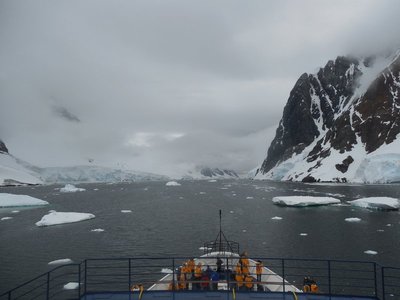 Lunchtime update:
Even before the landing, we saw tons of animals and beautiful sea. 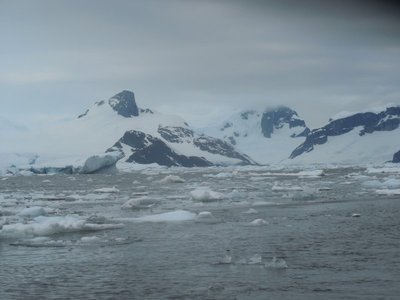 The morning started with a Peterman Island landing. In addition to some sort of small abandoned building, Peterman Island is home to both Gentoo Penguins and Adelie Penguins. We saw them all. 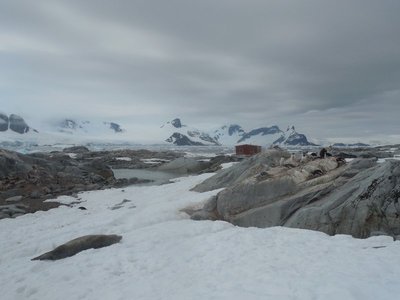 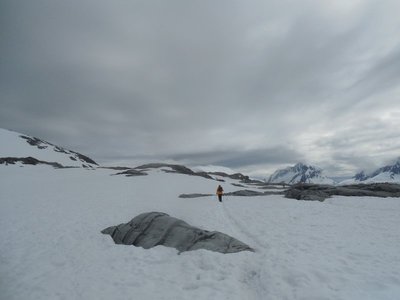 The area we saw first had the two types of penguins mixed, but I didn't know at first. I jut saw a penguin that looked just liked the Gentoos we saw yesterday and couldn't figure out what made the Adelies so different. Then, I realized that I was looking at a Gentoo, so of course it looked the same. The next one over was an Adelie though. These don't have the white spots around their eyes. Their faces are all black. 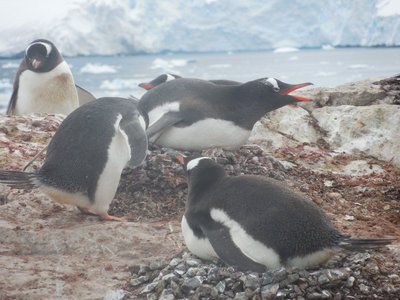 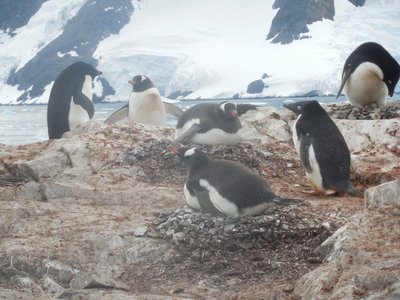 Several penguins sat on nests, and a few were guarding chicks! The chicks are gray and fluffier than the parents. They'll change colors later. Again, just watching them go about their regular business is mesmerizing. 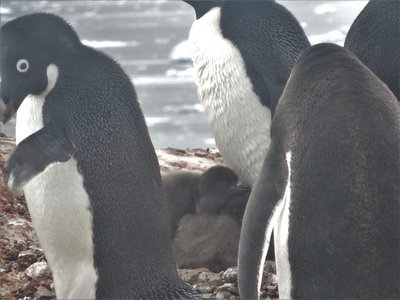 After a while, we tore ourselves away and headed back to the landing site, where nobody else was. It took us a while, as we had to give right-of-way to several penguins who were taking their time crossing our path. It's awesome to see them cross paths, because they sometimes get so close.
We sat on the rocks to observe them quietly. We sat as still and quietly as possible, just enjoying the glacial stream running through the rocks. A few penguins came up very close to us- one was less than two meters away, just cleaning itself and fixing its feathers. Another gave us a great view of it going for a swim. The water is so crystal-clear that only the ripples affected the view of the penguin under water. We had them all to ourselves for a bit, and it was amazing. 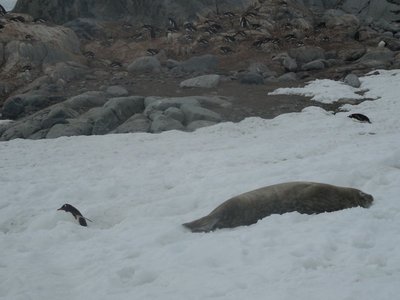 Seal Chillin' as Penguins Waddle By 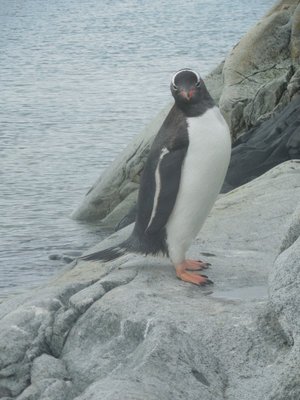 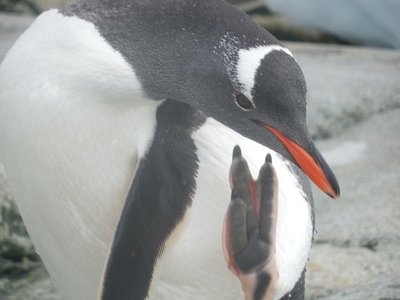 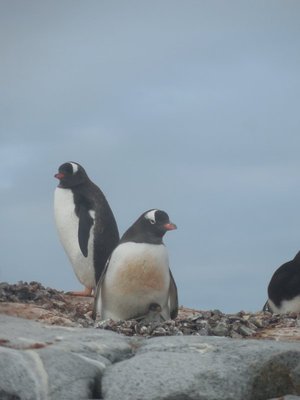 The other amazing thing we saw was an iceberg breaking up. It was a small one, so there wasn't a lot of danger, but we heard the thunderous noise, and saw the berg start rotating in the water to resettle into a new position based on the new weight distribution.
When it was time to leave the island and head to the zodiak cruise, we headed straight for a leopard seal. The seal was sunning itself on a piece of ice, sitting so still I asked if it was dead. But then it moved its head, and we could see a grin on its face that reminded me of our cat's face when she sits in the sun. 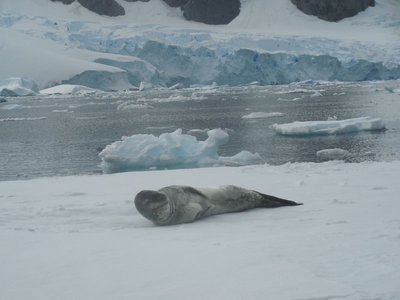 We enjoyed the scenery some more. Here, the ice is much thicker than it was yesterday. The various pieces come in a wide array of shapes and colors, as well as sizes. Really, it's like a modern art sculpture gallery made by nature. The coolest one we saw had a hole in it, so that it formed a sort of arch over the sea. Another cool one had been eroded by the water and then turned on its side so that you could see the erosion line reaching to the sky. And one had started forming little icicles so that it looked like a cave with stalactites and stalcmites in it. 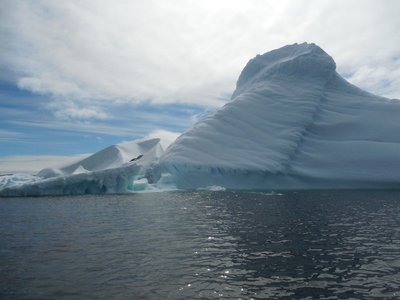 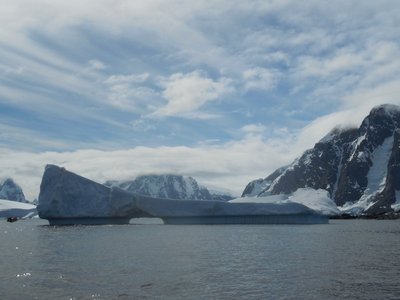 We saw another seal- this time a Crabeater seal. Again, it was just sunning itself on some ice. 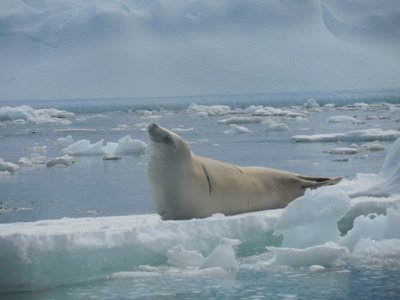 As we headed back to the boat, the sun came out. The Antarctic is bright when it's cloudy. With the sun out, sunglasses with good UV protection are a MUST. It's virtually impossible to look at anything without them because your eyes hurt so much. However, the shadows created by the mountains contrasting with the super-bright white snow is such an amazing sight, you just have to see.
Lunch today is an outdoor barbecue. We had burgers, salads, all sorts of grilled meats, and our first taste of their famous curry. I was told they're great, and they are, as is all of the Indian food aboard. (As is almost all of the food aboard.)
Again, we needed a nap. The sun and cold and hiking really take a lot out of me.

Evening update:
This afternoon's activity was pretty much all on land. We stopped where Charcot stopped over a hundred years ago. I was excited to see the rock pile he made.
The trail to the left split 3 ways, and I thought I was taking the leftmost one to the history guy. Instead, I ended up back at the penguin colony. 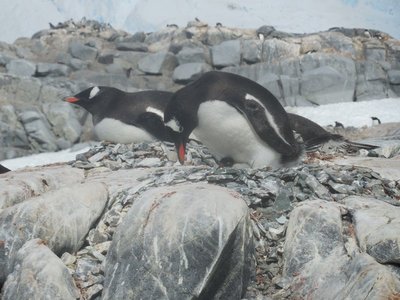 There were several chicks there, so I stayed and watched the penguins a bit, but then I asked for directions to the historical path. It was supposed to be on the right before the landing site. I got back to the landing site without seeing the flag. I turned around and saw the flag way off to the side.
Keeping the flag in my vision, I made my way back up the hill and over to the site. I was the first one there, and the guys who arrived later made the same comment I did- the flag was too far from the main path and it was hard to find. They redid the path, and more people came.
The end of the path had a great view, but the rock pile wasn't so exciting. This was the first guide who didn't spread his enthusiasm like a highly infectious disease. It was still cool, just not mind-blowing like everything else. 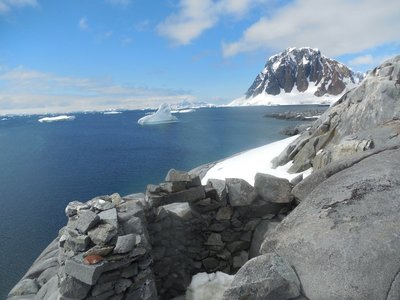 The rock pile (cairn) was in the shape of a small hut. Charcot's men built this in order to take meteorological measurements and to observe the penguins. It's still mostly standing so long after. 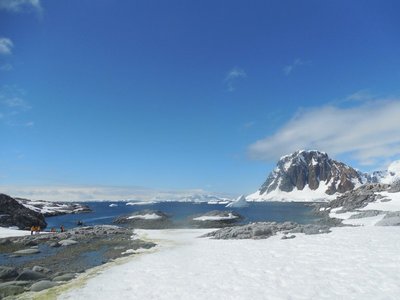 
Back on the main path, I had a great view of the "Iceberg Graveyard," a sea full of slowly melting icebergs. They were all sorts of exciting colors and shapes..
I returned to the landing site and went to the right, up the rope path. I slipped and fell down a bit, but it was still really fun to climb the rope up the steep snow slope.
At the end of the path, we reached another rock pile. This one is not a shelter, but it was used in more modern times for science. This one had amazing views, but I didn't have enough time to linger as we had to get back to the ship. There we so many options of what to do at this site, that nobody got to do all of them. 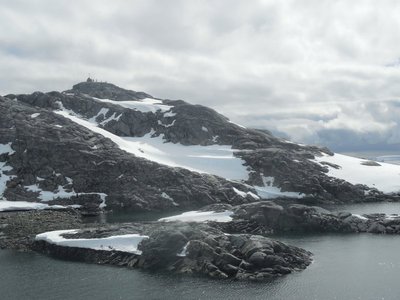 The beach here is generally a bit rocky, and our zodiak got stuck on a rock. We had to unload some people while others moved to the far end of the boat and bounced in order to free it. I was standing in the shallows and taking a picture of the whole process when my camera ended up in the water. I really should have been using my scuba camera since my feet were in the water, but I had just gotten so used to it being ok to use my regular camera. In any case, I just hope that my memory card didn't get corrupted. I'll be using my scuba camera or phone for everything tomorrow, apparently. 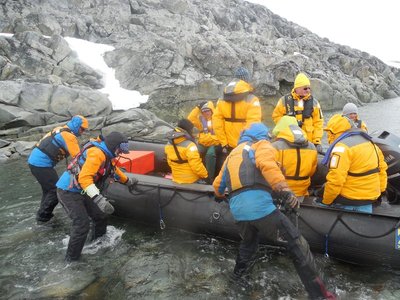 Back on the ship, we had another debriefing where we learned a bit about how the icebergs we saw today get their various colors. We had another fabulous dinner. And tonight's "entertainment" was a lecture on penguins. Also, the gift shop was open.
The lecture was interesting and informative, but I had to catch the end of it from my room because I was so tired from the day. In our rooms, we have tvs with 4 channels. One is a non-stop live stream of the lounge, so when there are debriefings or lectures, you can catch them in your room. Also, you can spy on all the folks making coffee. Another channel is a nonstop commercial for other Quark trips. Some of them are quite interesting to watch, and they definitely make me want to sell a kidney and go on another trip. The third channel had been playing Blackfish (a documentary about captve Orcas) on a loop for the first 2 days, and is now playing a documentary about melting polar ice. And the last channel plays weird movies (Amelie was on loop before. Today we got the Life Aquatic with Steve Zissou).
If you happen to somehow not be exhausted by the fun daily activities, have finished the movie loops, talked to whoever is in the lounge at the time, and are still looking for something else to do, the library here is quite good as well. I think they have every book ever written about either pole, as well as travel books related to the ports they start at, polar animal books, geology books, and some novels. If reading isn't for you, they also have a ton of board games. You can't get any sort of bored here.

Posted by spsadventures 02:01 Archived in Antarctica