When we woke, the plan was to be ready at 10:45. Then, they cancelled the flight and told us to be packed for a hotel change at noon. A bit later, they started calling everybody to tell us all to get down to the lobby ASAP so that we could leave for the airport at 11:30.
Let's hope that yesterday was like a fire drill where we all learned the process, and today we will all be prepared to do the real thing quickly. 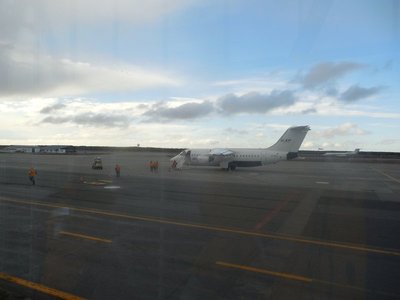 Everything went smoothly and as planned at the airport, we took off, and were again served a uniform meal that wouldn't fit the dietary restrictions of most religions, vegetarianism, gluten-free, nut-free, or a heart-healthy diet.
This time, though, we landed in Antarctica!!!! I am now in the 7-continent club! 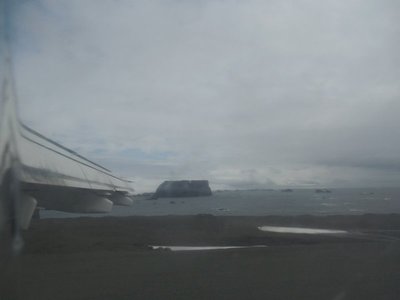 The landing area isn't like anywhere I've been before. It's basically a large-rock gravel field about the size of a football field. The plane comes in and stops really quickly, as there isn't exactly a ton of space. We alit and moved aside for the other folks to land. Unfortunately, we weren't allowed to take pictures, since this is a Chilean military installation. (Military only to support the scientists, as for any other reason isn't allowed on the continent.)
When everybody had arrived, we walked about a mile on an area of cleared-off dirt in order to get to the beach with the zodiacs (small motored pontoon boats that they use to transfer us from the boat to the shore and vice-versa.) On the way, we saw our first penguins! They were just hanging out on an area of the beach not so far from where we were.
We climbed into the zodiaks and headed to the ship! We were all wet by the time we arrived, but we arrived safely. The whole process was a great test of our winter gear and its waterproofness. A few people discovered that their pants weren't as waterproof as advertised. I discovered that while the material in my gloves is waterproof, one of the seams in the left glove was not. Fortunately, we have some extra gloves, and the boat store has a few pants people can buy.
(In case touching the sea on our Punta Arenas walk didn't count as the Southern Ocean, this certainly does and I've now touched all of the oceans as well.)
A whale came very close to another one of the zodiaks, but I didn't get to see that as we were checking into our room at that time.
After everybody was aboard, they pulled us together for a briefing. We heard about the safety procedures, met the staff, and learned what was going on tonight and tomorrow. Shortly after, we had a safety drill where everybody had to meet at their muster stations and go to their lifeboat.
It was mandatory, but some people felt too seasick to attend. They were found and attended. This program had us fly over the Drake Passage (the flight that had issues.)
The Drake Passaage has some of the worst seas anywhere. The winds regularly get to hurricane speed and beyond. The waves are incredibly high and choppy. Before this trip, a friend told me that 100% of the people on his trip got seasick on the Drake. During dinner, one of the staff told me that even some of the staff get sick on the Drake, and once, the winds were so bad that the crew even stayed in their quarters and people slept on the floor because they kept getting tossed out of bed.
I did not get seasick per say. My stomach felt fine. But, my balance was so far off that I felt like a reeling drunk. I grabbed every chair, every handrail, and every wall on my way everywhere. Enough people were feeling it that the dining hall was noticeably empty. But, enough people were ok that there was semi-normal service.
At some point during dinner, the boat calmed down. I don't know if we just got to the other side of the South Georgia Islands, so the seas were more protected, if the wind died down, or what, but we could feel the difference.
The scenery meanwhile, is almost impossible to describe, but I'll try. The ocean runs on to the horizon in some places, and in others, it hits ice-covered land. The land seems mostly white, with some black sticking out here and there. At some points, you feel like you're looking at the best-quality black-and-white photo ever taken due to the general lack of color. But the birds flying around remind you that this seascape is real.
"Sunset" is just before midnight and "sunrise" is about 2 in the morning, so the light is constant. It just sort of gets grayer for a while and brighter during the day as the clouds aren't allowing us to see the sun- just its scattered reflection everywhere. 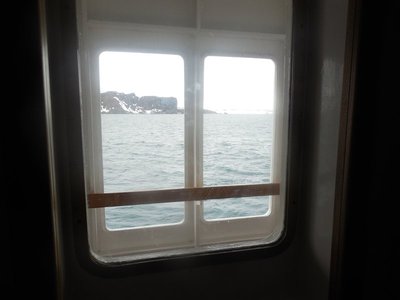 View from our room at night

Posted by spsadventures 01:57 Archived in Antarctica