5 am is a less-than-ideal flight departure time, but that's what we had. The airport was surprisingly active for this abhorrent hour.
Most of us slept the whole way to Punta Arenas. The cruise company (Quark) picked us up from the airport and drove us to the hotel.
We passed a bunch of small settlements with matching cookie-cutter houses before getting to town. This seems to be a very active shipping town, as most of the businesses we passes on the way were cargo or sea-related. The hotel we're staying at, Dreams, is the biggest building in town, and easy to see from anywhere. 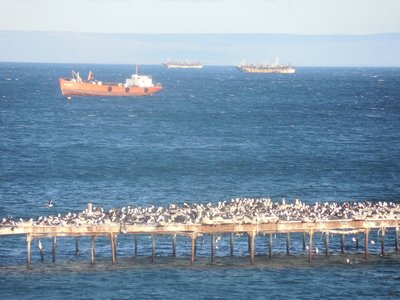 View from the Hotel

We grabbed a quick breakfast here, and then tried to check in, but the rooms weren't ready. some of us went out on the town to see what they could before the rain started, and some of us went to donate some money to the casino.
The casino is quite a process. First, you have to get a ticket to get in. If you're staying at the hotel, that means getting something from the front desk to get in for free. Otherwise, you pay an entrance fee at a machine. Then, you have to go get registered to get a card. You fill out a form, show your passport, and several long minuter later, you have a card pre-loaded with your entry fee of 3500 Chilean Pesos (a couple of dollars).
Then, you have to take your card over to a machine and set the PIN. You can also load additional money. Only then can you finally start playing.
At noon, none of the roulette or card tables were opened. We were only able to lose our money to the slots.
After losing our free money quicker than we would have liked, we proceeded to fall asleep on the lobby couches by the check-in counter. Some rooms were available early, and the front desk worker came up to us to offer them, possibly just to get us off the couches.
The rooms are huge and fancy. One entire wall is made of windows, so we have a great view of the town, but it also means that we heard the wind the whole time. The windows constantly creaked and moaned to the poor weather outside. The other side of the sleeping area also had a huge window- looking right into the bathroom. Like the Asian hotels I recently stayed in, you have to lower a curtain to prevent people from watching you shower or on the potty. I have no idea who came up with this fad, but I hope it stops.
Today's program is simple- we get our new supplies and pass weigh-in and then have a briefing and group dinner in the evening.
We got our boots and jackets without issue. Then, we went to the desk for weigh-in. There is a very strict weight limit for tomorrow's flight, and they make sure that every single bag is going to be ok. I was concerned about one of my carry-ons, but it turns out we were well under the limit. Also, if people had used their outer gear elsewhere, the guys needed to check and clean it to make sure that it wouldn't bring foreign contaminants into Antarctica.
After weigh-in, we had more rest time at the hotel, admiring the rainy, windy, cold weather from the warmth of our nice hotel room. When it cleared up a bit, we went for a brief walk by the sea and touched whatever ocean is here. 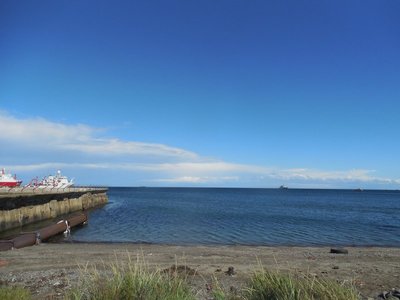 It is so far south here, that 6pm is as bright as 3pm is at home. Even at 8:30, I could have been easily convinced it was 3.
Our group briefing informed us of the plans for the trip as well as safety procedures. Summary:
The weather in Antarctica is unpredictable and controls everything. Be prepared for anything and be flexible.
Don't do stupid stuff and listen to the guides.

We had a nice group dinner, packed, and went to bed. The plan was to leave at 10 tomorrow, but they told us that if the weather changes, we might end up getting a call in the middle of the night to come down and go.

Posted by spsadventures 04:49 Archived in Chile