They didn't wake us in the middle of the night to say we had to go early. In fact, at the morning briefing, they told us our flight would be at 3pm instead of 1pm. That gave us the morning to explore.
We walked along the sea in the opposite direction as yesterday. The buildings here are also covered in murals, although unlike Valparaiso, they are not brightly colored. The are mostly scenes from everyday life by the sea. 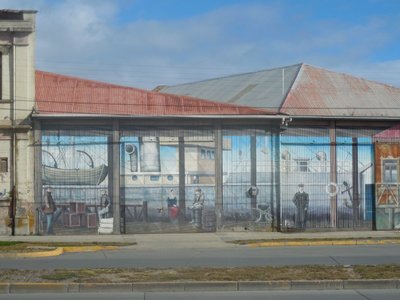 We passed a monument and a closed tourist information booth before arriving at our prize- the dinosaur playground. When we left the hotel, we were wondering why the flight had been delayed as the weather looked gorgeous. There was no sign of anything inclement anywhere. By the time we got to the dino playground, we understood why. The sky had darkened considerably and it was obviously going to rain shortly. They needed a 6-hour window of clear weather in order to get the planes across the Drake Passage and back, and we were not in such a window. 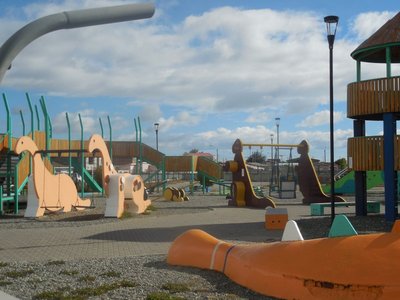 We headed back to the hotel, hoping to beat the storm.
We didn't.
About a quarter of the way back, I felt droplets. About halfway back, the hail poured down, soaking me through all my many clothing layers. I arrived back at the hotel drenched and spent the next hour or so rotating my clothes and shoes on the radiator and drying them with a hair dryer.
It took a while, but everything was dry by the time we had to check out and go to lunch. 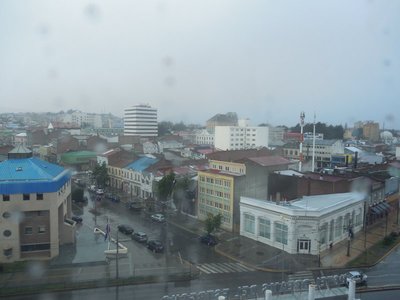 Lunch wasn't stellar. Pretty much everything was meat or white carbs, and some items were not worth eating, including much of the dessert. I would expect a bit more out of a hotel of this caliber.
We left our bags that aren't coming to Antarctica in a special storage room. Everything else got loaded onto a bus to the airport. We went through a normal check-in process, normal airport security, and waited in a normal sewting area. Except that everybody matched in their bright yellow Quark jackets. While waiting, they delayed our flight again by an hour, so now we were scheduled to leave at 4.
We hung out at the airport. 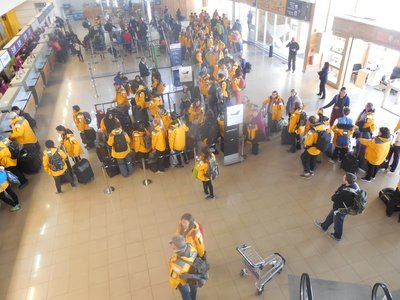 Luckily, there were no more delays and we walked out to the small plane on time. The plane seats 96 passengers, but they only fill it part way (to about 70) so that there is lots of extra room and unused capacity. It's safer, but also more comfortable for us to not be packed in like sardines. To be fair, even if it was full, it would still be more comfortable than most flights as the legroom was more comperable to "premium" seats on a regular plane. 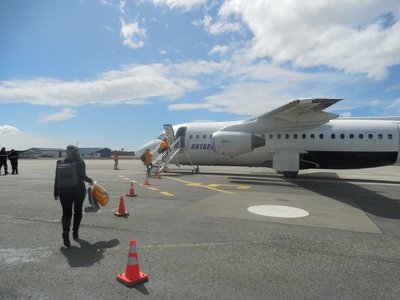 They served us another meal not appropriate for vegetarians- even the salad and yogurt had animals in it.
Then came the real kicker- the weather had changed and it was not safe to land in Antarctica. An hour and a half into our 2 hour flight, the pilot turned the plane around and we headed back to Puntas Arenas.
We landed, unloaded, and waited for info. The weather wasn't good for tonight, so we went back to the hotel. We all had rooms because since the plane couldn't get out to the boat, the people who have already been on the boat for a week can't get back.
Tomorrow, we try again. They expect a noon flight, but will let us know if things change.
This is certainly an adventure.

Posted by spsadventures 02:48 Archived in Chile