Today, my family got here!!!
We packed up our things to go move to their hotel by the airport. As we walked to the bus, we got stopped by a surprise parade. Carabineros (police) on horses and with instruments paraded past playing a marching tune. 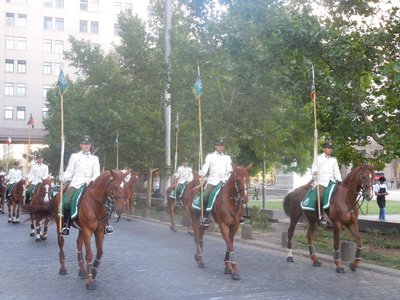 The hotel we moved to is very nice. It also costs 10 times as much per night as the air bnb we were staying in. But, for people who are arriving and leaving in the middle of the night, it's perfect as it's right at the airport- no car needed.
After happy greetings, we took a cab downtown. For the 6 of us, it was 30000 pesos. I think we might have been able to negociate that down, but it was the price we got from multiple people and we had to take a van instead of a regular car, so it made sense to us that it was a little (bu not so much) more than what a regular cab was supposed to be.
As we walked around the Plaza de Armas, I regurgitated some of the info I remembered from the city tour. I was able to remember why all the Spanish cities had one (so that in the case of attack, the citizens knew where to go for protection and arms). And I was able to remember what the guide recommended.
One of his recommendations was to go into the pre-Columbian art museum. I recommend it as well. It's not only about Chile, it also covers up to Mexico, but it was very interesting and educational. I got a real feel for the various cultures, their art, practices, and even dances. 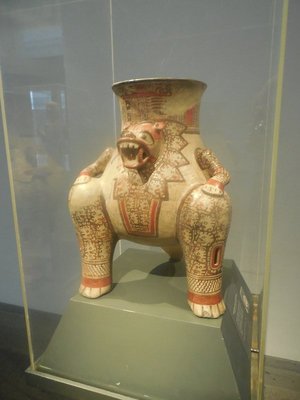 Next, we stopped at Rapido, the empanada place beind the museum that the guide said has the best empanadas in Chile. I believe him. The dough was fluffy. The cheese was perfectly gooey. And the pico de gallo was just the right blend of flavorful and spicy hot.
Now that we had put something in our bellies, we walked over to the Mercado Central. It used to be the building containing the marketplace where locals picked up all of their food. People still shop here, but much of the produce is across the river at the other market. This one is more for fish. Also, a lot of the market has been converted into restaurants for tourists. The guide recommended not eating here, but eating at the restaurants outside the market as the prices were half as much as inside, and the seafood is just as fresh. 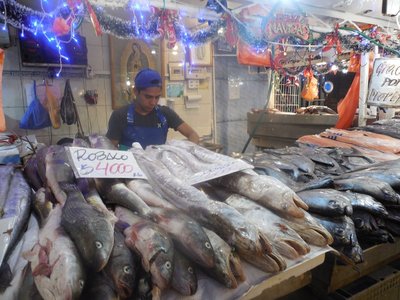 I mentioned the river. The river is a brown trickle of loose sludge that flows through town. Clearly, based on the rocky bottom, the river is very low right now and must be higher at other times of year. It might even be nice to look at during those times. However, right now, the river is ugly. Instead of walking next to the river as we followed its path through town, we walked through the Forestal park. This park runs next to the river for a good portion of downtown, and took us past the Fine Arts building to the Bellavista neighborhood. 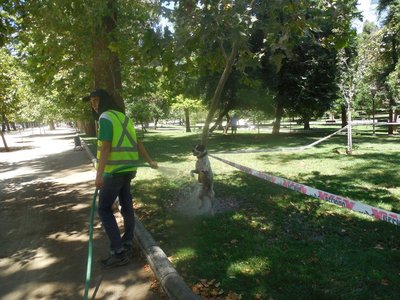 The plan was to take the funicular up the mountain, but it was closed for maintenance. Instead, we took the "substitute bus" which wound up the mountain and brought us to the top.
Although some of us had already seen the view of the city, the newer-comers hadn't yet. They really enjoyed looking out and getting their first glimpse of what was below.
The bus took a different route down the mountain, giving them a chance to see a slightly different part of the city, and then dropped us back in Bellavista, close to the park entrance, but even closer to the craft fair there. 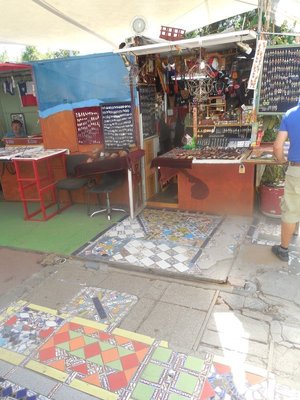 The artists sell a wide variety of goods from handmade jewelry and tchotchkes to leather boots and woven clothing. We didn't buy anything, but it was interesting to look.
We ate dinner in the area as well. The restaurants are clearly set up for tourists since they have English menus, but the food was good, so I'm not complaining. Most of our party got seafood. One had the very traditional "pobre style steak," which meant that it had fried eggs and caramelized onions with it. I shared an interesting tomato-olive-sesame/peanut sauce salad, a regular salad, and some delicious gnocchi in a sweet creamy cheese sauce. I'm not sure how traditional it was, but it was tasty. 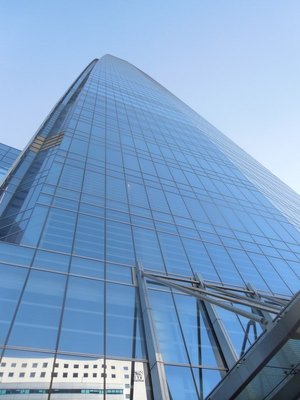 Our last stop for the evening was the Costanera Center- the tallest building in South America. It didn't seem that tall after being at Taipei 101 so recently. It's about half the size. But it was interesting in the the top level you can get to has an open top. You can see the sky and feel a bit of openness. And of course you get a fabulous view from the top. 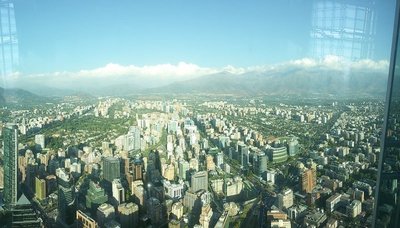 The base of the tower is a mall. Since it had a grocery store, we picked up a few things for breakfast for tomorrow. Conveniently, the mall also has a taxi stand in the basement, so we were able to get a six-seater back to the airport.

Posted by spsadventures 03:06 Archived in Chile