Our guide picked us up just before 9 and we headed to the coast. On the way, she pointed out one valley as the "food valley" (where much of Santiago's produce comes from) and another as the "wine valley".
In the wine valley, we saw non-stop wineries. Every billboard advertised one and every exit had a sign for at least one. We briefly stopped at one that had a store with free tasting, but no sort of educational tour. One of the wines in the free tasting was Chicha- a traditional one. It is golden-colored and cloudy, not clear. I'm told that the cloudiness comes from the yeast, which also give it a very tangy taste. 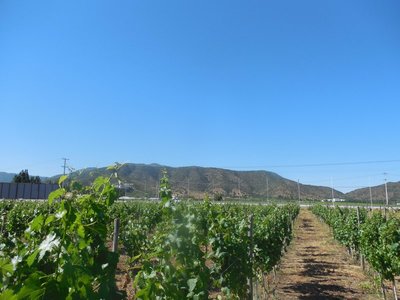 Late morning, we arrived in Valparaiso. Today is market day, so the main road was filled with produce stands and flea-market blankets. The produce was gorgeous, but also huuuuge. Some of the cabbages were significantly bigger than a basketball. Some of the corn was thicker than biceps. We even saw celery stalks that were over half a meter long with a base wider than my palm. 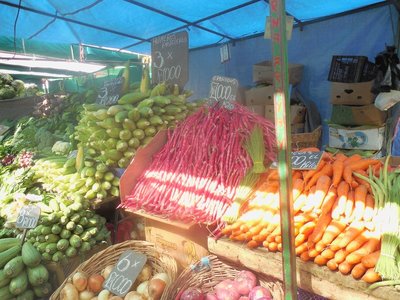 In the flea-market area, they had typical items- used clothing, electronics, household goods. Each set their wares out on their blanket for display an waited for an interested passer-by. 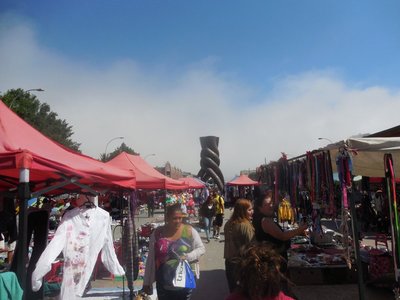 We also stopped by a market that was in the market house. It was similar to the one we saw yesterday, but it wasn't as fancied-up and it lacked restaurants.
From there, we headed down to Plaza Sotomayor, one of the main plazas in town. Several important buildings lined the square, but one side was open so that a monument was the only thing blocking full view of the sea. The monument remembered some national heroes that died at sea during a battle. 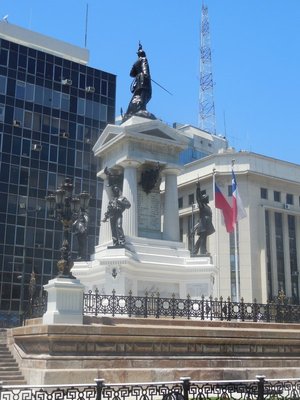 The piers were on the other side of the monument. We had a great view of the sea activity. This is a very active cargo port and I was able to watch some ships loading and unloading their containers. 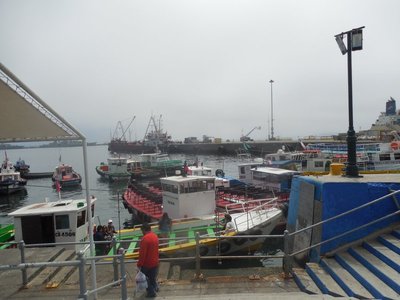 We got on a small ship for our boat ride. The captain took us around the bay and did a great job of explaining what we saw. He seemed to know intimate details about every other ship in port- how much cargo this one held, who owned that one, or where another took their fish. Some of the ships were military ships and he explained who used them for what. He also told us a bit about the city.
We had such a great view of the city from the bay. It rises up the mountains like an amphitheatre, so you can see all of the brightly-colored neighborhoods, important churches, and famous houses.
When we got off the boat, we got to walk amongst the city and the brightly-colored houses.

First, we took a historic cable-car through the lower part of the city to get to one of the funiculars. The cable car system is very much like the system in San Francisco, but the cars themselves remind me more of the Soviet-era cars like they have in Prague, and some other European cities. They're relatively "modern" and yet old. 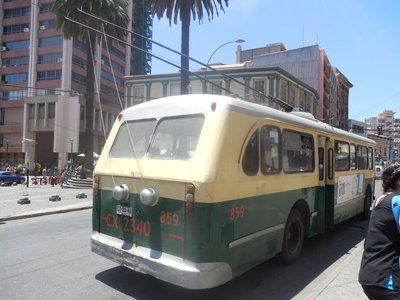 Next, we took one of the funiculars up. As mentioned, the city rises from the sea. Some areas are very steep, so the city installed "ascensores" to bring people between levels. They're not quite elevators, in that they ride a track, but they're much steeper than normal funiculars. The ones we rode were also more along the height of a building elevator than a funicular. They are windowed so that you get a nice view of the city out the window. In our case, we got to see a special cemetery. They've been declared a UNESCO world heritage site, and some are maintained properly as such. Others have fallen into disuse or disrepair. 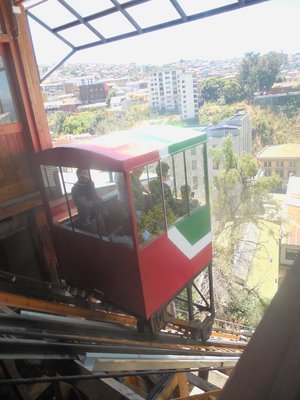 The houses and businesses in the old neighborhoods we walked through were all covered in street art or otherwise brightly painted. I guess people figured out that tourists would pay a loot of money to come see and stay in these art-covered buildings and also that graffiti artists wouldn't graffiti over the murals. Our guide also pointed out as we walked past the first buildings that had been built in the neighborhoods. Pretty much the whole historic area has been converted into boutique hotels and restaurants, so we were able to go into one of these historic buildings and check it out.
It is currently a boutique hotel that keeps the old-style maintained. The ceilings are very tall in the typical Spanish-colonial style, and the floors are gorgeously tiled. The furniture and area rugs are very clearly antique. The hotel feels like a museum, except that you are allowed to touch and use this one. 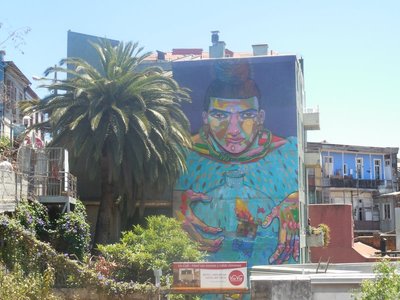 We continued walking through the neighborhoods and admiring the open-air art gallery that is the walls of the city. In a few streets, artists set up stations where they both made and sold goods. One girl had her pliers out and was making jewelry right in the street. Another guy was painting, and I even saw someone with a small bracelet-sized loom.
We descended a different funicular than we rode up, but it was similar enough.
Now, we finally had lunch! We ate chorillana at a bar called Mastodon. This is apparently where the locals go to eat, and what the locals eat there. Some of us tasted the beers, and the rest of us filled up on a massive quantity of food. We were split into 2 booths, and each received one huge plate. Chorillana is sort of "loaded fries." 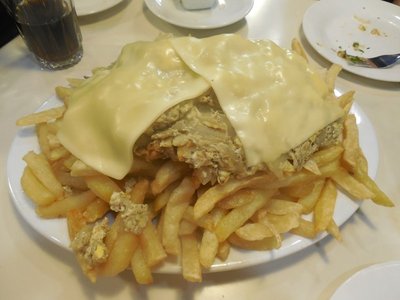 Our pile of fries was topped with egg, onion, and melted cheese. The other table had the same, plus beef. Despite three hungry mouths at each table, no table got near finishing their bohemoth. I thought it was delicious, especially with a squirt of the hot sauce from the bottle on the table, but it was just too much. I came away from there feeling as if I didn't need to eat anything for the next 3 days.
But of course, we all still had dinner at the hotel. It took a while to get back, and we all nappped in the car. Then, we met up with the two last missing members of our party and caught up on family gossip. Around 8, our tummies finally were willing to accept more food.
The restaurant was nice and the food was good, but I didn't really need to eat so much of it after that huge lunch. I can recommend the pumpkin soup though.
We went to bed a bit too late considering our flight is at 5am, but by staying at the airport hotel, at least we know there won't be traffic on the way and we won't have to worry about a late ride.

Posted by spsadventures 11:29 Archived in Chile