We got up relatively early and grabbed a quick breakfast of fruit. There were some normal fruits in there- green grapes, strawberries, melons- but there were also some unusual ones. The apples were identifiable, but not nearly as sweet as the ones we get in the US. There was also something unidentifiable. It was almost a cross between an apple and a peach. We went to catch the free bus to take it to Queen Victoria Market, but once we got to the stop we realized that it didn't start running for about an hour. So, we walked there. It was worth it. The market was huge! We started in the clothes section, where you could get a bargain on all sorts of souvenirs, scarfs, shirts, pants- even underwear! Then, we made our way to my favorite part: the food section. There were aisles and aisles of vendors selling fresh fruits and vegetables, an entire building of deli stands, and even a wine tent. I wish our hotel had a kitchen. The produce looked great. I would have loved to have been able to pick up some veggies to make something with. Plus, there was homemade fresh pasta that looked great. If only I had something to cook them in! Mostly, I wandered around the fruit and veggies section. I picked up a container of berries that had red, black, and yellow raspberries along with some kind of berry that looked like a mini bunch of grapes. It tasted more like slightly sweeter pomegranate seeds though. If I see them again, I'm going to get somebody to identify them because they were really good. I also picked up some cherries. I forgot that it's 2 lbs to a kg, not the other way around though, so I have about 4 times what I wanted. They'll just last the rest of the trip, I guess. After that, I started asking for items in volume, not by weight. My method of going around the market was pretty much just stopping at all the fruits I couldn't identify and asking what they were. I got these great tasting "chilli chips" that resembled mini baked churros and had a great flavor on them. I got some passion fruit and I also got some fresh lychees. At home, I've only seen lychees canned and most certainly never had to peel and pit them myself. This was an adventure. However, the real culinary adventure came when I asked about a fuzzy green football shaped plum looking thing. The guy at the stand was foreign and didn't know what it was called in English, but he told me to try one. I had to bite into it to break it and take out the middle, which turned out to be an almond. I have NEVER seen fresh almonds anywhere at home- not even Wegmans. Actually, based on how the fresh one tasted, I'm not surprised the roasted and coated ones sell better. Still, it was fun. I went over to the cheese section and got some fabulous King Island brie. It was just the right consistency- creamy like a thick sauce, not like the thick jello-like ones we get at home. The flavor was great as well. All of the cheeses I sampled were pretty great, so I got one more, some quince paste and this fabulously chewy Turkish bread. We wanted to get going on the Great Ocean road, so we left, but I could have spent hours more at the market and not have gotten to see and taste everything I wanted to. We got our rental car and headed for the ocean. To be completely honest, the first part of the Great Ocean Road was disappointing. I could tell the ocean was somewhere out there, but we couldn't really see more than a few glimpses every few minutes. Further down though, the views were spectacular. We drove, stopping at the tourist picture stops to take our photos, for quite some time. We stopped at a lighthouse as well. Finally, we got to a point where the road was right next to the beach. We got out and put our feet in the ocean for a little. On the way, we met a hang glider and saw his friends in the air. Apparently, that's the thing to do. I wish we'd had enough time to do it. The ocean smelled surprisingly fresh. Unlike Ocean City and the other beaches I'm used to, there was no smell of salt air. There were also not hordes of people all over the place, even though the beach was very nice and roomy enough that there could have been. We pretty much had the beach to ourselves. After our venture into the water, we turned around because we had to get the car back. We did stop on the way to take a picnic lunch of the stuff I got at the market the morning. We also stopped in Torquay, where EVERYTHING was surf-related. Even the library had "surf" all over it. By the time we returned the car and got back to the hotel, we were exhausted. the plan was: nap, go to this restaurant I discovered, go out on the town. Rachel started to take a nap that she thought would take an hour. At some point, Shanaenae and I fell asleep as well. Hours later, we awoke, only to realize that it was a little too late for our plans. Shanaenae kept sleeping, but Rachel and I went out to Chinatown for dinner. We walked around a little and then came back, only to pass out again. I guess a day in the sun will do that to you. 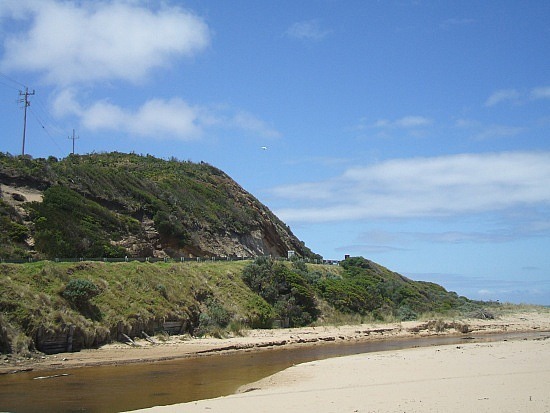 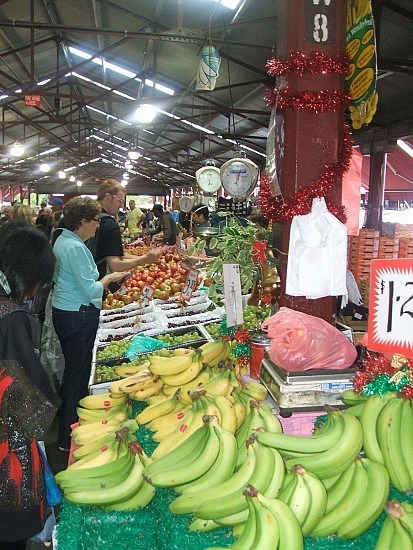 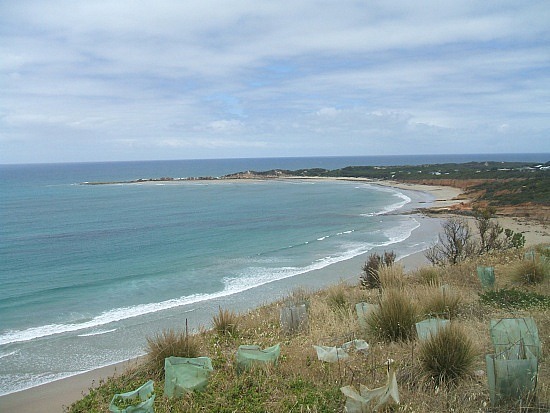