We woke suprisingly early this morning. We mostly enjoyed the breakfast we had picked up last night. The "default cheese" was Mantecoso and I liked it a lot, even though it's not crazy-strong. But we also got a multi-pack that contained the worst brie I've had ever. The strawberry milk was delicious and satisfying. And I enjoyed the spreads we picked up as well.

When we went out we first climbed up St. Lucia hill. This hill was the Spanish fortress during colonial times. From the castle at the top, we saw a great view of the entire city. On the way, we passed through many beautiful examples of Spanish colonial architecture, some of which reminded me a bit of Rome. 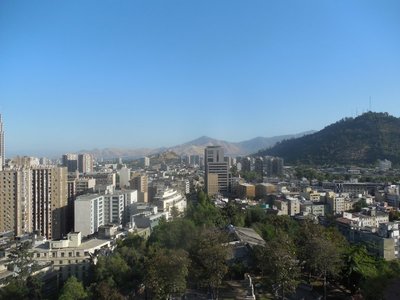 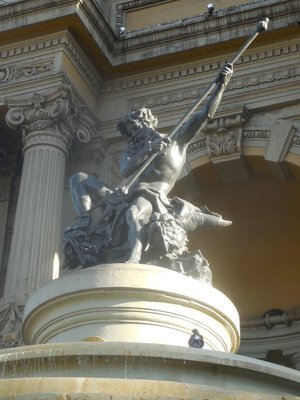 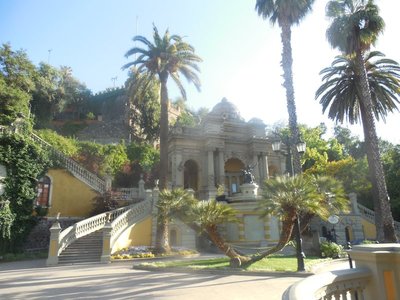 We also picked up a street dog. This dog followed us up the windy paths and stairs, and then back down again through the gardens. The dog followed us across the street until we ran into another street dog. I was sure that we would lose the dog as it played with the new one. But no, we became like the pied piper, accumulating dogs.
We passed through the main park in town. It is long, narrow, and extends for much of the old city. The dogs romped about as I climbed some of the really cool jungle gym equipment. And then as we left the park, the followed us out. They were suprisingly good at crossing streets safely by just waiting for us to cross. 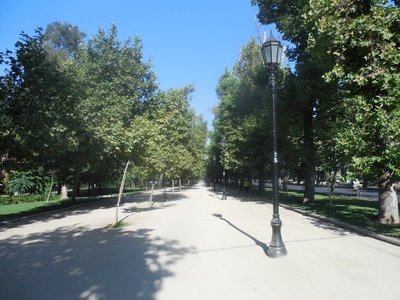 We trailed them through a neighborhood covered in beautiful street art. Most of the end of Santiago we're staying in is covered in graffiti. But this area had true art- murals and not just tags. 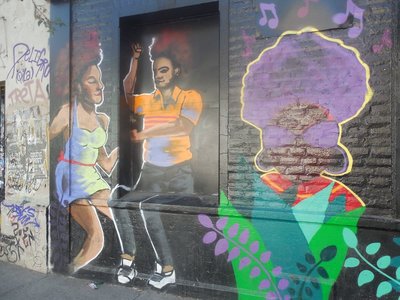 Somewhere around the base of the mountain, we finally lost the dogs.
Next, we braved San Cristobal. There are multiple ways to climb this mountain, and we chose the steepest. The paths are well-marked, and there are "hydration stations" for refilling your water bottle every few minutes. The first part was paved, as it's also for bikes, but the more direct (again, steepest) path is a dirt path through a wooded area.
Very close to the top, we stooped at a little cafe for "mote con huesillos" which seems to be the national drink, baseed on the number of stands all over town that sell it. Basically, it's a super-sweet peach juice (sugar-water) with a whole fruit and a bunch of wheat berries in it. It's surprisingly good, although I can't imagine that it's good for you. 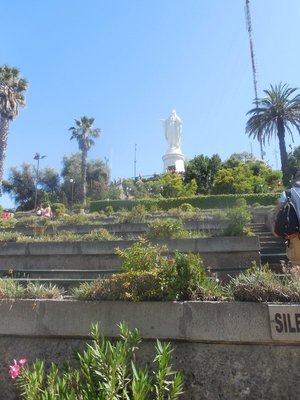 We continued to the top, where a big Mary statue sits atop a small chapel, which sits atop a set of ampitheater-like stairs, which sits atop the mountain. Christmas eve-day mass was blasting through some speakers as supplicants lit candles, left notes, and otherwise prayed nearby. 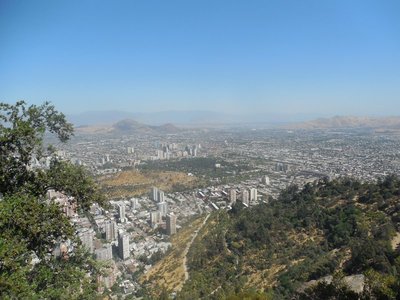 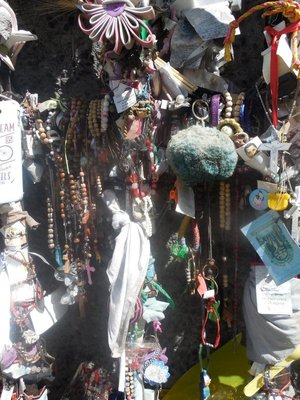 We took a more gentle slope down, although the path was longer. It was paved, but divided into different sections for pedestrians and bikers. The sun beat down on us, but at least we were headed downhill. Hundreds of bikers were headed uphill. 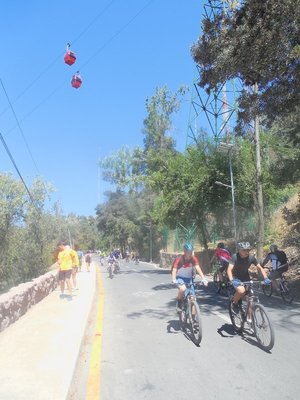 Upon arriving at the bottom, we headed back towards town. On the way, we passed a small house that contained a cafe (Vol's). We stopped for a lunch of sandwiches and milkshakes. They didn't have a large menu, but what we had was quite good.
After hiking 2 mountains, we decided that our feet could use a rest, so we metroed back to the air bnb and sat for a bit.
But not too long, because we wanted to take the free city tour at 3.
It meets at Plaza de Armas, so we got a chance to go into the Cathedral while we waited for it to start.
The cathedral is pretty typical for Spanish colonial cathedrals- apses, lots of statues of saints, Mary, and Jesus, some stained glass.
The tour mostly tok us through areas of town we'd already seen, but thee guide was able to explain their significance in a way that we wouldn't have figured out on our own. Also, we learned about Chilean history as it relates to various locations in town.
an example- the dogs that followed us this morning were strays. Without the guide, we wouldn't know that stray dogs are well cared-for in Chile. They get medical attention when needed, and the main city park has many doghouses that were built for the strays.
I really appreciated the way the guide presented the history, from the pre-Columbian groups to Pinochet, he engaged us in the stories he told. 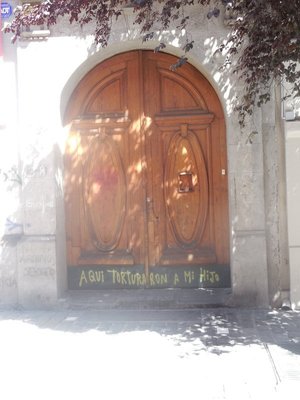 Pinochet torture site on the tour

We weren't sure what our plans would be for tomorrow (Chrismas) and not too much else was open, se we got our Chinese for dinner tonight. Much of the food was standard, although the cheese-filled eggrolls were a nice twist.
Because we had a long day and have another tomorrow, we went to bed early. Our neighbors did not. It's Christmas eve, which apparently means fireworks at midnight and neighbors partying loud until after 6am. Let's hope this is just because it's a holiday and doesn't happen tomorrow.

Posted by spsadventures 00:49 Archived in Chile