We landed at the airport, took the bus into town (1800 Chilean pesos/person) and found our air bnb.
The scenery here isn't too different from the ground- desert-looking mountains, but the Andes were amazing from the plane. The peaks of the mountains stuck out over the clouds. We saw a field of cotton fluff, interrupted by snow caps.
The bus took us through some less-affluent looking areas before we arrived by the universities, where we're staying. 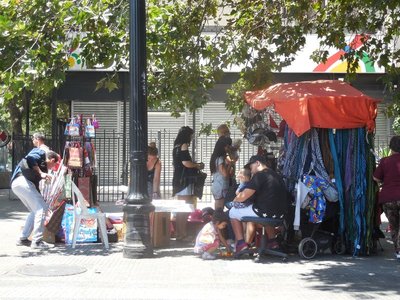 We got cleaned up a bit before heading more east to where my friends live. As we moved east through the city, our surroundings became more and more affluent. We passed a business district and finally the gated-community not-quite-suburbs.
My friends made us a delicious lunch and gave us a ton of tips- what to eat, where to go, and how to stay safe.
They say that Chile is relatively safe. People generally don't pull weapons and mug people movie-style. If you're going to get robbed, it would be the type where they grab your phone from your hand and run off with it while you're still startled, although that's not common either.
The water is totaly safe to drink from the tap, although it's highly fluoridated, so if you're not used to that, you might not want to chug it.
After hanging out with them at their place, they took us on a mini drive-by tour of the city- pointing out the good parks, good areas to eat, and good shopping areas. They also took us to Horacio's cat cafe.
This is a cafe that is full of cats. They have rescues, mutts, maine coons, and other beauties. These cats hang around the cafe all day. One wall is covered in cat playplaces, and they climb up and down. They are super-friendly and wil come sit on your lap, whether you really want it or not. The cats have free-reign over the place. 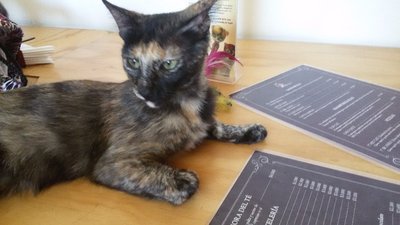 For cat-lovers, this is heaven. For the rest of us, the sight of all the fur flying about as the cats are petted, the sight of the cats sitting right on the tables, and the sight of a cat stealing a bit of cake right from a plate was a bit of an appetite-ender. But they have canned drinks, and I did enjoy that much. 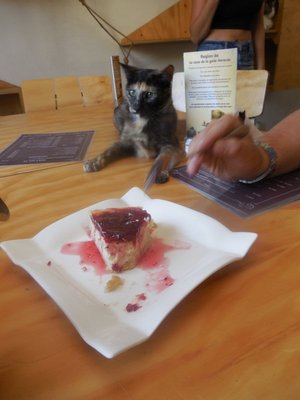 My friends showed us more of the city and dropped us at our apartment for a much-needed nap.

In the evening, we wandered out to check out all of the Christmas markets. We took a couple of detours into some malls, which were mostly more like the Asian malls than American ones. Each shop was a tiny family-run business and there didn't seem to be any chains. One mall was almost exclusively for video game equipment/electronics/collectables, and reminded me of a market more than a mall. We did pass some stores that were clearly chains and department stores, but those just weren't as prevalent as they are elsewhere. 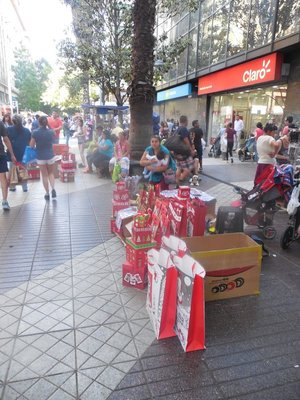 Outside the malls, vendors with all sorts of carts, tables, and blankets full of goods filled the streets. I'm not sure the ones with blankets on the ground were entirely legal. Periodically we'd hear a whistle or commotion and they would all pack up their gear and move aside. A minute would pass, and they'd set up all over again. Mostly, they sold clothing, accessories, toys, and gift bags. Very few sold food.
The most common street food we saw looked like beef soup with rice and corn thrown in. Apparently, Mote con Huesillos is actually a sweet peach drink with wheat berries. We also saw one churro cart in Plaza de Armas, and I can say that the Churros here are every bit as delicious as the churros anywhere else.
Plaza de Armas was crammed with people. 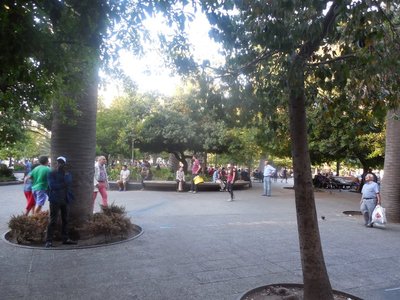 It was definitely the place to be. Performers gathered audiences around them. Characters in costume posed for pictures with kids (for a small fee, I'm sure.) Artists displayed bright, beautiful paintings. 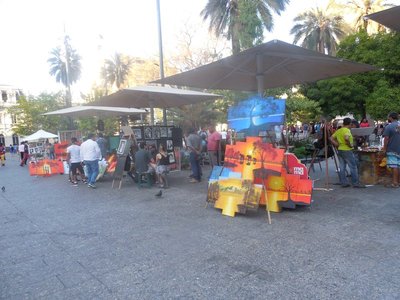 Couples sat on benches in the shade. Several chess players challenged each other in one corner of the plaza. This was a perfect place to get lost in the crowd and take in the local culture. 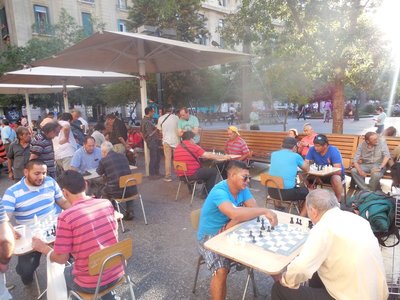 We popped in to a local grocery store to pick up provisions for tomorrow. The store had all of the things you would expect in any grocery store. I didn't see anything major missing or anything special that I hadn't seen before.
After, we grabbed dinner at Nuria, a restaurant recommended to us by my friends. Nuria has lots of local specialties- reineta (a fish that tastes like chicken), manchero?? con tallarines (slabs of meat and spaghetti with sauce), pastele de choclo (corn and other stuff pot-pie), and more. From what I gathered, the concept was great, but the execution was a bit lacking. My (white) pizza with hearts of palm and other toppings was ok though.
And then, we called it a night. We've barely been in the country 12 hours, but already we've see so much.

Posted by spsadventures 09:18 Archived in Chile