I got sent back to Taiwan.

The first several days here were pretty much work, eat, work some more, and then sleep. I didn't get to really see anything new, although I ate some new things.

Last time I was here, we passed a place that advertised vegan eel burgers. I didn't get a chance to get there because they always closed 15 minutes before I arrived. But my curiosity was certainly piqued. This time, I finally made it. Unfortunately, they happened to be out of vegan eel that night, so I ended up with a vegan pork burger and vegan pineapple shrimp. Neither were impressive.

I also broke down one night and tried the Chinese restaurant in the hotel. I just didn't have the energy to leave the building. It was also not impressive.

What was impressive was the Malaysian restaurant a few blocks from the hotel. The food there was quite spicy compared to the bland food I had everywhere else. I also really enjoyed Iroha Ramen, and not just because it was clearly named after an Avatar the Last Airbender character. The eggs were in this odd state where the yolks weren't runny, but also weren't quite solid. They were amazing. 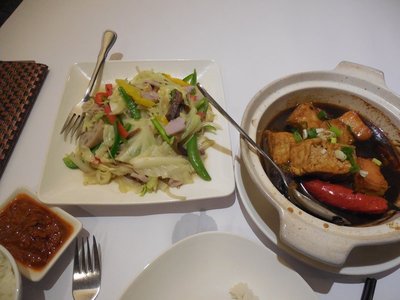 Hsinchu also has an amazing lego store where you can buy legos by the kilo or buy specific pieces. 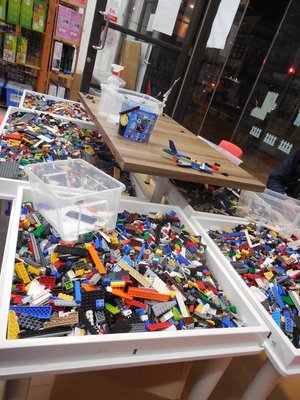 My other new experience was Taiwan in the rain. It wasn't heavy, but even a light rain made things interesting. Over half of the vehicles on the road here are scooters or motorcycles. They are cheaper, get better gas milage, get to move up to the front of the line waiting at a red light, and are easy to find parking for. In the rain, still more than half the vehicles on the road are motorbikes. Some people just put on normal jackets and let their pants and shoes still get wet. Others got creative with ponchos or had full-body rain jackets. Some of the jackets looked like plastic furniture covers that people use to protect their deck furniture in off-season. Even though the human furniture looked funny, if they were dry at the end of their commute, they were the smart ones.

The other "looks stupid but seems to work" thing is how they take care of trash. There are no public trash cans anywhere. The wind doesn't have an opportuniy to scatter trash from the cans, and people don't aim for bins and miss. They just take their trash home. The lack of dumpsters means there is nothing to attract scavenging wildlife and no major eyesores to hide. The city is actually quite clean-looking. So how does the trash get removed?

Well, that's what I thought it was. A truck drives very slowly down the streets, blasting the same kid-friendly tune as an ice cream truck. Except this truck is not telling the neighborhood kids to come get a sweet treat. This truck is letting the adults know that they can bring out their trash. The truck collects it and continues on its merry way.

Posted by spsadventures 10:33 Archived in Taiwan