Yesterday, I had noticed that the museum we saw atthe end of the day opened early- 8:30 am. As I am a much earlier riser than the guys, I decided to see that in the morning before they awoke and ate breakfast.

Of course, I got up way too early to just start at the museum. First, I walked the border between north (Turkish) and south (Greek) Cyprus. The border is in the middle of a walled city, and it is its own sort of wall. Some parts of the border consist of the houses and buildings that were there before. They're just empty and abandoned now. Some parts of the border are blocked-off streets. Some are blocked with piles of rubbish. Others with big metal cans. Still others have some sort of barbed wire. Many areas have UN guard posts and UN flags demarcating the area which you should not cross. 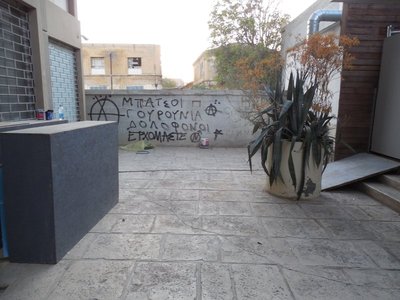 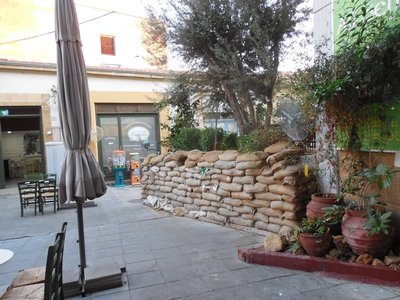 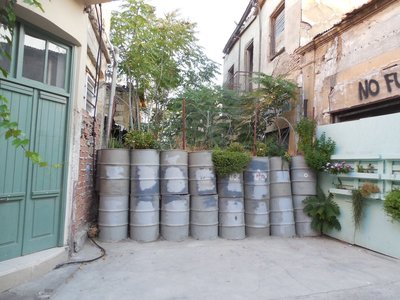 At the point where the border crosses the city walls, I followed the city walls. I got to see the famous Famagusta Gate, built in old times to give access to the city. It's no longer in use, as they've torn bigger holes in the wall for car traffic, but it still is pretty imposing. 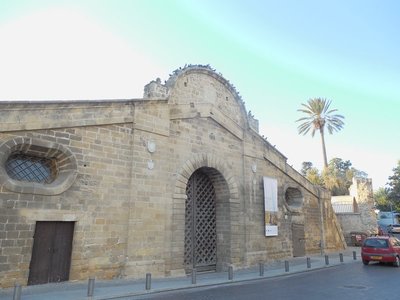 The city isn't that big, and it didn't take long for me to circle it all, but the museum still wasn't open. I popped by the location on the map marked "market," but it was pretty empty. I stopped to check on the guys, and then finally went to the museum, arriving right at 8:30. It was closed. I wasn't giving up though. I leaned against a fence across the street andwaited until a guy came and unlocked the doors.

I was the first one in the The Hadjigeorgakis Kornesios Mansion museum, and he had to unlock the exhibition doors just for me. The first floor exhibition gave some history and general background about Cypus-related things. The upper floors were set up as he would have had the mansion. This guy was a big hotshot during the Ottoman rule of Cyprus, and the house sort of shows that. One room was clearly an Ottoman tea room (like what we saw in Bosnia). His bedroom and other rooms his family used were also interesting. The courtyard was a bit dry, but I can imagine how nice it must have been during his time. 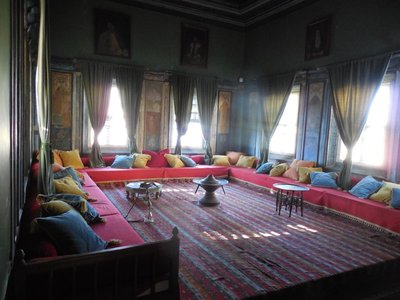 It didn't take too long to see the museum, and I headed back to meet the guys for the tour.

Today, we had scheduled a guide, Cemaliye Must. I highly recommend her. She arrived at our hotel right on time, and walked us through the border, explaining what we needed to know on the way.

The border was about 2 blocks from the hotel, right on the main street. It requires a passport, but they don't stamp it. First, you go through Greek Cyprus control, then walk a bit to Turkish Cyprus control, and then you pop out on the Turkish side in the middle of a shopping street very similar to what was on the other side of the border.

We got into the car and headed off to Famagusta. Our guide was super-knowledgable. She helped us understand the history of the island as well as the political situation behind what were were going to see.

Famagusta is a beach town that used to be bigger than Miami. Celebrities had homes here, developers put up high-rise beach apartment blocks, and people strolled the sand. 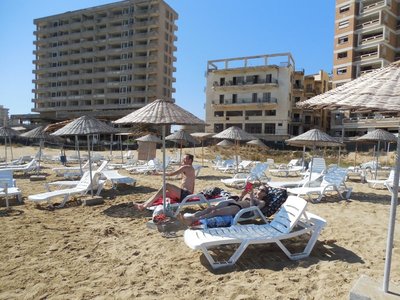 Then the war split the island, and the border zone went right through the town. Thousands of homes were now blocked off, inaccessible except to the peacekeepers.

We walked along the open part of the beach, just up to the border patrol building. We could see the desolation of all of the formerly-occupied buildings. And despite being quite nice, the beach was relatively empty as well. Only one hotel had rebuilt nearby, so not a lot of tourists were taking advantage of the area.

Next, we went to the old city area of Famagusta. We visited the ruins of the old palace, and the Lala Mustafa Pasha Mosque, which was originally the Cathedral of Saint Nicholas. The mosque had all of the elements of a classic cathedral- flying butresses, stained-glass windows, the altar space at the front. But in order to adapt it into a mosque, they added a beautiful carpet, reamoved the statues of the saints, and added a minaret. 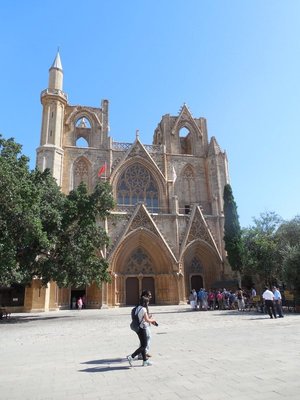 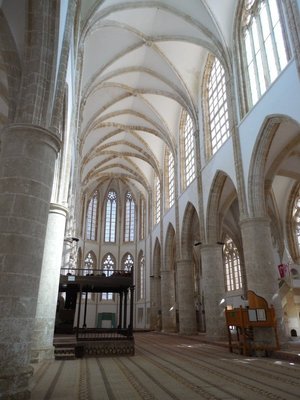 We walked around the old town, passing mostly souvenir shops and restaurants. I climbed up the old city walls and looked out over the sea, although the area was very industrial, so it wasn't the prettiest view.

Our guide took us to a cute little seafood restaurant with a very pretty view of the sea, before we moved on to Salamis.

Salamis used to be a capital of Cyprus, hundreds of years ago, but now it's just ruins. We walked into the old Roman gymnasium, where headless statues still overlooked a wide-open athletic area. We took a look at the Roman toilets- a long row of latrines with no barriers in between for any sort of privacy. Finally, we looked at the baths. Our guide explained how they had a series of cold and hot baths for different purposes, and how they heated the hot baths. 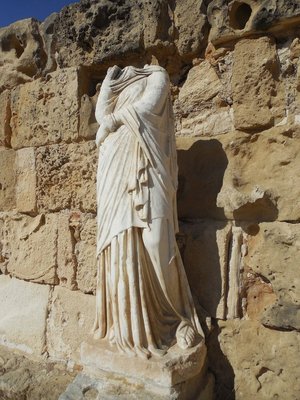 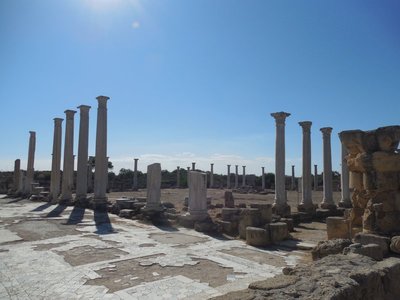 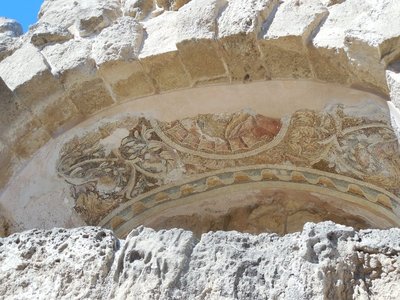 After Salamis, we made one more stop at another seaside restaurant for drinks, and then drove back to Nicosia. The drive out and back had given us a good view of Northern Cyprus. We noted that at this time of year, it's very yellow. There's not a lot of greenery, and the land seems very dry. We also noted that there are a lot of new housing developments arising in odd places. Some seem to be in the middle of nowhere, others are right on the highway. Beyond that, the scenery wasn't really anything to write home about.

We passed through the border without any issues to return to the Greek Cypriot side. Immediately across the border, there are a few nice restaurants, and we picked up some mezzes from them to eat back at the hotel. I really enjoyed their version of majadra. The stuffed grape leaves were ok, but the falafel ball was better. The salads were pretty good. I'd say that it was a successful traditional dinner.

After dinner, we took a bit of a walk along the main street, just to see what was open. Pretty much everything is- restaurants, bars, shops, you name it. It was a short but pleasant walk and we returned to the hotel.

We had forgotten to mention to the staff that our window needed fixing. The restaurant across the road from the hotel was open all night long. Based on the constant cheering, they were either showing a ball game, or having a frat party. If you're into hanging out at the bar all night, I can say that this place was open very late. I you're into sleeping through the night, make sure the hotel fixes the window so that it closes all of the way.

Posted by spsadventures 09:50 Archived in Cyprus