It's our last day in Cyprus. We decided to head back across the border to see the north side of Nicosia.

The north side maintains much more of the Ottoman history than the south side, and seems much older. We walked through old market places and saw Hans that had been used during Ottoman times. 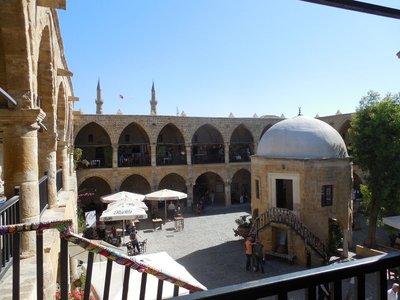 The big Han used to be an inn where caravans could stop and spend the night on their way to other markets. Currently, several artisans sell their wares from the upstairs, and a couple of restaurants serve patrons downstairs in the courtyard. 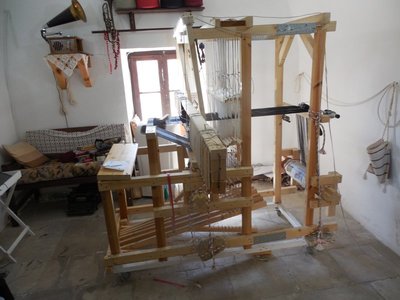 The stairs themselves were covered in yarn. I had heard about this project, but seeing it was something else. Some ladies cover various objects (trees, benches, bannisters) with knitted objects to indicate that they want unifcation and peace between two factions. 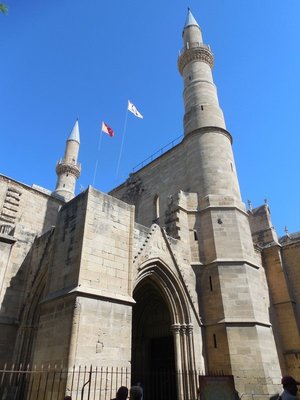 Next door, several times a day, a group of young men put on a Whirling Dervish show. They dress in plain traditional costumes. They start out in black coats, but then threw them off to reveal white clothes underneath. It represents throwing off your sins and being pures. They explain how the concept of "spinning your way to God" began in Afghanistan, and how the spinning affects them spiritually. Then, the music comes on and they spin. And spin. And spin. The guys were fascinated. I could have used a little something other than a half hour of guys in mono-chrome white outfits spinning to relatively slow music.

I understand that this is designed as a method of prayer, and not my own personal entertainment. Again, the guys loved it, but for me it had the "inauthentic" ascpects of entertainment and the "excitment" aspects of prayer. I was interested in the explanations at the beginning though. A running commentary would have worked for me. 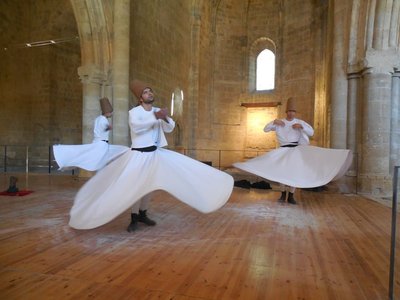 From there, it was a short hop over to a small market. This market had beautiful produce on sale, as well as "Cyprus Delight." Cyprus delight is a bit looser than Turkish Delight, but it's more or less the same thing with a different name. It came in a surprising array of flavors and colors.

We also stopped at a meat stand. We were told yesterday that the border folks often stop goods from being brought south from the north. It's not quite an embargo, but it's supposed to hurt the economy of the north and make them want to rejoin with the rest of Cyprus. But one of our party really really wanted to bring back sausage. We barely haggled with the sausage seller, but we got our sausage.

When we came back across the border, they didn't say anything or stop us. Maybe there is a quantity limit, maybe it depends on the mood of the guards that day, or maybe it was just well-hidden in my backpack, but the sausage made it!

Posted by spsadventures 10:20 Archived in Cyprus